We have plenty more information on Dragon Quest XI! Whoo!

We have endured a dearth of Dragon Quest games in the West for a number of years; however, that situation began to turn around late last year, with a spin-off release (Dragon Quest Heroes) and two remakes of Dragon Quest VII and VIII on Nintendo 3DS refreshing our parched dragon questing terrain since then. What’s coming for 2017, then? What looks like a corker of a console-cum-handheld game!

Square Enix revealed the opening cinematic trailer, new gameplay footage and further details of Dragon Quest XI: In Search of Departed Time at Jump Festa 2017. The game will launch for PlayStation 4 and 3DS in 2017. Dragon Quest XI is a stand-alone RPG (Dragon Quest X was an MMO) and is the first numbered series game since Dragon Quest VIII (PS2) to appear on a PlayStation platform. A Nintendo Switch had initially been indicated, but details have so far been withheld. 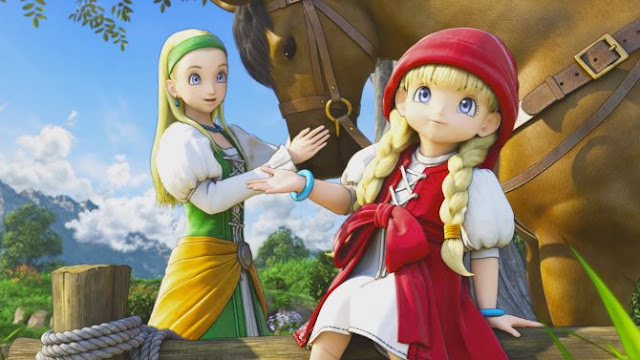 The world of Dragon Quest XI is called “Lotozetasia” and has the well-known World Tree at its centre. We’re being promised “A vast map comparable to previous Dragon Quest titles. It won’t betray your expectations.”

During a panel at Jump Festa, Dragon Quest XI Scenario Writer and Designer Yuji Horii, Producer Yusuke Saito and Game Director Takeshi Ichikawa offered some additional information on the game. Two regular DQ features are returning: the joke-y “Puff-Puff” massage scene – according to Horii-san it will be worthy of the culmination of thirty years of Dragon Quest – and the casino, which will have lots of minigames (features will differ slightly between the PS4 and 3DS version). The 3DS version will support Streetpass as well.

Interestingly, it makes no mention of the Nintendo Switch version. The likely explanation would be that Square Enix is delaying the reveal for a different event, possibly the Switch presentation that will be held in Tokyo on January 13

We are hopeful that Dragon Quest XI will make it to the West in the year of the series’ 30th anniversary! As you can see from the trailer below, the game is looking absolutely incredible:

Yeah, we’re getting a special Atelier game next year. Ohboyohboyohboy.

Related reading: Our interview with the new producer of the Atelier series on its new direction.

A teaser trailer was shown during Koei Tecmo’s “greatest lineup in history” broadcast, looking back at the Atelier series since 1997.

The latest game in the Atelier series is Atelier Firis: Alchemist of the Mysterious Journey, released in November in Japan and coming to the West next year. Since Gust has released an Atelier game every year (with just one year skipped) in Japan, expectation is high for a new game for 2017 in celebration of the anniversary.

We now know that Dynasty Warriors 9 is happening for sure

Related reading: Our interview with the producer of the Dynasty Warriors franchise.

Anyway, this trailer gives away absolutely nothing, other than to confirm the game’s in development. Of course, with each Dynasty Warriors game becoming more and more ambitious and large in scope, this teaser trailer has us well and truly teased.

The Longest Journey, published in 2000, is considered one of the truly great point-and-click adventure games. A sequel, Dreamfall: The Longest Journey, followed in 2006. The third (and apparently final) game in the series, Dreamfall Chapters, was released for PC in five episodes from 2014 – 2016. The Norwegian developer, Red Thread Games, has now announced that Dreamfall Chapters will launch on 24 March 2017 for PlayStation 4 and Xbox One, both physically and digitally, with Deep Silver as publisher.

So, how will this work, given that many people won’t be familiar with the original two games? To overcome this hurdle, Chapters includes a recap of the previous games to ease new players into the story.

Dreamfall Chapters is a 3D story-driven adventure game with puzzles and riddles, set in parallel worlds: one a dark cyberpunk vision of our future, the other a magical fantasy realm. The game follows two protagonists on their journeys across worlds to save the very fabric of reality from falling apart.

Related reading: Read our Review of Dreamfall Chapters: Book One: Reborn on PC.

The DDNet Awards! PC Game of the Year