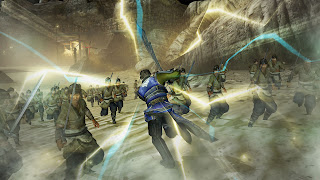 So understandably he (and his team) are riding a wave of positive energy right now. The previous major game in the series, Dynasty Warriors 7, was a critical and commercial success in itself, and it seems like the series is finally doing away with the previous reputation it had for repetitive, annual releases with little changed from the series’ beginnings in the PlayStation 2 era.

That negative reputation remains amongst some circles, however. For all the good work that Miyauchi and his team has done in bringing the raw concepts of Dynasty Warriors through the current generation and building the engine into a slick powerhouse for epic conflict, there are still people that misunderstand this series, believing that they are mindless button mashers rather than the vivid action games with a dash of historically authenticity and strategy that the masses of Japanese fans (and growing legion of western folks) recognise them to be.

Does it frustrate Tecmo Koei, Miyauchi and his team at Omega Force that they can’t quite shake that reputation? Apparently not, to hear him talk. “We don’t get frustrated because we know there is a core user base that enjoys our games for what they are, and if anything they like those aspects of play that aren’t necessarily changing all the time,” Miyauchi said.

“In order to satisfy those fans we keep some things in our games that seem like they don’t change from one game to the next. At the same time we do try and make some changes to the game so that the naysayers will hopefully find something to draw them in. So while we’re not frustrated by the feedback we do hear it, and we do try and expand our player base.” 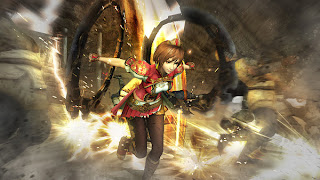 The appeal of ancient texts turned into games

With 13-odd years of game releases, what makes the Dynasty Warriors series so compelling that players keep coming back to this supposedly stagnant formula? And what have Omega Force and Tecmo Koei done to keep the story fresh?

After all, the Dynasty Warriors titles are based on a historical account of real events, and so the script, such as it is, has been set in stone from the very first game.

“One thing about the game that we have been doing [to keep things fresh] is even though the storyline remains similar with similar battles throughout the games, the character that is featured in those battles changes with every single title,” Miyauchi said. “So that it may be the same scenery and the context of the battle might be the same, but if the character you’re playing is different it’s doesn’t really feel repetitive as you’re seeing the battle from different point of views.”

Which leads us to one of the most popular features of the Warriors games – the sheer number of characters that players can take into battle. In Dynasty Warriors this number caps out to 77, and ranges from the most important generals of the era to the relatively minor heroes.

Managing so many storylines can be challenging, especially when historical accuracy is also an imperative. That sounds strange for a series that features warriors who are singlehandedly capable of mowing down thousands of enemy soldiers, but the backstories and the events within the Dynasty Warriors battles are as authentic as possible within the constraints of making a game.

And this should be of no surprise given the long history of respect that Tecmo Koei has for historical accuracy. Kou Shibusawa, the president of Koei-Tecmo Holdings and the founder of Koei before the merger with Tecmo, is the same mind behind the historical simulation Romance of the Three Kingdoms games.

“It’s not just our team, but the entire Tecmo Koei company considers remaining true to historical fact is important. Even with 77 characters we try and stay as true to history as possible,” Miyauchi said.

“But at the same time we’ve also added some original storylines as well in order to keep the story fresh for the users who have played it for so many years. If we just stuck with historical fact there probably isn’t enough that we can tell in the story, so to help distinguish fact from fiction we’ve added in an “if mode”, so we can clearly identify what is historical fact, and when storylines are based on fiction and feature some original stories that we’ve come up with.”

Miyauchi is especially excited by the power increases that the PlayStation 4 and Xbox One promise. As a developer, Omega Force is deservedly well-known for pushing a cinematic agenda in its games. It’s a team that has gone to great lengths to support 3D, and its engines are regularly unable to keep up with the raw processing power that the team’s vision demands. A common complaint levelled at Warriors games is that they nearly universally feature “pop in” of enemy soldiers, as a consequence of trying to render hundreds of soldiers on-screen at once.

By the same token Miyauchi is not sold on some of the more gimmicky elements that are making their way into the next generation of hardware. “With the next gen consoles the powerful hardware and the higher quality graphics I think we’ll be able to do a lot of different things with the series,” Miyaushi said.

“But in other areas, for example the touch pad [on the PlayStation 4 controller] we don’t know if there are elements in there that we can incorporate into our gameplay. Perhaps other titles from other teams can play with that, but I think specifically for the Dynasty Warriors series those touch pad, touch screen elements might not be the perfect fits.”

And so Miyauchi has a simple reason for why the team hasn’t gone to the expense of the difficult porting process from the PS3 and Xbox 360 to Wii U; the audience isn’t there for the game.

“We do like the Wii U and we have developed titles for Wii U, but Dynasty Warriors targets a core audience of Warriors fans and the Wii U hasn’t got many of those compared to on the PS3 and 360. And that’s why we haven’t focused on the Wii U yet. Because fundamentally the user bases are different.”

Additional reporting from the PAX Australia floor by Sam M.