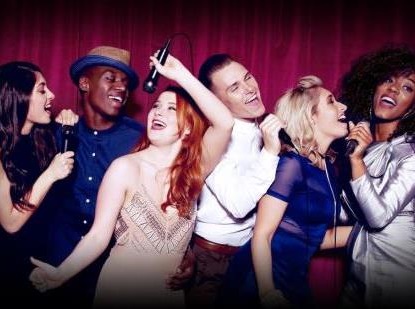 I recorded some footage of me singing along to We Sing. One of the tracks in the game is Eternal Flame by The Bangles. That there is my tune. I sing it virtually every time I go karaoke (the ultimate drinking event if ever there is one). And now, after listening to that recording back, I understand why people don’t go karaoke with me. I’m not going to put that recording online because I don’t want people to hold my singing voice against this game, because it deserves better than that.

Related reading: To add dancing to your singing party, grab Just Dance. Nick’s review of one of the editions on the Xbox One (though they’re all much the same).

We Sing is essential. Especially for parties. You might only pull it out a couple of times each year, as this is the kind of game that you’ll only really want to get stuck into when friends and/or family and beers are involved, and the developers have carefully designed around that setting. Up to eight players can join the fun simultaneously, either by plugging microphones into the PlayStation 4 or by downloading a companion app for smartphones and synching it up with the console. Then you simply pick a track that you all want to belt from the playlist out and compete with one another for the best score. If people have different tastes in music, it’s possible to set things up so the game runs through multiple tracks in sequence, and really that’s all you’re going to need.

We Sing is refreshingly focused. There’s no attempt to throw in progression, unlocks, or a “single player game.” Locking stuff away to encourage progression wouldn’t make sense when people might be left with tracks they don’t want to play. Because alcohol is likely to be involved when playing We Sing, the menus and user interface is slick an minimalist, so that anyone can understand what they need to do to get a game going, regardless of how sober they are. 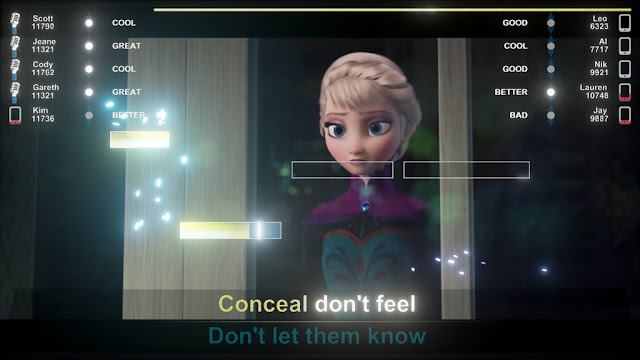 Even the scoring won’t frustrate people, as the game’s system is really quite generous with how points are accumulated. Even with my travesty of a singing voice I could manage a pretty decent score, because the scoring seems to be counted by being able to hold notes or shift pitch appropriately to the note that you sung previously; the game doesn’t actually care if you’re way off pitch, which is why I haven’t thrown the microphone through the TV yet. The game also doesn’t care if you’re actually singing or just “lalala”ing. It’s a bit like Ubisoft’s Just Dance series in that regard; you don’t need to follow the choreography there either; you can get away with just waving the controller in time with the music. In both instances however, half the fun is getting stuck into the spirit of the game and playing by the book, and generally speaking it’s easier to score well that way, simply because that’s the developers programmed the game under the assumption that players would be trying to play ‘properly’.

The tracklist is really quite well designed and balanced. There’s plenty of modern ballads and R&B tracks, and while those aren’t my scene I know others will get a real kick out of rocking along to Happy, and parents will rue the day they ever bought this game for their kids once they discover that the song from Frozen is on there. I know kids will want this game almost entirely on the strength of that song. I don’t understand it. I hate that song. Thank God I don’t have kids.

Digression aside, for those of us that grew up loving dorky music from the 70’s through 90’s, we’re covered too. When I was done with Eternal Flame, I got stuck right in to Cindy Lauper’s Girls Wanna Have Fun, David Bowie’s Let’s Dance, and so on. There’s also Britney Spears’ Baby One More Time, which is a terrible song but whoo boy was Britney pretty in that video clip. No Miku, but that clip’s about as good as they come. 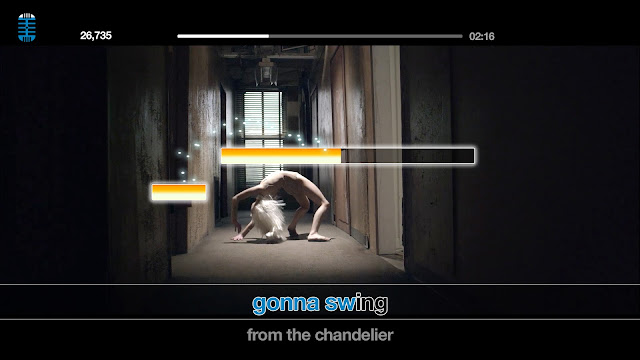 Which brings me to the neatest feature of the game’s presentation; each music track has the full music video playing in the background. From the utter weirdness of A-ha’s Take On Me through to the incredible modern clips, such as Sia’s Chandelier, We Sing has a really cool music TV show vibe, which in itself brought me back to my teenage years growing up and watching the music charts on TV each week.

If for whatever reason you want more music, there’s more incoming. THQ Nordic is in the process of developing We Sing Now, a subscription service that will allow you to stream a massive range of music to your compatible devices for more singing action; it’s in Beta now, but we assume it’s on the way to the console version of the game too. It would seem like a misfire to not have that feature ready for this year’s Christmas and New Year season, when the parties come on thick and fast, but it’ll add a lot of value to the base games to the karaoke fanatics.

There’s a lot to admire about We Sing. It’s a perfectly accessible karaoke game that comes with plenty of content and, in allowing ten people to play at once, it’s a perfect party title. Obviously your own mileage will depend on how much you enjoy singing, but hey, we all belt out some great performances in the shower, and this is just an extension of that. This is well worthwhile picking up if you’ve got a New Year’s party to host, or attend.