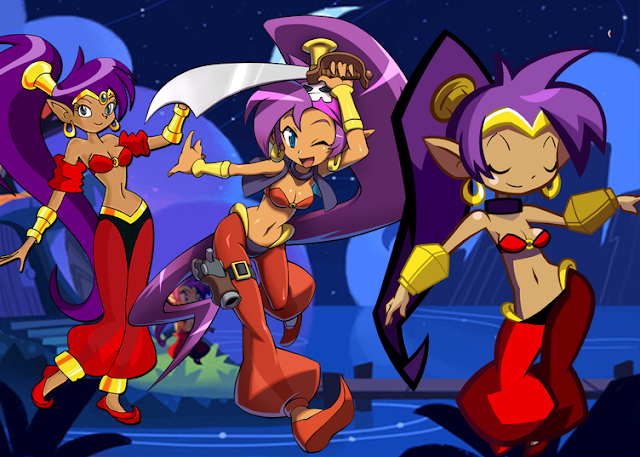 Upfront and from the start, it is so very, very cool that Shantae is finally in high definition. This series, which started out with a humble Game Boy Color game that had low circulation and received even less attention from both the mainstream and the typical niche for these kinds of games, has slowly but steadily grown into one of the highest standard 2D platformer franchises out there. One that people now pay real attention to, because aside from Nintendo’s own stuff, 2D platformers just don’t come better.

Related reading: Another of Matt’s reviews of one of the Shantae games on PlayStation 4.

WayForward, the modern genre specialist, has always led its Shantae games with a handheld first approach. And, while each of the games in the series have looked as good as 2D pixel art can allow, on the big screen each of these games have indeed looked like upscaled ports; overly large pixels and all. Now, with Shantae: Half-Genie Hero, we finally have a proper HD Shantae, and by golly is it gorgeous.

The great thing about the Shantae games is they’ve been set in such exotic locations – simply witnessing the world has always been a delight. I’m not the world’s biggest fan of platformers, but I play the Shantae games compulsively because, in an era of game design that is so completely uncomfortable with referencing the Middle East, Shantae is ballsy in its clear inspiration from 1001 Arabian Nights. This is by far my favourite fantasy setting, complete with genies, harem costumes, blistering hot deserts, the occasional refreshing oasis, eroticism, and that distinctive approach to music that immediately sets the scene.

Could watch all day. #PS4share pic.twitter.com/ubSpeXYAWK

There’s a clear love that the entire team at WayForward has for its characters and universe. The attention to detail with the smallest of elements, animation, and movement is immediately immersive. In any given level there is stuff happening in both the background and foreground at such a rate that you’ll barely notice it happening, but what you will be aware of is that the screen is perennially filled with motion, colour, and energy. Though there’s not a great deal of explicit storytelling going on through the game, the quality of movement through Shantae’s sprite gives her more personality than many RPGs manage in their most important characters. From the way she dances to transform into various animals (more on that in a second), to her running style and idle movements, all give this easy impression of a perky, upbeat character who brightens the world.

I would still like to see Shantae in a JRPG or more narrative-heavy adventure game. WayForward has created a character of such inherent interest that I tend to feel she’s outgrown what the platformer genre can grant her. That being said, Shantae is my favourite character in 2D platforming, and the additional detail afforded her with this new art engine only enhances her appeal further.

Shantae: Half-Genie Hero is also deeply humorous. Shantae can buy bikini armour, and the description states that “this armour halves damage taken”; surely a bit of satire about how women’s armour generally works in most games. Then, when talking with a little boy, he asks her if she’s a medusa because his “mother always tells me to avert my eyes when you’re around.” This is because Shantae’s harem costume doesn’t have much more material than the bikini armour. I don’t intend to give away too many of the surprises, but there’s also a level early on where Shantae is trying to rescue the young girls who have been kidnapped from a village, and when she finds them, they’re being pulled around on a conveyor belt to be turned into mermaids as a fish leaps out of the water to swallow their legs. This sight is surreal to behold, and downright funny in how it’s executed. 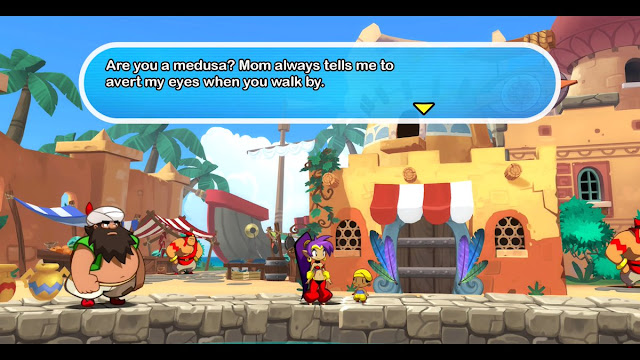 While Shantae: Half-Genie Hero isn’t the longest game, it’s deeply fulfilling from start to finish, and there’s not a second of its runtime that is not dripping with style and panache. It’s perhaps best as a short-and-sweet experience so that its humour and personality don’t have a chance to wear players down. Additionally, the level design manages to be creative from start to finish, and the general lack of repetition is due to the developers not feeling the need to pad the game out; but I know there are also going to be players who would like to see more.

Every second of it is a delight to play as well. Shantae’s movement is slick, fast, and graceful. Her enemies are universally interesting in their movement and behaviours, making each new level a delight to play through. The bosses are incredible and perhaps the best example of the creative freedom that HD design has allowed WayForward. In addition to her standard hair whip attack (which has never got old, and I’ve played a lot of these games now. It’s just too sexy) and magical abilities, Shantae can also do a little belly dance to turn into one of a number of different animals, each with their own abilities. The monkey, for example, is not only the cutest thing you’ll have seen this year, but is also good at climbing to areas that Shantae wouldn’t otherwise be able to reach.

These animal companions infuse the levels with some light puzzle elements, but also encourage players to go back to earlier levels to reach previously inaccessible areas as they unlock new abilities. Shantae: Half-Genie Hero is more linear than some previous Shantae games, which provided players with what amounts to a true Metroidvania free-roaming experience. This one is more structured into firm levels, which help players to understand where they need to go to next, while also encouraging them to come back and replay levels. The level design in the game is superb in subtly challenging players to find stuff that’s just out of reach, though in contrast to that I also found some sections to be more traditional “pixel-perfect platforming” than my lack of platforming skills are comfortable with. Another testament to the quality of the game elsewhere is that I sat through those sections. 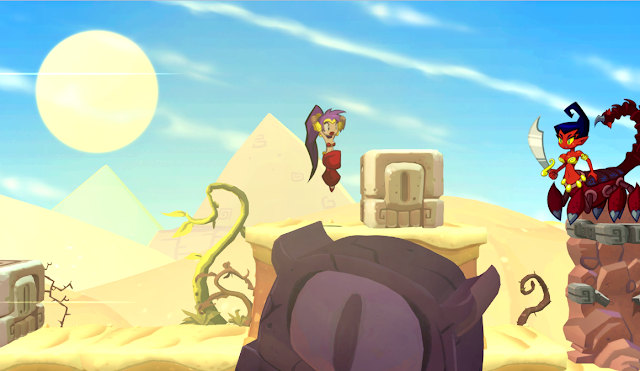 Related reading: The harem costume; tracking its history and its application in games.

Shantae is a series that continues to go from strength to strength, with each new game adding so much more than new levels and plot points to the franchise. This game’s obvious new feature is its HD art, and, more than just being beautiful, the ability of this art to enhance the characters and world makes Shantae: Half-Genie Hero the most impressive take on the whole fantasy Middle East setting since the utterly brilliant Prince of Persia: Sands of Time.