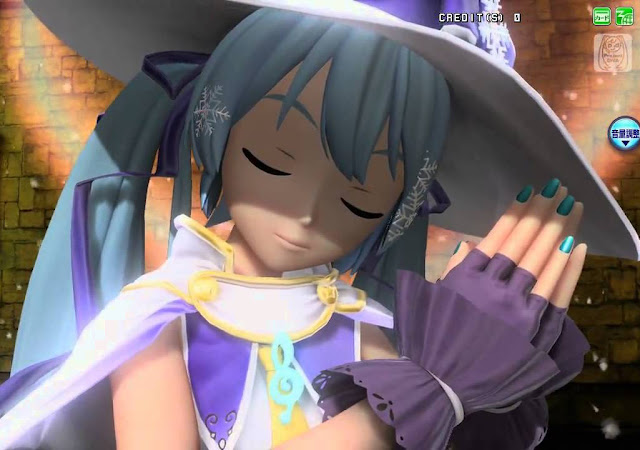 ‘Twas the night before release, when all through the house

Not a creature was stirring, not even a mouse;
The headsets were hung by the chimney with care,
In anticipation that our queen, Miku, soon would be there;
The children were nestled all snug in their beds;
While visions of cherry blossoms danced in their heads;
And mamma in her ‘kerchief, and I in my cap,
Had just settled our brains for a long winter’s nap,
When out on the lawn there arose such a clatter,
I sprang from my bed to see what was the matter.
Away to the window I flew like a flash,
Tore open the shutters and threw up the sash.
The moon on the breast of the new-fallen snow,
Gave a lustre of midday to objects below,
When what to my wondering eyes did appear,
But a miniature snowboard and gorgeous green hair
There did I spot a girl so lively and quick,
I knew in a moment he must be her, Miku!
More rapid than eagles to m home she came,
And she whistled, and shouted, and sung them by name:
“Now, Miku Miku You! now, Tell Your World! now Senbonzakura!
On, Nostalogic! on, World is Mine! on, Romeo & Cinderella!
To the top of the porch! to the top of the wall!
Now sing away! sing away! sing away all!”

And then, in a twinkling, I heard on the roof
The prancing and pawing of vocaloid pacing soft.
As I drew in my head, and was turning around,
Down the chimney did Mikuhime came with a bound.
She was dressed all in delightful green, from her head to her foot,
And her clothes were all tarnished with ashes and soot;
A copy of Future Tone had held in her hands,
And she looked every bit the diva winning over the world.
Her eyes—how they twinkled! her smile, how merry!
Her cheeks were like roses, her nose like a button!
She had a round face and a stunning, flat, belly
Her hair flowed when she laughed, with the grace of a fairy,
She was beautiful and lithe, a right jolly old elf,
And I laughed when I saw her, in spite of myself;
A wink of her eye and a twist of his head
Soon gave me to know I had nothing to dread;
She spoke not a word, but went straight to his work,
Dropped a copy of the game at my feet; then turned with a jerk,
And laying her finger aside of her nose,
And giving a nod, up the chimney she rose;
She sprang to her snowboard, and gave me a whistle,
Before flying away like the down of a thistle.
But I heard her exclaim, ere she drove out of sight—
“Happy Miku day to all, and to all a good night!”

It’s Christmas Eve here in Australia. We wanted to quickly update all our loyal readers on what’s going on with DDNet over the break.

First of all, we will be taking a break between now and January 3. If we didn’t Matt would go utterly insane, and he’s already crazy enough. There are a couple of articles that you can look forward to between now and then, though, including a special end of year podcast, so please do stay tuned!

As of January 3 we’ll be back in full, and with that comes a whole lot of premium articles for your reading pleasure! It’s been a bit hard to keep up with everything with the awards and so on this month, but things will settle down from then.

Thank you to everyone for your support this year! We only keep this site going for our readers, of course, and we look forward to an awesome 2017 with everyone!