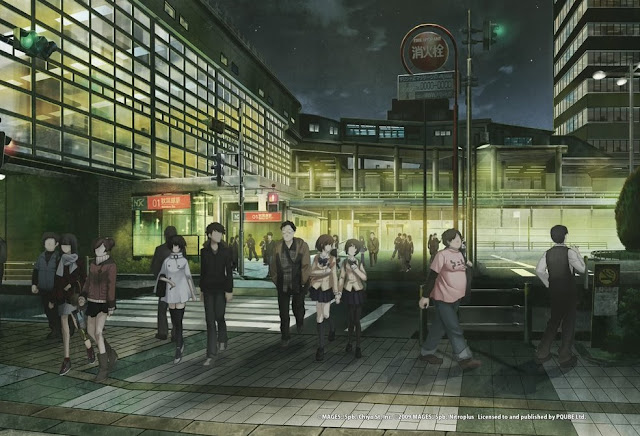 Steins;Gate is one of the best visual novels that you’ll ever play. Indeed, it’s a big part of the reason that more and more visual novels are coming out west – PQube hit some real success in localising the original and now other niche publishers want in on the action. Its sequel, Steins;Gate 0, is if anything even better.

Related reading: It is essential that you play Steins;Gate before this one. Matt’s review of that game here.

Steins;Gate 0 is a game that is going to be difficult to review, as it’s a direct continuation of one specific ending of the original game. I don’t want to give away spoilers, so I apologise that the below is going to read quite vague in places. I’m doing it because I love you all and don’t want to ruin either game. If you haven’t played Steins;Gate before (why have you been waiting?) then do so before digging in to this game.

The original Steins;Gate was a masterpiece of storytelling, and not just because it told a ripping good yarn. What made the game so completely intriguing was just how immersed it was in Akihabara culture, and how it both deconstructed and examined how Akiba’s unique subcultures worked. Rintaro, the lead, was a chuunibyou. The broad narrative dealt with Akiba’s love of underground alternative philosophy and mania; in that case, the obsession with time travel and fringe science. In playing Steins;Gate, you can feel the pulse that it has on otaku cultures, and the nuanced storytelling balance between parody and reflection made that game a near-thesis on one of Japan’s most misunderstood and ridiculed social environments. 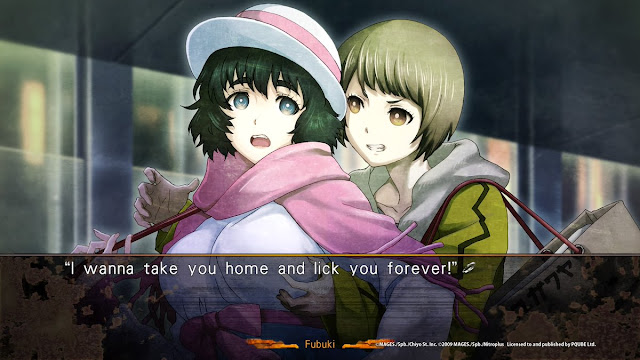 Steins;Gate 0 does similar, though with less levity and a theme more directly related to society today. In Steins;Gate 0 the characters are grappling with death and the ethics of AI. Without giving too much away a group of scientists have created technology that allows a person to download their thoughts and memories into an AI software, that is then capable of developing its own personality and creating new memories. The scientific organisation in question has done this to a dead friend of Rintaro’s, giving him a chance to interact with his friend again.

Whether that is a good thing or not, and whether this artificial being is ‘real’ or even ‘human’, are the key themes explored through the game, and they are poignant themes because they very much apply to the real world. Steins;Gate’s themes were largely the product of fantasy because, if time travel is ever going to happen, we’re a long way away from it. But make no mistake, we are verging on the ability to download entire personalities into software to continue a ‘life’ after the person has deceased. Researchers are making great strides in this field, as the TED talk below shows. Our technology for bringing digital beings into the real world is becoming more and more advanced. I rave on about Hatsune Miku plenty, I know, but we are not far away from having the technology to interact with her as we would normal people. Does she become “real”, or even “human,” then? It’s going to be important to make this distinction.

Indeed, the game often seems to be directly pointing to Miku and other vocaloids through its analysis of digital personas. Every so often a character will pop up with a comment that directly references vocaloids or the culture around them, and even in little subtle ways it is constantly calling back to them. It’s possible to customise the ringtone on Rintaro’s phone, for example. At least one of the songs is an explicit riff on a popular vocaloid track (Luka Luka Fever. I never got around to checking the other ring tones, because that one is perfect). Steins;Gate 0 was developed with the full knowledge that digital celebrities were pushing even the likes of AKB48 out of their home turf in Akihabara, and it clearly wants us to consider the implications around this.


There are ethical and moral discussions that need to happen over this. This technology is going to have remarkably poignant impacts on every layer of social interaction, right through to the understanding that we have of humanity itself. These themes are only addressed at a general level in Steins;Gate 0, but they are certainly there, and this is, in part, why the game has a sharper edge than its predecessor. Where the abstract philosophy of time travel is less real, and therefore easier to be playful with, Steins;Gate 0’s themes hit far closer to reality, and, coupled with the musings over death, make for more consistently darker material.

That’s not to say the game is always serious, however. Steins;Gate 0 also remains an effective observation, critique, and satire of Akiba culture, from the over-the-top sleaziness of the ‘gentleman hentai’ Daru, to the equally over-the-top cuteness of Mayuri, Steins;Gate 0 carries across the same larger than life character personalities and well-written, but deliciously-ridiculous antics that they all get up to. Rintaro himself is a greatly reserved character this time around (given his circumstances, this is understandable), but we also experience the point of view from multiple perspectives this time around, and so right after Rintaro has a serious conversation with the AI, we cut to a group of cosplay girls talking nonsense about conventions, boys, and then the tomboy of the group is grabbing Mayuri’s boobs. The fanservice is minimal in the game, and adds depth and context rather than being thrown in there for the sake of titillation, but its presence set against such otherwise serious tones goes to show the range that the game writers move through.

Indeed, while I drew the most from the game’s examination of morality and ethics in AI and digital people, that’s because that’s a topic that interests me greatly. Other people will focus on different elements of Steins;Gate 0’s rich narrative, and it’s deep enough that, each time you read it through, you’ll take something different from it. Time travel is still a critical theme, for example. Absolutely so. You’ll come across a whole bunch of themes that return from the first visual novel, and some new ones besides. Much like a good book, the layered narrative strands of Steins;Gate 0 function well, both separately and in concert, and make for the kind of story that you can enjoy both as ‘page turner’ as well as the kind of thing you can get stuck into during a wine-and-philosophy session. 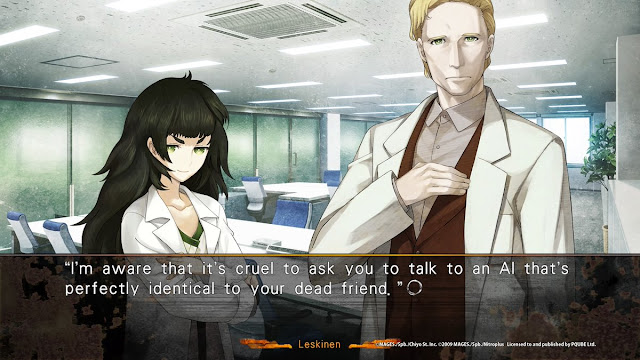 Of course some people won’t see the point in Steins;Gate 0. As with its predecessor, it’s barely interactive, even by visual novel standards. There is the occasional decision that you get to make, and these decisions affect how the plot plays out, but with very little indication that you’re heading towards a “good” or “bad” ending, they feel like an arbitrary reason to replay the game in order to see what impact different decisions has. Steins;Gate 0 doesn’t need to “force” you to replay it. You’re going to want to anyway.

Related reading: There’s no shortage of great visual novels in English these days, but another must-play that released recently is Root Letter. Matt’s review of that one.

And while the game is utterly beautiful, with one of the most distinctive art styles that you’ll ever see, so many will dismiss it for its lack of animation, or the overtly ‘anime’ style that it expresses. It is disappointing that so many will find reason to dismiss what Steins;Gate 0 offers, because it really is one of the best interactive experiences you can get on the PlayStation 4, but there’s no accounting for taste with some people, I guess.

Steins;Gate already demonstrated just how far the visual novel could be pushed towards an experience with genuine literary merit, and the sequel pushes things even further. This is a highly relevant game to some very real discussions that ethicists and moral philosophers will be pondering in the years ahead, and at the same time it tells a ripping, entertaining story. A real masterpiece on every level, and one of the best games I’ve played all year.