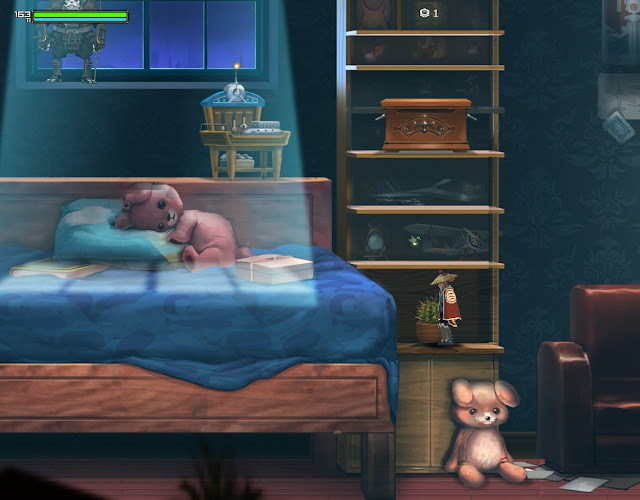 With a creative theme, a charming story and a nice mesh of 2D roguelite and action elements, Toy Odyssey: The Lost and Found is a really solid indie title that is a lot of fun despite a handful of smaller, easily-forgiven flaws.

First, the handful of things that keep Toy Odyssey from being an absolutely fantastic game. I want to touch on those so we can get them out of the way and talk about everything else. The mission structure is rather lacking in variety, so while you will have lots to do, at the heart of these objectives the formula really does not change up a whole lot. The story is effective because it draws on elements from most of our childhoods, though the narrative itself is pretty light and could have used a bit more depth. The menus can be a little muddled at times, with small text and dark font that makes important information somewhat hard to see. Every now and then, the camera seems to jerk out of place and the environments, while a high point, can create some confusion as it can be tough to tell at a glance what you can or cannot stand on, at least early in the game.

Okay, we have those things out of the way, but if you are willing to look past those issues in favour of spending your time on a Metroidvania-style game with item crafting, some different unlockable skills, randomised areas to explore and an incredibly cool aesthetic, then Toy Odyssey: The Lost and Found will likely work really well for you. 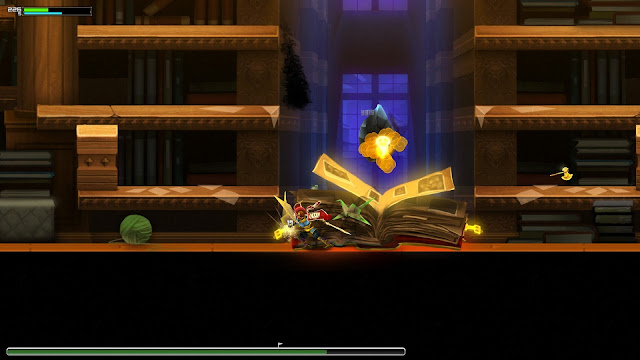 First and foremost, we have the scenario. You are a toy who is trying to help a young boy manage his nightmares. This works on several levels for the same reason movies like Toy Story do. We all had dark rooms growing up, toys that we ‘brought to life’ and imaginations that always made us wonder ‘what if our toys are alive?’. Nightmares are also something that tend to impact us as children. There is this state of helplessness as a child suffering from a nightmare, and all of these little points weave together to make for an interesting game aesthetic as you take control of a little warrior toy who starts every night in the bedroom before venturing out into the dangerous world that is the rest of the house.

Your toy will ‘die’ a lot in this game, and each night you come back to life ready to venture forth again. The rooms are randomly generated each night as well, so these two elements combine nicely to give Toy Odyssey a roguelike vibe that works well with the rest of the game. While adventuring out each night, you collect currency used to upgrade your character’s equipment (which provides perks like extra life, stronger secondary weapon attacks or unique movement abilities like a double-jump). You go about collecting random items you can use to upgrade your base in the bedroom and fend off enemy attacks as well. This base is pretty cool, with a lot of additions that can be built and as you rescue other toys, you can assign them jobs at the base. So while you are journeying, you are not just looking for other toys to help, but things like rubber bands and giant nuts that can be used for the building recipes back at the base.

Toy Odyssey is a friendly enough game due to the way your inventory of items come back with you upon death, so it is not a true roguelike with incredibly punishing rules upon demise. Still, the game can be pretty challenging. Most rooms are pretty dark when you enter, making them creepy but at the same time it can be hard to see enemies unless you are paying really close attention. Finding the room’s light switch helps because striking it does provide some illumination. There are a fair number of enemies, with some interesting attack patterns. Giant rats and spiders? Check – they will come right after you. Soldier toys? Sure thing – they look to shoot at you. As you might guess – vehicular ones will try to run you over and so on. There is a pretty good variety here, and that works because they make you think of toys that have been lost and become evil – which is at the centre of the story. 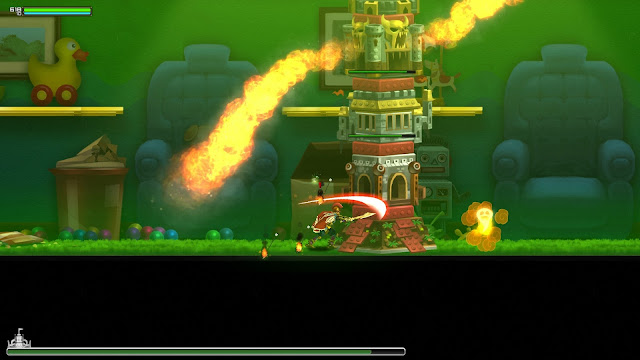 The story itself works to help set this creative stage, but it is a little thin. I was several hours in before I even had a notion of the endgame and some sort of a boss to deal with. Mostly I was hearing about toys who were stranded out in the house and needed me to rescue them and bring them back to the base. All of this works great with the visual aesthetic filled with oversized chairs and boxes, your character jumping around shelves and tables that make perfect sense within the context of these rooms. Admittedly the moving platforms hovering in the air are a bit less logical, but necessary for the gameplay as many of the rooms have both vertical and horizontal elements to them.

Those who are good at action platforming games will get the most out of the action. Jumps can be oddly spaced due to the randomised nature of level design, and you have plenty of flying creatures (toy UFO anyone?) trying to shoot and body check you along the way. At times the inability to cleanly tell what you can or cannot land on does make the platforming a little frustrating at times as you try to navigate enemies and the environment at the same time, but after a few ideas I generally knew what I could land on what and was going to let me fall on through to the floor way below (and some pesky fall damage).

All in all Toy Odyssey: The Lost and Found works because the game tickles our minds based on a time when our imaginations were their most fertile: childhood. I know my toys often waged large-scale war with one another all over the living room and this game captures that in its level and character design as well as the central narrative revolving around a young boy and his nightmares.