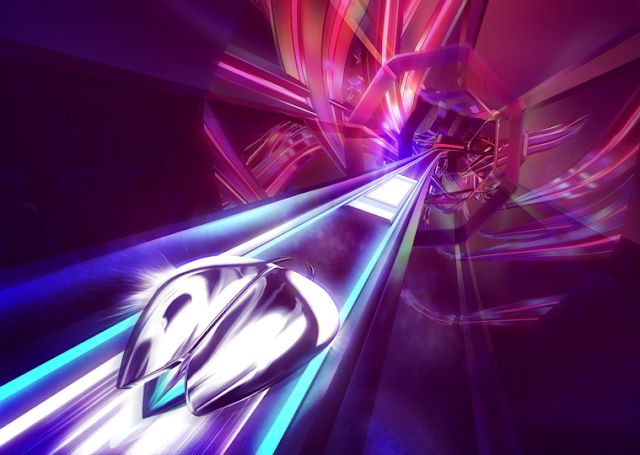 Thumper is described as a “rhythm violence game”, which seems fitting for a game that regularly makes me want to throw my controller at the head of the next passerby. One could also call it a “rhythm masochism game”, because as infuriating as it is, I find myself compulsively coming back for more punishment.

The premise, inasmuch as there is one, is that you’re a space beetle locked in a seemingly endless fight with Crakhed, a maniacal giant head from the future. How do you fight something like that? By hurtling along a sci-fi bobsled track at breakneck speed, smashing into walls and barriers in time to a thumping hardcore techno soundtrack – as you do. If that sounds bizarre, it’s because it is; Thumper doesn’t make a lot of sense, but that’s part of what makes it such an assault on the senses.

The basic mechanics are as simple as any rhythm game – press buttons, as prompted, in time to the beat – but in Thumper’s case, those markers are things along the bobsled track that you avoid or deliberately smash into. A blue mark on the floor means you have to tap X to do a little hop on the beat, for example, while string of spear-like projectiles strewn across the track means you need to hold X to shield your beetle and smash through them. A curved red wall tells you to hold X and tilt the thumbstick away from the surface, so that you slam into it at the right angle and grind around the corner instead of just crashing and dying. 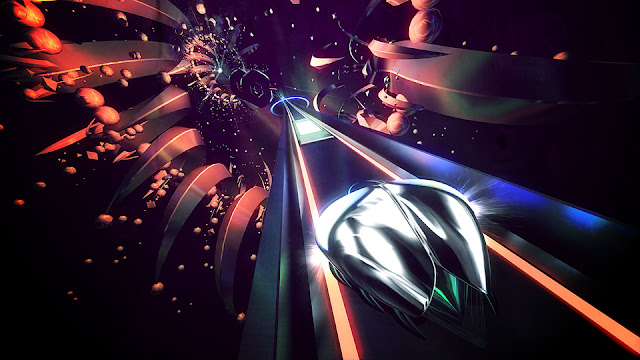 Like any good rhythm game, there’s an abundance of depth beneath these simple surface-level mechanics, and mastery will take many, many hours of practice and failure. Each new level introduces some new idea to build upon what’s come before, building up to some incredibly complex beat maps that are nightmarish to just finish, let alone to try get a perfect score on.

Thus the aforementioned urge to throw the controller. To Thumper’s credit, though, frustration is intense but momentary, quickly giving way to the urge to try again. Each level is broken up into bite-sized segments, and dying sends you back to the start of whichever segment you’re on. Death comes swiftly, but you never lose too much progress, and victory is always on the horizon, taunting you. Thumper is brutal, but it manages to avoid the tedium that so often comes with such design.

That said, it does get to the point where even with these concessions, progress becomes nigh impossible. Judging from trophy numbers, just completing the game is a feat that just 2 percent of PS4 players have achieved, which is to say nothing of the lofty goal of getting perfect scores. For my own part, I’m stuck on level 5 (of 9), and even that measly result puts me in a fairly exclusive group. Even by rhythm game standards, Thumper is harsh, and I doubt I’ll ever get good enough to actually beat it. You win, Crakhed. 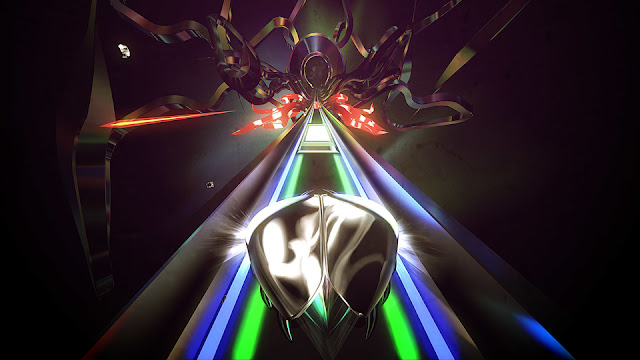 Thumper’s oppressive, outlandish atmosphere is a good fit for that relentless difficulty. As I said before, you’re chrome space beetle riding what’s essentially a bobsled track, but even that doesn’t capture just how strange the world of Thumper is. It’s a psychedelic mess of colours, and not in a fun, happy way; rather, it’s strange, unsettling, and outright terrifying at times. It defies description, really.

Add to that the intensity of actually playing, and you have a game that – like I said before – is an assault on the senses. Through clever use of fairly standard visual techniques like screen shaking and lighting effects, Thumper manages to convey a sense of weight and impact that could give the most hardcore shooters a run for their money. Your little chrome beetle feels like a cannonball hurtling through space at thousands of miles an hour, crashing into the walls of the track with all the force that comes with that.

That’s also why I imagine this is a game that really needs to be played in VR, though sadly, without a PSVR of my own, it’s not something I could try out. It’s such a kinetic and forceful experience that it feels like it’s jumping out of the screen even when I’m just playing on a regular TV, so I can’t begin to imagine what it’d be like in virtual reality. What I do know is that this is going to be the very first game I fire up when I eventually do get a VR headset – hopefully that’s sooner, rather than later.

Thumper is a very good rhythm game, if obscenely difficult, and that should make it appeal to any fans of the genre. But it’s a lot more than that, too; it’s an experience unlike any other, one that pushes the bounds of pure audiovisual immersion even with its standard 2D display – to say nothing of  its VR capabilities – and that makes it something that I think everyone should at least try.

– Matthew C.
Contributor Find me on Twitter: @MC_Odd
If you like my writing, please consider supporting me on Patreon