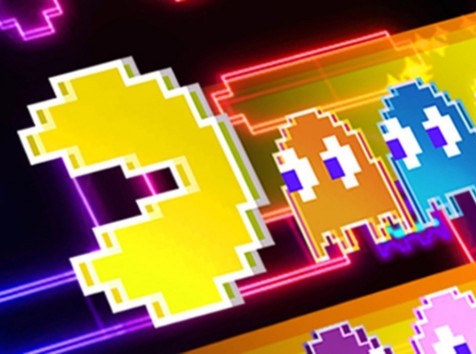 Related reading: Pac-Man 256 is another modern re-imaging of the classic game, available on mobile and console. Matt’s full review.

The first introduction to Pac-Man Championship Edition 2 is a tutorial that does an okay job at explaining some of the new features of the game. Pac-Man continues to whip around the play field, but he can now brake if he is catching up to ghosts, there are gauges that indicate when the next fruit or power pellet is coming up, and there are now boss battles. Thankfully the majority of these were pretty simple to pick up and do in the tutorial, knowing full well if I jumped straight into the game I could have been thrown out of whack.

I am assuming that if you are reading this then you probably have enough understanding on how Pac-Man works, so it hardly needs an explanation. What is different about the Championship Editions is that the majority of Pac-Dots (that’s what they are called) are removed, leaving only a specific trail or two for Pac-Man to follow. The more Pac-Dots eaten, the more the fruit or Power Pellet gauge gets filled. Once filled, a piece of fruit or Power Pellet gets dropped for Pac-Man’s consumption. The fruit provides additional points and a new maze to follow, while the Power Pellets allow Pac-Man to eat the ghosts who chase him throughout the maze. The more ghosts eaten in a single run, the more points given. 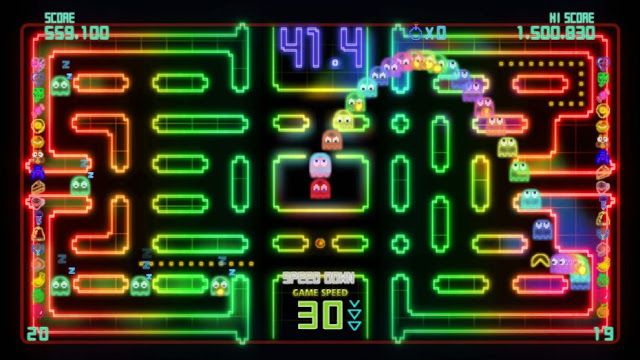 So like many score-based games, the key is memorising the mazes and how they work. If Pac-Man gobbles a fruit and advances a maze before eating all the Pac-Dots, he’ll lose points. Many mazes will show a recommended path by having Pac-Man simply follow the Pac-Dots, all the while barely scraping past ghosts which have been cleverly designed to increase the tension by having constant near-misses with Pac-Man. Some mazes are designed for Pac-Man to leave the path of Pac-Dots in order to nab a Power Pellet and gobble up dozens of ghosts at a time for a huge combo score. These moments where the ghosts speed around the screen randomly in an attempt to avoid being eaten can be frustrating when all Pac-Man is trying to do is get to the next maze to go for that higher score, but the special effects of Pac-Man downing all the ghosts in one go makes for a fun visual experience.

A nice addition to Pac-Man Championship Edition 2 is Pac-Man’s ability to bump into ghosts without being instantly killed. This time around the ghosts in the game act like a bit of a bumper, and if Pac-Man bumps them three times in a row, the ghost jumps high into the air and gets rather angry. This means the ghost in question is now much faster and more aggressive, and can now kill Pac-Man. There is an element of strategy with this as well, if Pac-Man finds himself cornered or there is a Power Pellet on the other side of the ghost, he can deliberately anger a ghost in order to get under while the ghost is in the air.

Of course all of this comes together in an addictive package that I haven’t been able to put down. Pac-Man Championship Edition 2 has definitely been designed as a game where achieving a personal best or climbing the online leader boards gives the player a feeling of accomplishment. It made me think deeper about why getting a high score is often all that is needed to keep someone playing, particularly because I thought I was past all that from my arcade days many years ago. I think the fact that my rankings on the global leader board were not too bad, and looking at all of the people I’ve beaten globally made me feel instantly better about myself. It’s gratification on a global scale where the game can make the player feel awesome about themselves without really offering all that much in the way of a reward. I’m not saying that Pac-Man Championship Edition 2 is the first to do it, but it’s definitely one of the first games making me want to gain higher scores in a long time. 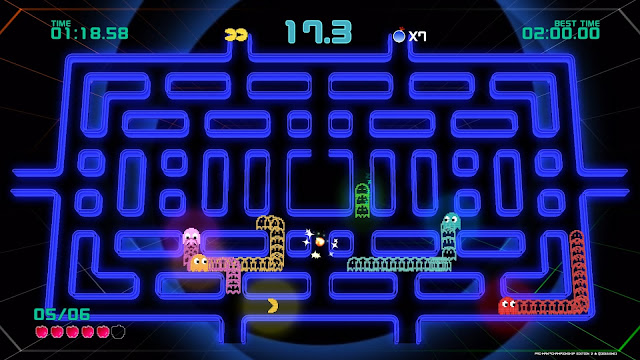 There are a lot of different modes to play too. The classic Score Attack mode makes a return (and would be a tragedy if it were missing, to be honest). There are also some minor gameplay tweaks within Score Attack such as ‘Jumping’ where the mazes are filled with trampolines that throw Pac-Man to other parts of the maze, and ‘Highway’ where the pace is frantic, and there are plenty of warp tunnels to zip in and out. There are 10 different modes within Score Attack alone, as well as an Adventure Mode. The Adventure Mode isn’t much to write home about, there are challenges to complete and some boss fights that aren’t that exciting.

Pac-Man Championship Edition 2 isn’t necessarily a bad game. The original and the DX versions were just about perfection, and you just can’t improve on perfection. It is simply a case that Bandai Namco needed to make it different enough to set it apart from the other Pac-Man games. On that count I have mixed feelings. The ultimate success story is that Bandai Namco can take Pac-Man as it is in its basic form and still find amazing new, and very modern, ways to apply that formula.