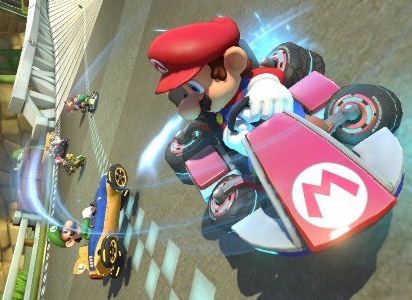 There we go. We finally know something about the Nintendo NX, now formally titled “Switch.” Not nearly enough, and I’ll get on to that in a moment, but we know something. Finally.

Related reading: A full run-down of the Switch trailer and news.

What we do know makes the Switch seem like a delight. A console that you play at home like normal, only to pull it off the TV and take it with you to play on the go like an iPad with buttons. It’s the Wii U’s Gamepad, if you could take the Gamepad with you overseas and still play your games on it. It’s a successor to the 3DS, because it’s Nintendo’s next generation of handheld, and it’s the successor to the Wii U as Nintendo’s next generation of home console. Finally, all your Nintendo goodness (aside from its new line of mobile games) will be on the one device.

The reveal trailer itself was only three minutes long and was more interested in showing people where they could play their Switch than its technical specifications or anything else to do with it. This would seem to be Nintendo’s attempt to position the device as a lifestyle product as much as anything else; something that would become a permanent part of your life, and that certainly gels well with the success that Nintendo has had with its DS line of handhelds.

There’s just one problem, and it’s a massive one. Nintendo still insists that the console will release in March 2017.

Given that we’re on the waning end of October, if Nintendo does release the Switch in March, we’re talking about a five-month marketing and sales cycle. To put this in perspective: we’ve known finalised details of the Nintendo NES Mini for a longer period of time.

Game developers and publishers announce their major projects 9, 12, 24 months from the release date for a very simple, but very important reason – it takes that long to sell the market on it. We’re not just talking about consumers, either. Consumers are relatively easy to please. No. A company’s sales and marketing teams need to work on getting retailers on board (making sure the staff are knowledgeable about the product, making sure enough inventory is being held). Another team needs to undertake the task of getting as many third parties on board as possible, and coming off the Wii U (and even the 3DS, where third-party support has dried right up), that’s an unenviable task even with a full year to work on it.

There’s a graphic floating around that trumpets how much third-party support Nintendo believes it’s already collected for the Switch. The numbers look good, as do the names. Bethesda’s Skyrim is right there in the promo video. Grasshopper Manufacture and From Software are on board. EA and Activision’s relationship with Nintendo appears to be thawing. Ubisoft’s already confirmed Just Dance, and Square Enix has already pledged Dragon Quest.

The problem is that the graphic is utterly meaningless because, one or two games aside, we know nothing about the long-term plans these companies have for the Switch. EA, Activision and Ubisoft all released games on the Wii U, but no one would claim that that console had the genuine support of any of the publishers. Most major developers and publishers took a crack at the Wii U, and when sales proved poor, they pulled support completely.

With five months until the Switch releases, no developer or publisher will be able to pledge anything but the most short-term support to the console. Bethesda’s got Skyrim up and working on the Switch, and who doesn’t want to play Elder Scrolls on the go (I know I’ve been waiting for an iPad port of Morrowind forever) – but what about Elder Scrolls VI? That new Quake? Dishonored 2? The games that would take more work to bring to the Switch are currently unannounced and unshown.

And what about Red Dead Redemption 2? Just an hour after the Switch was shown off, Rockstar had its own reveal. RDR 2 is almost certainly going to be the biggest game of whatever year it will release, and no Switch support. These are ominous signs of an industry playing “wait and see” because, of all console manufacturers, Nintendo has managed to have the most wildly inconsistent success with sales. It’s hard to shake the feeling that these publishers are only planning to throw genuine support behind the Switch once it proves itself to be more Wii than Wii U.

Of course, if there was longer before the Switch’s release, we’d all have a better idea of sales. Nintendo’s internal sales and marketing teams could point out pre-order numbers to EA as proof that, yes, that new Mass Effect does need to come to the Switch as well. But that information won’t be available and the launch of the console may well suffer as a result in terms of software support for it. And that would, of course, send the Switch into the same destructive cycle that the Wii U suffered.

I don’t think we can count on independent support, either. Many of Nintendo’s most loyal (and successful) independent developers saw the Switch for the first time at the same time we all did. In fact, the complete absence of leaks regarding the Switch would suggest that Nintendo was incredibly protective in letting indies know anything about it. So, even if they’re now hurrying to go through the accreditation process, you can forget about there being many indie games on the Switch at launch.

This brings us back to Nintendo relying on its own software to sell the console at launch. There’s every chance that there will be quite a lot of it. We know that Nintendo has been outsourcing the development work on its games for both Wii U and 3DS like crazy so that it can dedicate its internal teams to work on launch content. The console will launch with a new Zelda title, which is a major win, and we saw everything from Mario Kart to Splatoon in that demo video (though how Splatoon will work as a single player game when you’re not at home with an Internet connection is anyone’s guess). Nintendo’s games are, without a doubt, critical to the success of a Nintendo console. But this is almost exactly the situation that Nintendo found itself in with the Wii U. Sadly (and it is sad, as I firmly believe that everyone should play Nintendo’s games), Nintendo isn’t enough to sell Nintendo by itself any longer.

The Switch’s release date needs to be pushed back to November 2017. Nintendo really does need to give itself a year to properly on-board third parties and get its B2B, industry sales and marketing ducks into a line. I would hate for a hasted release to affect the fortunes of a console that looks like a genuine joy to play.