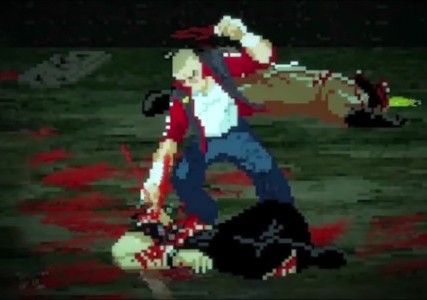 Like how G.K. Chesterton once said of R.L. Stevenson, “he seemed to pick the right word up on the point of his pen, like a man playing spillikins”, I too can say precisely the same of Devolver Digital. Except the only difference would be replacing the word “word” with “games”. Ever since publishing the hugely popular Hotline Miami back in 2012, Devolver Digital have become sort of an overlord of the punk grindhouse indie scene, with practically every game published becoming attitude-heavy darlings of the arthouse scene. Just like the esteemed author’s inclination, this game company just seems to make all the right moves… and its latest offering, Mother Russia Bleeds, only continues that trend.

Developed by promising new French indie company, Le Cartel Studio, Mother Russia Bleeds is a 2D beat ’em up molded in the everlasting appeal of vintage violence. With the splash screen greeting you with a brutal, heavily-distressed logo of the game and loud, drone music in the background, you just know this game is going to beat the everloving heck out of you, with steel-studded boots. And the fact that it gives you the option to play in CRT mode only proves my point further. Mother Russia Bleeds might not be the most vicious dog Devolver Digital has bought to the arena, but it ain’t no slouch either, and if you’re not too careful with it you’d think a fight with Wolverine was a thanksgiving present.

Very much like the side-scrolling arcade beat ’em ups of the 80’s and 90’s – namely Streets of Rage – this game allows you to pick one from several characters and engage in one very trippy, chaotic, and violent world the likes of which this genre has not seen very often. Because it’s a retro-fitted game it uses pixel art, and oh wow, tie me up a pole and put flairs in my hair, the pixel art is nothing short of devastatingly gorgeous. Pixel art will never go out of fashion, not as long as games like Mother Russia Bleeds are around to deliver jaw-droppingly awesome pieces of work. Even on the grainy, noisy CRT mode, the staggering amount of detail in each and every little object and character is beyond belief. Even though more than a good dozen indie games out there use pixel art to exceptional, even beautiful, levels, but Mother Russia Bleeds is a violent game with surreal, hallucegenic qualities and sick animations; thus the pixel art needs to be more than just art, it needs to be a well-crafted masterpiece. 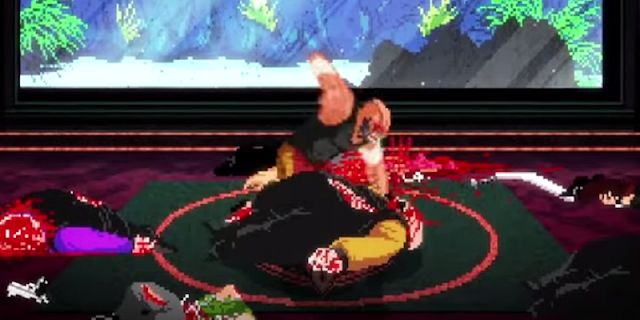 The gameplay is compared to that of Streets of Rage, though it’s more fair to say Mother Russia Bleeds is the legit offspring of NARC and Splatterhouse 3. Set in an alternate U.S.S.R, the plot is basic and wacky enough: the rogue government of Russia has captured a couple of street fighters and has them imprisoned, subjecting them to illicit drug-testing experiments. You get the option to choose from one of four characters, though everyone knows Boris is the best. In case you’re not convinced, his ‘taunt’ is defecating on his hand and hurling it across the screen. Anyway, it turns out your fighter of choice has become addicted to a green serum called Nekro, and in order to survive they must repeatedly inject themselves. This is a pretty cool mechanic, and because it drains out pretty quickly you’ll have to learn to strategically inject and harness from twitching, convulsing enemies. This adds a nice layer of intensity when large hordes of enemies are present and especially during boss battles. Speaking of which, boss battles technically last under a minute, but because the challenging factor is cranked all the way up to 11, be prepared to repeat those 60 seconds over and over again as you’ll be dying a hella lotta lot!

The combat is intuitive and relatively simple to learn. You have your basic punches and kicks – though surprisingly punches are way over-powered in relation to the kicks (usually it’s the other way around.) You can even combine combos to dish out serious damage – however, that system is slightly broken and doesn’t work all the time. If you hold down the punch button long enough you get the power-punch ability which sends enemies careering across the screen; and if there are other enemies in the vicinity they get swept off too.

The soundtrack is perhaps the game’s breakout star. Bonafide perfection is how I would describe it. To put it concisely: if you’re a major fan of noise (or drone) music like I am, then this OST is the stuff of your barb-wired, boot-strappin’ nightmares. Loudness aside, the tracks are definitely tinged in dark-noir flavor, clearly modeled after the more moodier and aggressive compositions the likes of Gost, DROKK, Perturbator, Lazerhawk, and MOON. Take this seriously: Mother Russia Bleeds’ OST is a throbbing, pulsating cacophony of eardrum-bursting, nosebleed-inducing tunes that will send your head spinning in parallel directions as though several bullets just whizzed by your ears. If the more loud tracks of Hotline Miami (namely Silver Lights) captured your fervor, then you’ll be right at home here. 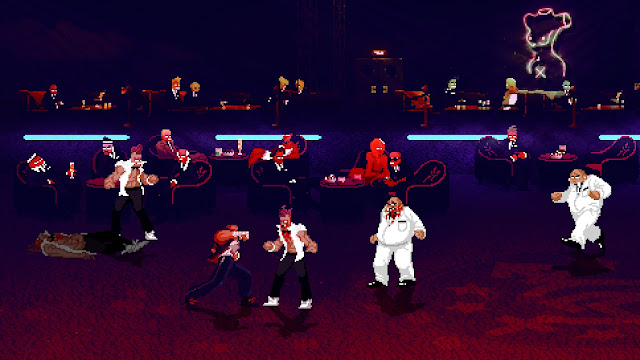 In conclusion, Mother Russia Bleeds is a solid debut for Le Cartel Studio. The production is top-notch and the soundtrack is arguably one of this year’s absolute finest. It’s crystal clear from the onset that the game was born to be wild. It’s the culmination of walls gone soft after repeated exposure to drone music and the countless hours spent playing arcade classics. It’s a heavy metal game for the most hardcore, and while there’s more style than substance to a lot of it, I doubt the fans of that style are going to care in the slightest.