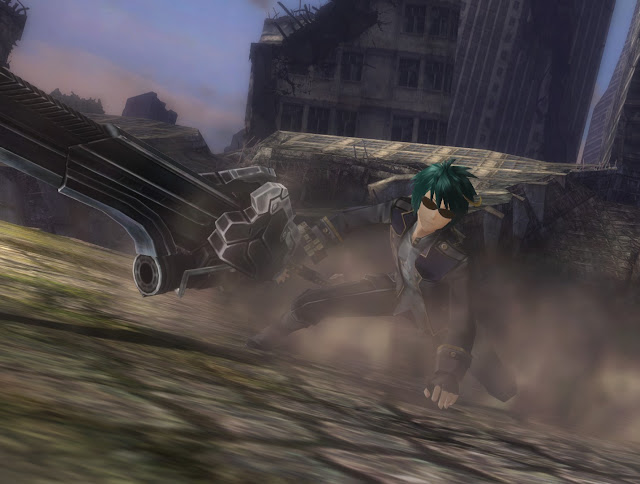 God Eater 2: Rage Burst puts you, the player, into the role of a self-created protagonist that is one of several newer members to the organisation known as Fenrir. Your task is to venture outside of the protective environments to hunt down large beasts, either solo or with other heroes, much like how you do in the Monster Hunter and Toukiden series. What separates God Eater from the other two isn’t the mechanic approach to the experience, but the narrative one. Toukiden did have some narrative but it was more of a background. God Eater 2 has a far more active and chatty narrative, giving players a greater sense of context and character in the process.

Mechanically God Eater does offer a different experience from the others in the genre. Typically with other ‘Monster Hunter-like’ games characters are offered the choice of a single weapon and then go about picking up the pieces in order to build and customize their armour sets. God Eater, on the other hand, has characters separately choosing both a Melee and Ranged weapon before selecting one of three different shield types for defensive measures before setting out into the fields. This was refreshing as it allows for an easier adaptation to a change in scenario without that frustration of “maybe I should have grabbed a different equipment set before heading out of the gate”.

Creating new weapons didn’t feel like an absolute grindfest from the very beginning, either. Even the starting weapons felt useful, giving players a more accessible entry before starting to ramp up the difficulty – a nice change from Monster Hunter, especially, which can be very inaccessible indeed. Before needing to even worry about doing this however, there is the possibility of adding extra skills collected out on the field from “dead” weapons left over from other God Eaters. 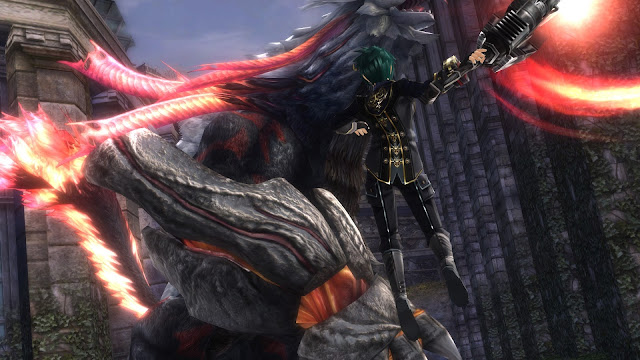 The skills add an extra element to the weapons systems as these can really aid in a person’s personal play style. Up to three separate skills can be added which affect various effects from extra attack power to better support for healing skills. Taking this element one step further is the ability to recycle skills if they aren’t currently or at all useful to your play style. By taking three skills that you do not wish to keep a new, and random, skill can be created. It can be a bit of a gamble at times but if that new skill doesn’t work out, it just means that it goes back into the system with another two in order to hopefully get something better out of it.

Being out in the field is where the bulk of your time will be spent. Missions will range from thirty or forty-five seconds to five, ten, fifteen plus minutes as monsters become tougher to take down. Through the use of your character you will get the chance to run through a variety of different three dimensional fields with obstacles that can either be bypassed by jumping over or by heading around while hunting after these beasts. Ultimately this is a Monster Hunter-like game, though, and while it might be more accessible, going in poorly prepared can mean a swift defeat. Monsters don’t hold their punches, and you’ll soon get yourself into a good rhythm with the items and approach to each battle you take on… or you’ll find yourself failing over and over again.

Once out in the field knowing how to switch between your melee and ranged weapons will be crucial as while dodging can be performed as needed, shielding yourself from enemy attack can only be done while in melee. Switching between each is easy enough but there will be some trial and error in order to get the proper timings down. Light shields come up rather instantly but don’t protect from the heavier hitters on the field. Medium and heavy take longer in order to deploy but offer more resistance if they can be raised in time. Evaluating the fields and the equipment that suits your protagonist could take a few missions in order to try it all out but it is indeed worth the effort. More than anything else, there’s no “right” approach to the combat in God Eater, and each player will have their own effective strategies. 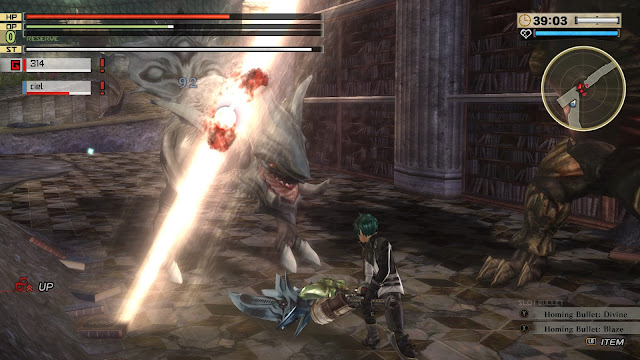 There are a few little issues here and there but they come from the style more than they come from the actual gameplay. A God Eater’s weapon is a living creature that can feed. Performing this action can bring a character closer to their Rage mode and is as simple as running up and forcing your weapon to unhinge its jaws to attack and bite down. Once that’s done however the screen if filled with blood, obscuring your view and giving you a couple of seconds to worry about whether something is making a meal of your character while you’re effectively out of action. Following this, while there is a lock-on function it doesn’t automatically track the enemy as it moves around, making it more useful for firing from afar than for swinging while up close.

Related reading: God Eater’s biggest competition as a rival to Monster Hunter is Toukiden. Matt’s review of Toukiden Kiwami on the PlayStation 4.

God Eater 2: Rage Burst is a great mission based action experience. It’s the added narrative and characterisation that makes it more than just another Monster Hunter-like grindfest for better equipment to take on bigger monsters with. They even provide sunglasses, so you get to look cool while doing it all.