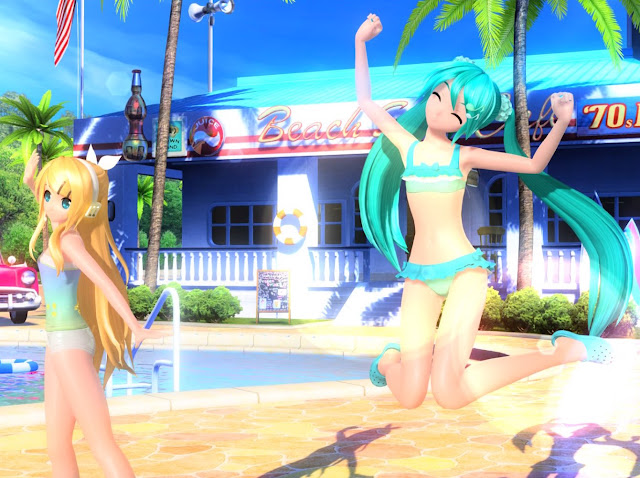 My favourite game of all time is about to get even better. On the 15th of this month, SEGA is releasing a DLC pack for Hatsune Miku: Future Tone.

Related reading: Matt’s 4,500-word review of Future Tone. No, that word count is not a typo.

If you haven’t played this game yet, do so. It’s Japan-only, but the PlayStation 4 is region free and it’s available on the Japanese PSN. After going through that slight extra effort to acquire the game, you get 220 music tracks of rhythm gaming heaven, pulled directly from the amazing arcade game.

The four songs being added to the beyond incredible lineup are:

Sharp-eyed readers might notice that these are all tracks from the Nintendo 3DS’s Hatsune Miku: Project Mirai. They are all superb, and it is especially interesting to see, with Cendrillon and Adolescence, how the track itself can be changes simply by changing out Miku and KAITO’s voices for Rin and Len’s

As for the costumes, most notably of those MIKU’S EMERALD CHINESE CHEONGSAM IS FINALLY COMING TO FUTURE TONE.

You know I get terrible scores on this track and I dunno why. #PS4sharehttps://t.co/6EgUIOjahn pic.twitter.com/PTkaV9y32Z

This is my favourite Miku costume of all. It’s sexy, it’s stylish, it’s leggy and classy. The only disappointment I had with the original Future Tone was that this costume, which is legitimately one of Miku’s classics, was not in the wardrobe. That issue is now fixed.

Of course I won’t be able to grab these before I get back from Japan, but now I know the first thing I’m doing when I arrive back in Australia.