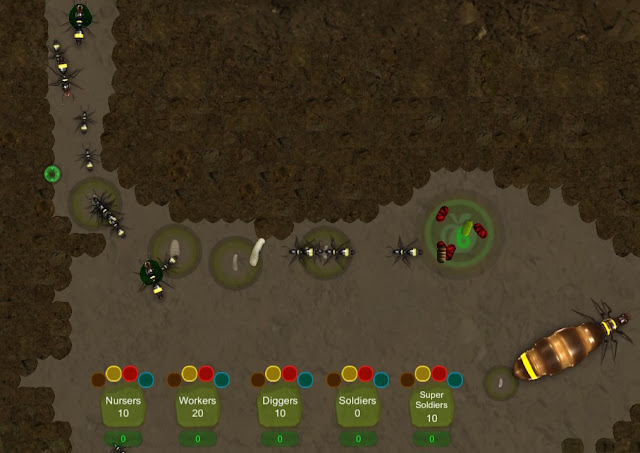 A long time ago I rented SimAnt by Maxis on the Super Nintendo, and fell in love with it. I loved it so much that I begged my mom to buy me the PC version of the game, and she held out for a long time indeed. But I won in the end. I had to have some teeth pulled for some reason or another and she said she would buy it for me if I went without a problem. I won. I got the game and spent many hours playing it. Fast forward to today, and when I saw Ant Queen, and it looked so much like that beloved game, I just had to try it out.

In Ant Queen’s story mode, you will play through 19 levels starting as the queen ant who needs to travel to a safe spot and found a new colony all while evading other bugs that can kill her. It’s a poor start to the game, which controls that are not always functional; I would click where I wanted my queen to go but this would sometimes fail, and she would get hung up on things. Luckily this was only the first level. Once you get the queen to her new colony things improve, as you get stuck into the strategy side of the game and the queen’s job is to produce ants.

The first ant you will get to make is a nurser ant who will take care of the larvae and feed the queen. The next are worker ants who collect food and bring it back to the colony. Then there are the diggers who, like the name suggests, act as engineers. For military purposes, there are soldier ants who will help protect the colony. And lastly, we have the super soldier ants who do the same as soldiers but are much stronger. Unsurprisingly you slowly learn how to use each ant, and won’t have access to all of them until deep into the game. 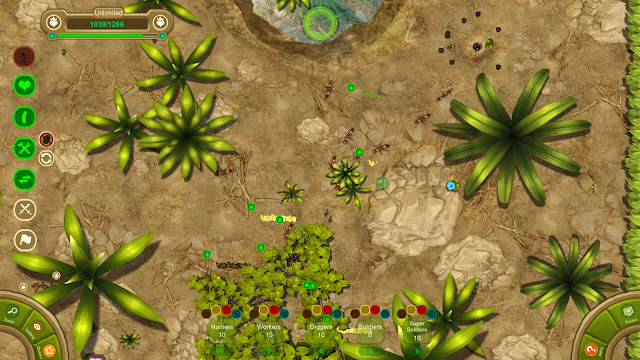 The queen has her own health that will deplete after each larva and each type of ant takes more of her health away. To regain the health the nurser ants must feed her. The queen’s health will increase as the colony grows from your digger ants. In story mode, you can’t tell your digger ants where to dig, though. The queen will also slowly lose health over time from simple starvation. Throwing in additional challenge is the other bugs that will appear from time to time, and the entire colony will drop everything to try and defeat them. This chews up valuable time that could be spent otherwise building up the colony.

In a level, there is limited food and to get more you must use your ants to kill other bugs, from caterpillars to spiders. The other bugs can also kill your ants now… and you are playing a game with ants. You’re not exactly at the top of the food chain. And you’ll need to do this on the clock, too. One thing I noticed is that if a level takes longer than the game thinks it takes to in order to complete it, the bugs will stop coming, meaning no food to feed the queen and a slow decline to the colony.

As you progress through story mode you will unlock new coloured ants. They are the same as your other ants but have slightly different stats. The yellow version of ants are faster but have lower health and the red versions are stronger but are slower and so on. For a light strategy game, which is what this ultimately is, there’s more than enough variety in units to build and approaches to take to a level to keep your mind keen. 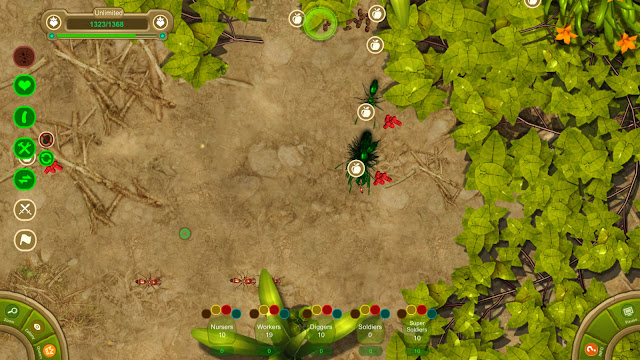 There is one more mode besides story mode. Endless mode is a sandbox mode that will randomly generate a map and then lets you get on with it. Once you start your colony you must survive as long as you can. In this mode, all ants are unlocked and you can make them at any time as long as the queen has enough health to “afford” them. There are three difficulty settings for this mode from easy to hard so it’s a good mode for just about anyone, and, freed of the constraints of the story mode, trying to beat your best scores will likely give you the most longevity of all through the game.

Ant Queen isn’t a perfect game but it is fun to play for a few hours now and again. The developers also seem very eager to make this game better and are always listening to what fans request. It’s perhaps not the spiritual sequel to SimAnt that I was quite hoping for, but as a casual strategy game it’s a solid, charming, time-waster.

Libra of the Vampire Princess gets an English release, collector’s edition