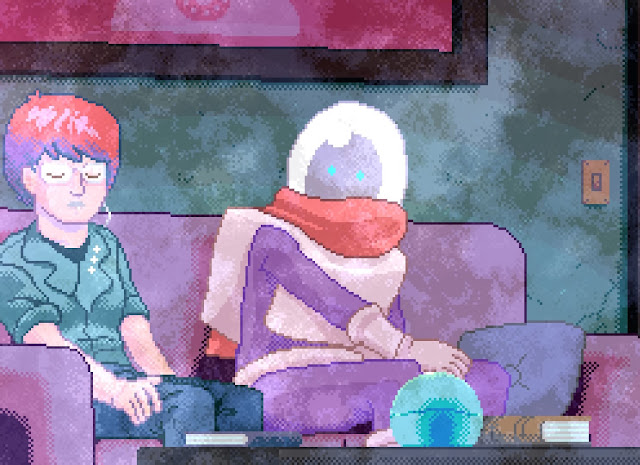 Not long after firing up Alone With You for the first time, I tweeted a screenshot with the caption: “Wow, No Man’s Sky looks nothing like those trailers.” At the time, it was a mostly thoughtless remark; a reaction to the No Man’s Sky “downgrade” hysteria and a simple observation of the games’ similar aesthetic direction, despite very different art styles. As it turns out, it was a rather portentous tweet, because Alone With You has a lot in common with Hello Games’ work – namely, themes of loneliness and existentialism – even if it comes at them from a very different perspective.

In Alone With You, you play as the sole survivor of a planetary colonisation program gone horribly wrong. Well, “sole survivor” may not be entirely accurate, as you’re accompanied by the colony’s benevolent AI overseer and holographic simulations of now-dead colonists who have taken on lives of their own despite not being “real” in a physical sense.

On the one hand, this makes for a creative, if inelegant framing device: in your efforts to figure out what happened and how to escape the doomed planet, the AI is a constant source of heavy-handed exposition and odd little facts about the colony. The holograms offer unique insights into the workings of the various facilities and the settlers within. Together, they patch together an image of what happened and your best chance of a successful escape. 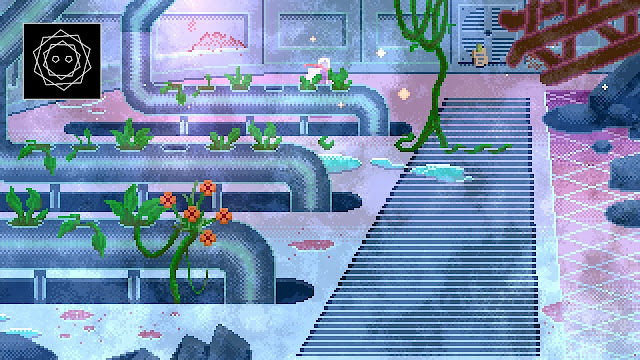 On the other hand, these computerised companions throw into question the very nature of existence. Can an artificial intelligence that has no physical form but is sentient, sapient, and self-aware be described as being alive? What about holographic projections that are similarly self-aware and are born of the memories of people who were, at one time, physically alive?

There’s no shortage of science fiction asking such questions, but Alone With You is one of the best I’ve experienced, and the adventure game framework is a big part of that. Much of the game is spent talking to your companions, with relatively simple branching dialogues allowing you to get to know them and impart your own personality on an otherwise blank protagonist. It’s these parts, when it’s not being bogged down in exposition and sci-fi minutiae, that Alone With You’s writing really shines. It gives you a chance to really get to know these individuals, which makes the question of their existence incredibly pertinent when you have to make decisions that might affect their livelihood – and indeed, your own.

That existential dilemma also ties into the loneliness at the heart of Alone With You, because despite your digitised friendships, you’re very much alone in a hostile alien wasteland. The bulk of the game involves travelling to different facilities within the colony, scrounging for scraps in the hopes of getting the escape rocket up and functioning. If you were feeling truly reductive, you could describe Alone With You as a “digging through trash simulator”, because that’s largely what you’re doing. However, it’s through this process of exploration that an image of the world is built around you (again, helpfully overexplained by the AI), and its through the mundanity of your daily tasks that the crushing weight of your isolation is allowed to seep in. 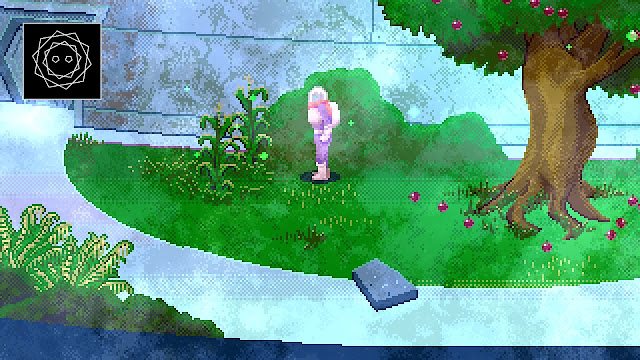 “Today you’re heading to the communication towers to find something the boost the escape rocket’s signals,” the AI tells you, and so off you go to dig through the wreckage of the communication towers. “Today you’re going to the agro-dome in search of food.” In structure, Alone With You is all about the daily grind of survival when you’re the last person alive, and even with the companionship of a self-aware computer, there’s a haunting loneliness in that. It reminded me of The Last Man on Earth (1964), the first film adaptation of I Am Legend, and its opening line: “Another day to live through. Well, guess I better get started.”

That’s not to say that actually playing Alone With You is boring or mundane, because it really isn’t. Each day of the game only takes around 10 or 20 minutes, and there’s plenty to see and find within each facility. There are simple puzzles to solve, and thankfully none of the moon logic that so often plagues games like this. The sheer beauty of its pastel-coloured pixel art means that the game is always a joy to look at, and occasionally breathtaking. The soundtrack, composed by Ivor Stines, gravitates effortlessly between exciting, melancholy, and haunting, just as the mood of each scene dictates.

No, the mundanity is kept to a thematic level, and that’s what makes Alone With You as a whole so impactful. It’s a game about loneliness, love, and what it means to be human, and that’s a beautiful thing.