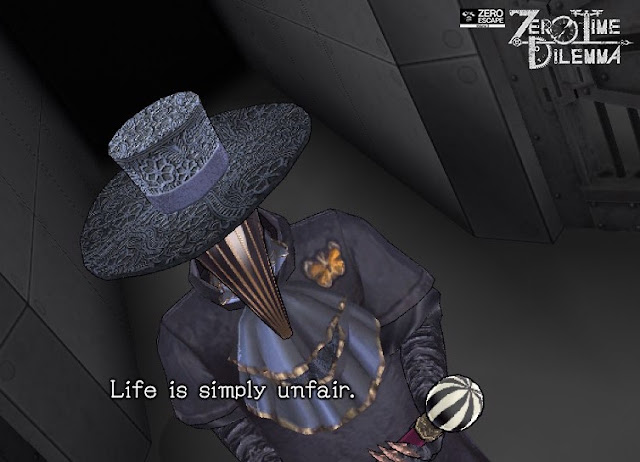 It feels surreal to be writing about Zero Time Dilemma, the third entry in the Zero Escape series. In 2014, Kotaro Uchikoshi, the director, said that the end of the trilogy might not happen. This really saddened me and all the Zero Escape fans out there because no other game hooks you into the narrative like a Zero Escape game. I love the Danganronpa games but for pure narrative, Zero Escape takes the crown. Fast forward to today and we are in a timeline where Zero Escape: Zero Time Dilemma not only exists but is a worthy conclusion.

Related reading: Danganronpa is, in philosophical terms, brother to Zero Escape. Matt’s full review of the first game in that series.

Zero Time Dilemma can be played without prior knowledge of 9 Hours 9 Doors 9 Persons and Virtue’s Last Reward, but I recommend you play them before. There are a lot of story segments that will leave you completely confused or have much less of an impact without the knowledge of what went on in those predecessors.

When I first played 999 on DS, I was reminded of the Saw movies – not in terms of the gore, but certainly the mood and narrative of the game was very similar to that pioneering horror film. Zero Escape games all follow a similar pattern: characters, imprisoned and split into teams, need to sort through puzzles and escape sticky situations (i.e. ‘the Decision Game’) while trying to figure out what is really at play, and, ultimately, how to survive (and escape). 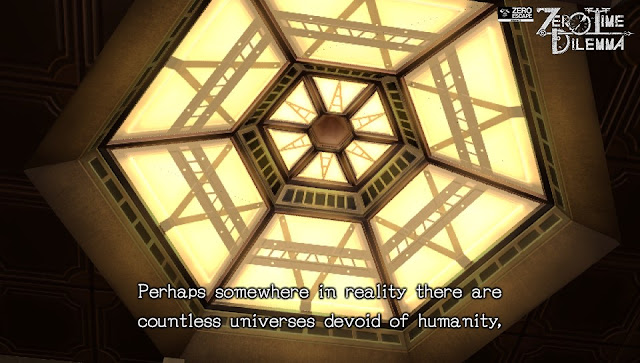 No time is wasted in this latest title, as you find nine people trapped in a bunker playing The Decision game. The game plays out like a twistied puppet play, where the puppetmaster is a man who calls himself Zero, and comes complete with creepy modulated voice. One thing you need to remember in a Zero Escape game is nothing is what it seems. What you see or think is happening is most certainly not exactly as it is.

The game is structured in an interesting manner that really works to maintain the sense of mystery throughout. You play through various ‘fragments’ of stories, making decisions in any order of your choice. More fragments unlock as you progress, revealing more details. While this may seem disjointed at first, it all makes sense after spending some time with the system, as it has allowed the game developer to carefully control the narrative experience in such a way that you’re provided only the information that you need to at a given time. It’s tight and focused storytelling.

I’m not a fan of the RNG system, or the randomness in has introduced into the game for the first time in the series, however. In various situations you will need to replay things multiple times to get various outcomes. I found this to be a waste of time because it feels implemented cheaply and wastes time. When you have a flowchart showing you a fixed number of outcomes, there’s no point wasting the player’s time with randomness. 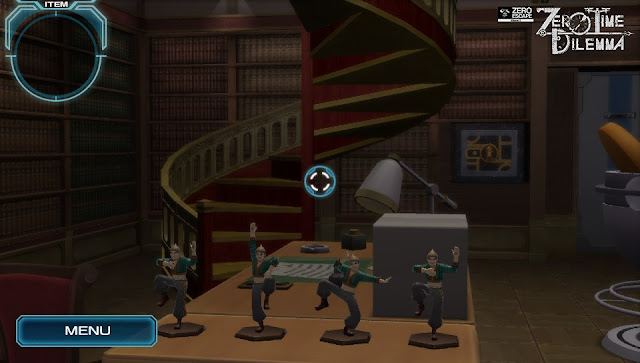 The central narrative motif of the game is the Prisoner’s Dilemma, a useful philosophical mind puzzle that helps us understand human morality – it’s the same thing that drives the aforementioned Saw films, as well as Spike Chunsoft’s other narrative-heavy adventure series, Danganronpa (there’s a useful video overview of this topic here). Here, there are many situations here where pushing a button could mean freedom but at the cost of an acid shower on other people. Not pushing the button might be good for everyone, but can you trust the other teams with the same? When you can’t communicate with them to come to a joint consensus?

I really like how Uchikoshi-san and the rest of the team present this in narrative form. There’s also the Monty Hall problem that comes up in Zero Time Dilemma as you need to open one locker out of a set of ten and only one of them has an oxygen mask. If you pick locker X and all the others barring locker X and another one (let’s call this Y) are opened without any success, will you change your choice to X or to Y? There’s a probability game to all of this (and Game Theory, which the Prisoner’s Dilemma is an application of, is an economic principle, and so heavily rooted in mathematics), and it’s so compelling precisely because it’s such an intense way of testing your appetite for risk… and your willingness to make sacrifices at the expense of others to futher personal goals.

Across the more explicit story, Zero Escape is quite dark, with plenty of twisted thoughts and emotions driving the characters to do unexpected things. There are also moments of proper closure for characters you care about that are great to finally have. I feel like in the intention of this, some other characters didn’t get enough of a fleshed out narrative or a focus and felt rather unneeded in the grand scheme of things. The final true ending on the other hand will be discussed for a long time among Zero Escape fans or maybe there will be a Snail on the road (if that doesn’t make sense to you, you haven’t spend long enough playing the series yet, so you know what to do). 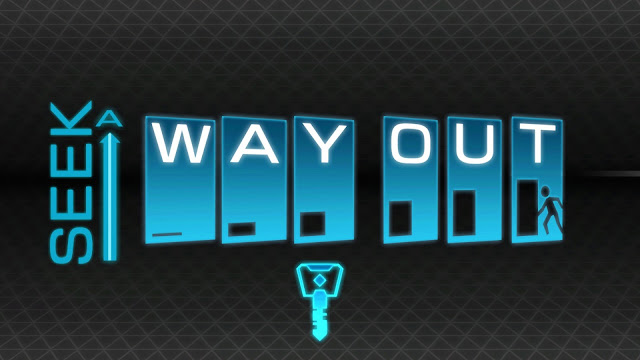 The elephant in the room and my biggest complaint with Zero Time Dilemma is the art direction. A game like Danganronpa was able to use simple art direction enormously effectively by being clean and distinctive. Here, though, Zero Time Dilemma has ambitions that far exceeded budget. Hair bounces around while characters bend, and characters move like robots from the 80s on television. If you’re going to do full 3D engines and character models, then you need to be prepared to invest in their design. Otherwise, you might as well stick to the more static visual novel approach, that will help players focus on the narrative.

Zero Escape: Zero Time Dilemma is a game everyone absolutely must play. If you haven’t played the previous games in the series, drop everything and experience them. Even though the artistic direction is a misfire, ultimately you’re looking to a game like this for the narrative, and it absolutley delivers something intelligent and meaningful there.

We should care about censorship, even if we don’t care about the censored work