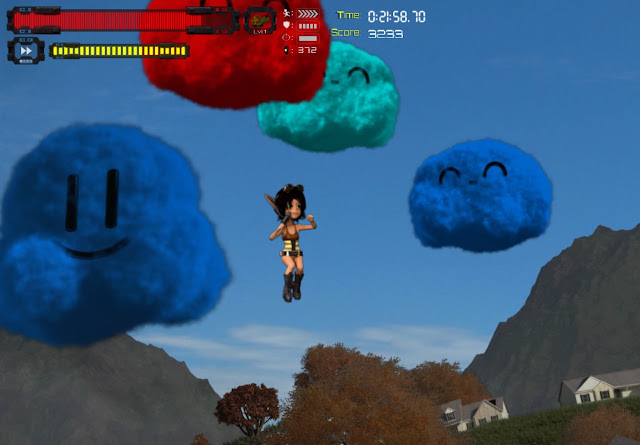 I think it was about the time I hit the giant bunny that shot lasers out of its eyes, standing on a background that looked like a really messed up kid’s Yoshi game fan art. I think that was about the time that I came to the stunning realisation that Daydreamer: Awakened Edition is absolutely freaking brilliant.

I know, I know, you’re wondering what the hell is an anti-game right now. Well, here we go, folks. Time for a brief art history lesson for you!

In Daydreamer’s promotional material, it was billed as “a surreal adventure.” It’s not. Calling it “surreal” is doing it a deep disservice. Daydreamer has far more in common with the Dadaist movement, and Dada makes surreal look like the most boring painting of trees and a river that you can possibly imagine.

Dadaists were the actual lunatic left. Not just the people that are somewhat progressive and get yelled at on Twitter for being “SJWs,” oh no. Those are amateurs. Dadaists were revolutionary, completely anti-war, anti-establishment, Che Guevera-in-art-form types. You’ve probably seen the work of Dadaists in one form or another, even if you weren’t aware of the movement it came from. Duchamp’s Fountain – that public urinal that ended up being called a sculpture – was the work of a Dadaist. My hero, Antonin Artaud, who wrote the most insanely beautiful (and actually impossible to perform) play, Jet Of Blood, technically identified with the surrealist movement, but his work clearly fit with the Dadaist mold too.

This was the art movement that mellowed into surrealism, and before Dada existed as a term, this movement of art in its early stages was coined ‘anti-art’. Anti-art artists worked to deconstruct – nay, destroy – the very foundational assumptions of what art was, and pull at the fabric of those assumptions to truly understand the meaning and value of art. It’s paradoxical that anti-art, in questioning the very foundations of art, becomes art, but then we’re dealing with some odd, fringe, art movements indeed here.

No seriously WHAT THE FUCK IS THIS. #PS4share https://t.co/MC5lA83rmF pic.twitter.com/DnRpWu2R0b

Though it no longer exists as a distinct movement now (there isn’t much money in making stuff that no one would ever want to actually buy, even if they appreciated it), Dadaism has been hugely influential in fringe art movements. Surrealism, as mentioned, wouldn’t exist if it wasn’t for the Dadaists, and effectively any overtly transgressive art work owes a little something to the Dada movement. For it was the Dadaists that perfected the process of making art that would offend sense and sensibility to make a point of the art.

And I’m referencing that artistic movement and tradition when I say that Daydreamer is an “anti-game.” This is a game that absolutely poops over just about every rule in the rulebook in coming up with something that makes sense in failing to make any sense at all. I’m not even sure my comment about ‘poop’ in there isn’t literal – there’s a lot of brown in this game, and it looks like there’s been claymation thrown in here and there…

This is a game where common enemies include weird brown slug things that move around in little kid’s trolley carts. Because they can. Immediately after that enemy you’ll run into robot things and UFOs that exist because they can, and on this backdrop, right before the aforementioned giant rabbit, are the aforementioned clouds that look like the happy smiling ones from the Yoshi game, only now ugly. Clearly, blatantly, distinctly, brutally, deliberately ugly. The camera janks about the place , the colours clash with complete distain for basic rules of aesthetics, and all of this to one of the most discordantly twee music tracks I’ve ever heard. It’s like something that Jefferson Airplane wrote when being on a particularly potent trip (by their standards) and then discarded it for being too weird (for them).

And that’s just one level. Daydreamer is structured a little like Mega Man games, where each area has its own theming and so on. They don’t get any less completely effed up. This is not a game that I was able to play for too long at a time, because the intentionally horrid aesthetics had the (potentially deliberate) effect of making me feel ill after longer sessions, but it was certainly a sensory overload and, in an utterly discordant sense, quite ravishing.

Now, you didn’t expect that this would play well, right? Because it doesn’t. Even forgiving the fact that small enemies are really freaking difficult to hit because of the clunky aiming system, and even ignoring that boss battles are ridiculously difficult because there’s very little projection of attacks or feedback that helps you get into the rhythm of battling them. Even if you ignore all of that, there’s the flash-like animation of your main hero to contend with, which makes some of the more precise jumps and movements the game likes to throw in from time to time about as frustrating as playing a B-grade platformer from the SNES era. Which is to say “very frustrating indeed.”

It sounds like I’m ripping into the game, doesn’t it? Well, here’s the thing. As with most Dadaist art works, the experience of Daydreamer is so intense that I develop something of a Stockholm’s Syndrome relationship with it. Which is to say I want to take it to bed as badly as I do D.Va… okay I didn’t say that. The point is that Daydreamer, beneath its utter insanity, actually has a point.

This is a game that, in completely throwing away the rulebook, acts to remind us of what that book exists for. Daydreamer is intensely meta in form and function, showing how arbitrary enemies, puzzles and level design are. It highlights how fundamentally ridiculous boss battles are. How aesthetics and music comes together to set a scene. Daydreamer makes a point of isolating each component element that we find within a game, and then demands that we pay attention to it. There’s not a moment of Daydreamer that I don’t vividly remember, and in breaking down what makes a game so completely, the developer has created a conversation in how games are constructed, and why they are in the way that they are.

I’m not going to pretend that Daydreamer is a good game, because it isn’t. But then it’s also quite brilliant in its feverish commitment to tearing at the fabric of game design. I had a great time playing this, because it completely transcends the “so bad it’s good adage” to be a creative entity that is in a league so completely of its own that it almost feels unfair to give it a score at all.

But in the spirit of the Dadaists I’m going to give this game a score that will cause the most chaos. More seriously, I am going to be pointing to this as an example of a genuinely transgressive game for some time to come, so as far as I’m concerned it’s essential.