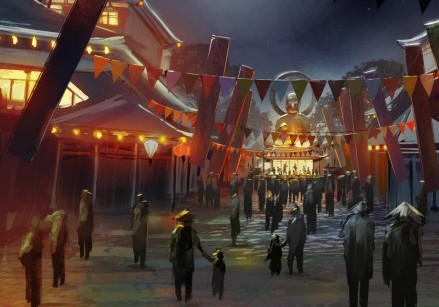 Here’s a bit of news we missed when it was first unveiled, but caught up on at E3. Daedalic Entertainment announced Shadow Tactics: Blades of the Shogun in March this year. This is a game with some serious potential; it’s a tactical strategy game coming to both PC and console that seems to have a very heavy emphasis on both stealth and deception.

Naturally, as you might expect from the title, this game is set during feudal Japan, where political tension was rife, and samurai, geisha and ninjas walked the street. The game’s engine, even in this early state, is gorgeous, showing off environments that are distinctly Japanese in tone:

At E3 Daedalia was back with a more in-depth look at the game and specifics about the gameplay. In each mission, you’ll be controlling up to five different assassins in the employ of the shogun, and your job will be to take out political opponents and the like. Each assassin has different abilities, and remaining hidden at all times is absolutely critical to success. The game also runs in real time.

So it’s not a “tactics” game like Final Fantasy Tactics is, but rather a tactical take on stuff like Assassin’s Creed. Stealth games are quite common these days, but this one does look like it has some unique tricks to bring to the party.

It’s going to be interesting to see how this can work on console, though. It looks a little too fiddly to allow for a straight conversion of mouse pointer to controller cursor, especially when it’s in real time and, one assumes, there will be moments where timing is critical. But fingers crossed for it nonetheless, because I am always up for games like this.

Ever Oasis is a surprise delight from Nintendo at E3