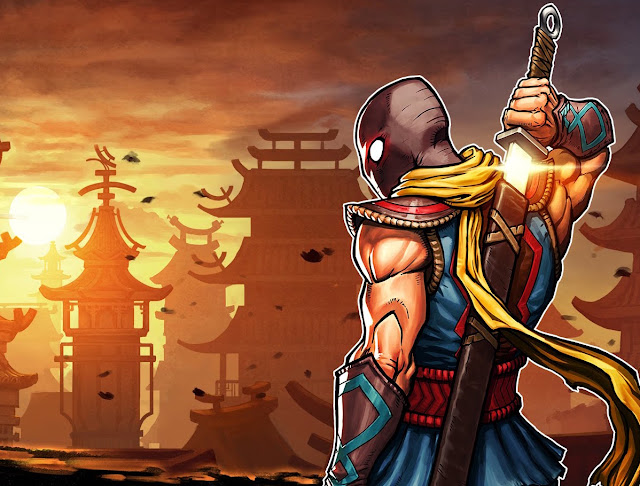 Shadow Blade: Reload is the PlayStation 4 version of Dead Mage’s Shadow Blade which has already slashed its way across the iOS, Android, and PC platforms. Starting off as what seemed to be just another fast paced ninja platformer, Shadow Blade offers something a bit different in mixing in elements of both classic feudal Japanese architecture and cyberpunk. Is it shallow? A little, sure, but levels only get more interesting as technology is thrown into the mix.

Taking control of the ninja, Kuro, gameplay is very fast and responsive if crazily over the top, making it quite fun at times. Kuro is one agile fellow, and stages are all designed around his ability to double jump and bounce off walls. There’s combat, too, though you’ll enjoy this game more if you remain stealthy; if enemies weren’t sure of your presence then there’s no need to even fight, and then you’ll feel like a real ninja.

Sometimes, though, Kuro will need to get his blade dirty. More than simply a master of acrobatics, Kuro is rather well versed in the art of combat. It’s quite lethal, with one-hit-kills for both Kuro and his enemies combat making sure those battles are just as fast paced as the platforming, and because it’s always over quickly there’s never a time where it becomes frustrating. There are some enemies that will put up a resistance but making it through them is a simple matter of learning their weakness or, if it proves too irritating, simply running by them. If he is hit by enemy weapons to traps, Kuro will use a smoke bomb in order to return to the last checkpoint, and they’re never too far behind either.


There are two ways in order to launch through the stages with Kuro. The first is to simply run through and get to the end. The second is, while still moving quickly, to move efficiently while picking up each level’s yellow orbs and three large green tokens. Needless to say there’s something for all styles of platformers alike. Stages are ranked from S downwards taking into considering the amount of time taken, how many of the collectibles have been picked up, and how many times Kuro has died.

Beyond its gameplay, Shadow Blade has an narrative feel that is presented between stages through a form of half-animated comic book strip panels. Assets within these move making it more than a simple slide show, and having these present makes the breaks between levels segments much more entertaining than what we usually get in this kinds of indie games. These segments are not short, either. The cutscenes themselves also happen at just the right points of time through the adventure, allowing fingers a break from the button mashing.

As mentioned earlier, Shadow Blade is a mix between more classical elements of Japanese architecture, and the much more rough and gritty cyberpunk genre. Starting off in what seems to be a dojo we are instantly introduced to some ruffians that clearly belong in a different century. Fast forwarding through the tutorial and you’re suddenly introduced to a mech, clearly shows off that this game is set in some weird alternative universe that is literally a mix of old and new. The cyberpunk becomes more prominent later on with a full set of stages set inside slums with neon posters that contrast with what came before it. It all works out as, oddly enough, Kuro looks like he belongs in both settings. 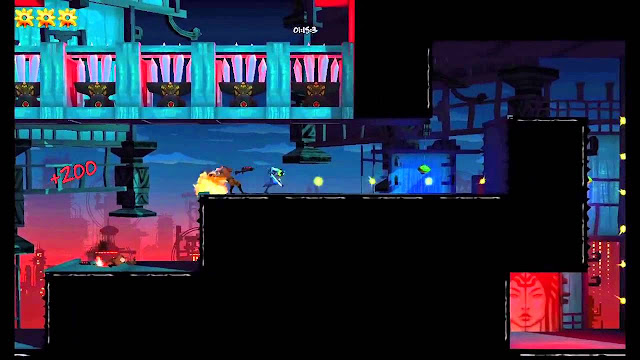 With everything available in the main story mode from the collectables to the animated comic strips, there is also a challenge mode that truly test your skills with some rather insane situations for Kuro to overcome. These can be done at any time regardless of the main mode but I would recommend holding off until at least the basics of this game’s brand of ninjitsu down pat. Because it really can be very difficult and not that enjoyable until you’re wielding Kuro like a glove.

While Shadow Blade: Reload may not re-invent the platformer genre, it is both pretty to look at and fun to play. With multiple stages, collectables, difficulties, and challenges there’s more than enough ninja action to keep Kuro busy for a while.