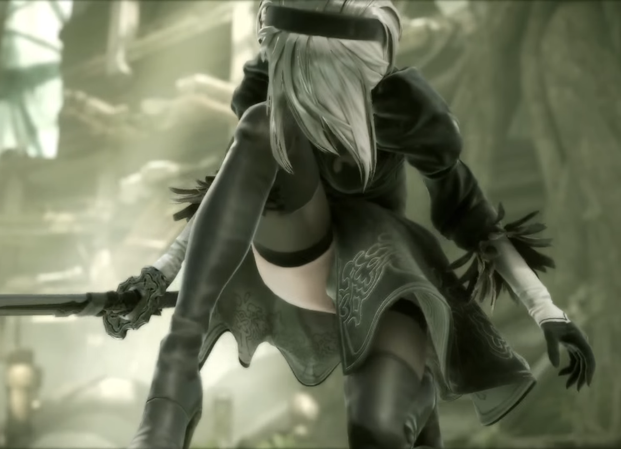 Nier: Automata, the absolute surprise of E3 last year (given the original Nier was such a commercial failure that it sent its developer out of business), is inching ever closer. Thanks to E3 this year we now have a launch window; the game lands in early 2017.

We also have a new trailer, which is all I needed to see – this is going to be the game of 2017. It brings together the same creative team that drove the original Nier (including Yoko Taro, the greatest arteur going around games at the moment), and combines it with the talents of PlatinumGames – a developer I think we can all agree does action better than almost anyone.

This is a direct sequel to Nier, the smartest game ever developed, and looks like it’s going to have the same downbeat, nihilistic view on the world. The enemy designs, however, are a massive step up. Most of Nier’s enemies were shadowy nothings – more road block than something substantial, but in this game we’re seeing the full extent of Taro-san’s creativity at work.


The plot, according to the E3 press release:

Invaders from another world attack without warning, unleashing their secret weapon: the machines. In the face of this insurmountable threat, the human race is driven from the earth and takes refuge on the moon.

The humans develop an army of android soldiers to fight back against the mechanical horde, but succeed only in slowing its advance. To break the deadlock, a new breed of android infantry is sent into the fray: the YoRHa squad.

In the forsaken wasteland below, the war between the machines and the androids rages on. A war that is soon to unveil the long-forgotten truth of this world…

Oh, and the game has a female protagonist. Looks like that’s possible after all. Yes, Zelda, I’m looking at you.