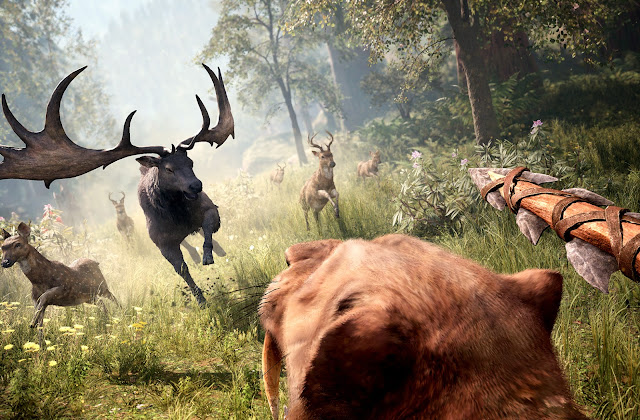 Okay, so one of the coolest features in Far Cry Primal was easily the fact that Ubisoft commissioned an entire language for it to tell its story through.

Now, creating a language is not a simple matter of taking existing words and coming up with some nonsense sounds to replace them. Languages require structure, form, tone, and a million other subtleties that mean that one language is different to another. And, when you’re creating a language that would be a dead language today (i.e. a language that primitive people would use), it becomes even more difficult. Because language is a product of culture, and we don’t necessarily have enough of an understanding about primitive cultures to fully build cultural context into them.

But that didn’t stop a duo of academic linguists, Andrew and Brenna Byrd, from taking what we know about some ancient languages and adapting them to suit the narrative and setting of Far Cry Primal.

Digitally Downloaded (DD): Could you give me a brief outline on how you go about creating a language? It’s not just a matter of replacing existing words with new sounds, right?
Andrew Bryd (AB): If you were to create a language completely from scratch, you could really start anywhere. It depends on what your goals are. Does the language need to be learnable? Does it need to sound a certain way? Do the words need to be short or long or does it matter? Is there another language that you’re using as a model or do you want it to be completely different from most languages? And finally, will the actors or language learners be able to pronounce it? If you look at the different conlangs out there, you’ll see how each one was developed with these questions in mind.

For our purposes, a believable version of Proto-Indo-European (PIE) was key, but the language also had to sound right for the audience and work with the gameplay. About 95% of the vocabulary is based directly on a PIE root and our knowledge of how human languages work, and the other 5% still had to be probable for PIE, so there really wasn’t anything built from scratch for this game. I think if we were to build a language from scratch, given that we are both partial to phonology (sound systems), we’d definitely include as many fun sounds and sequences as we could.

DD: Was the language of Far Cry Primal based on any real-world language? If so, which, and why did you base it on that one?
Brenna Byrd (BB): When Ubisoft approached us about creating the languages for the game, from the beginning we knew that all of the languages would be based on Proto-Indo-European (PIE) and be related to each other in some way, both in vocabulary and in grammar. For example, the PIE word for ‘brother’, bhráχter (the source of Latin frater, Old Irish bráthair, and Sanskrit bhrāter) became Izila bráxter and Wenja brashtar.

While we took certain liberties in creating Wenja, designed to be “Proto-Proto-Indo-European”, the Izila language is basically Proto-Indo-European, which is an extremely educated guess as to what was spoken thousands of years ago. No one knows with absolute certainty when PIE was spoken – many (such as ourselves) believe it was spoken 5000-7000 years ago, but other scholars have pushed the dates back much further. Since Wenja is designed to be an earlier stage of PIE, it is certainly possible that something that looked similar to it could have been spoken at that time. Note that there is also no established rate of language change, meaning that some languages change much more quickly than others, especially when they grow and spread out. If we are talking about small tribes of only a couple hundred people, it’s very plausible that the language would not have changed very drastically.

DD: When you designed the language, was there the intention for the player to be able to form an understanding of it as they play? If people want to understand the language, how does the game “teach” them it?
AB: Players will pick up common expressions because we learn to make associations between specific words and repeated tasks. And just like with any living language, the more you want to learn, the more you will. You can play the entire game and ignore the language, just as some tourists can spend a week in a foreign country and not figure out how to say ‘thank you’. Alternatively, you can pay attention to everything the characters are saying, repeat it back and make some effort to remember it, and you’ll start to feel like you know enough to hold a small conversation, just like those international travelers who end up making friends with the locals after a week and learning a basic survival version of the language. For those especially interested in learning the languages of Primal, check us out on Twitter @SpeakingPrimal.

DD: Why do you think it’s important for the game to have a proper language, as opposed to simple gibberish that we see used often in films and games when designers want to represent a non-existent or “new” language?
BB: You might not pick up on dialogue being gibberish if there are only a few lines, but if you play 20 hours of a game, the gibberish thing will get old fast. It’s human nature to pick up on patterns of languages and to learn quickly what words mean. Already many of the fans have learned some of the Wenja vocabulary just through their interactions in the game.

DD: As you were designing the language, were the aesthetics or narrative of the game an influence at all? If so, could you outline for me how?
AB: The narrative not so much, as we had to create the languages before we received the scripts, but certainly a number of our choices within the languages line up with the character of the individual tribes. For instance, the Wenja are a grounded people, and the rhythm of the language was designed to be just that, with a regular word-initial stress pattern and lots of “earthy” sounds such as “sh”. On the other hand, the Izila are a tribe who believe themselves to be above all others, and when they move they “float” through space. The sing-songy rhythm of the Izila language was designed to mimic it (and just so happens to be exactly what PIE did thousands of years ago).

DD: How difficult is it to teach an actor an entirely newly created language, and help them develop the correct inflections, when it might be like nothing they have heard before?
BB: Some of the actors said it was the most challenging project they had ever worked on. Not only did they need to learn to pronounce their lines, but they had to match the character’s emotions and physical movements to the words in this foreign tongue. It was quite a juggling act. To teach them, we used a combination of techniques that we use when teaching living or ancient languages ourselves.

We trained the actors via Skype before the filming on set, and then there were immersion classes and one-on-one lessons, as well as on-set assistance. Each actor became quite knowledgeable in the vocabulary, sounds and grammar of the language their character spoke, so much so that one actor even caught a couple typos in the Wenja script.

DD: Why do you think it was important to the game designers that the game was backed by an authentic language?
AB: The creative team at Ubisoft wanted the game to be completely immersive. Any modern language in a setting 10,000 years ago would have felt off and would have jolted you out of the immersive experience.

DD: In terms of the scale of a project like this – could you see game development getting to the point where people such as yourselves are regularly recruited to design original languages for the game? Is it something that you would really need the resources of a company like Ubisoft to achieve?
BB: The creation of languages for story-telling is not new by any means – people like us are regularly recruited to design original languages for games, television and movies. What kind of resources you need depends on how much you want translated and how accurate you need the language to be, or in this case, how close the language needs to resemble a reconstructed proto-language like PIE.

DD: Just how much “additional work” needs to go into the construction of a language, beyond what appears in the game? How many words were created and never used? Was there a full writing system, grammar, and style rules that needed to be created as well?
AB: It’s difficult to say, honestly, as we weren’t keeping track of our hours in the initial stages, but months of preparatory work went into the creation of these languages. As for your second question, the lexicon was initially based on the word index from Andrew’s recent monograph The Indo-European Syllable, and it’s so likely that a number of words from there were never used. As for the writing system, one was developed but not implemented, since writing wasn’t invented until around 7000 years ago. And yes, grammar & style rules were created, many of which you can see throughout the game.

DD: Finally, do you play games yourselves? What games are you fans of?
BB: My all-time favorite game is Myst, and she’ll play anything with an open-world, exploratory aspect to it.

Andrew loves RPGs – he’s always found the sheer enormity of the games and the ability to craft your gear to be extremely satisfying. And for these reasons we’re both completely hooked on Far Cry Primal.