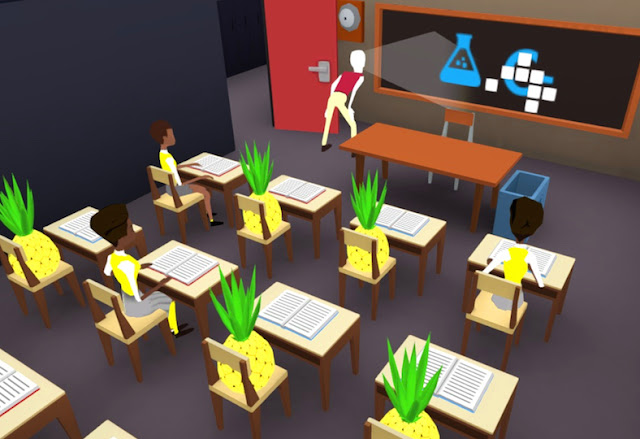 If there’s one thing that education and video games have in common, it’s that everyone seems to want to pay the very least they can to get the very best product possible – oftentimes putting an unbearable strain on the suppliers of the product. Teachers might have to work additional hours after school to make up for a lack of resources, while a game developer might pour years of their life into an indie title only to have it languish in the depths of Steam because it didn’t get a day one sale price. Both occupations are marred with disappointment, helplessness and a small glimmer of triumph when everything goes right – and those three things just happen to be the three pillars of No Pineapple Left Behind.

Developed by Subaltern Games, No Pineapple Left Behind is a school management sim which harks back to the hardcore business simulators of old where completing missions was the name of the game and bankruptcy was a frustratingly common consequence. The premise is that a wizard has come to your school and zapped your students into becoming sentient pineapples: beings with no personality or identity but nonetheless a fantastic ability to score well in standardised exams. Pineapples are much simpler creatures than kids, who get distracted in class often and need legitimate effort to teach effectively. The goal is to somehow stop your school from going bankrupt in a world where debt is everywhere and income is inexplicably tied to your students’ results. The game is split across twelve schools, each with an interesting scenario to complete and a difficulty level that’s out of this world.

The difficulty is mostly grounded in Subaltern Games’ desire to satirise the overbearing and often nonsensical requirements of the No Child Left Behind policy. This controversial policy, enacted by the Bush government, ties school funding to student performance. That means that your income will come from, and only from, how well your students do at school. You need a D+ average to make any money at all, with the government actually taking away money if you finish on an F grade. In any other sim game, this mechanic would be lambasted with complaints from players and reviewers alike, but No Pineapple Left Behind is trying to make a point with its gameplay. Like in real life, keeping a school afloat based on student test scores alone in game is a difficult affair – and one that may well result in some unethical business practices.


If it sounds like you’ve been set up to fail, that’s because you kind of are. If your school is disadvantaged, or has students from a disadvantaged background, of course the students will have difficulty on an aptitude test standardised across the country. Unfortunately, the American government has decided to punish schools who don’t meet these minimum test scores by giving them less money – and that means less resources to buy essential things like teachers, resources and facilities. It only takes playing one or two levels to realise how completely unfair No Child Left Behind is, but Subaltern Games isn’t going to be swayed until every player sees the human cost of the policy for themselves.

A key mechanic in this game is to scrounge for as much money as you can, giving your kids the best education possible with the lowest cost. You’ll do crazy things like hire a Vice Principal to scare kids out of the hallways and into the classroom, but nobody’s going to pay his $2000 a day salary so it’s likely you’ll be firing him on the same day you hire him. You will probably then hire another one the next day for free, and the process goes on.

Teachers get the same disposable treatment – they deliver classes in the form of magic spells that increase the students’ grades while also affecting their “humanity” quotient – more on this later. They can also shoot lasers that affect students’ personalities in some ways, humorously representing the way teachers can influence who a student becomes friends with, or even the student’s decision to cheat on a test. Everything a teacher does costs energy which is only replenished at the end of a school day by paying them money, and if a teacher is low energy they might fail a magic spell and cause the grades of their kids to drop. At this point, you could pamper your loyal teachers so they unlock more powerful magic spells, or opt to save money by firing your sad, tired staff and hiring fresh new ones.

As for the students, each of them has a grade and a humanity level. When a human child hits zero humanity, they become a pineapple, and when a pineapple hits a hundred humanity they become a human. Pineapples follow simple behaviour and don’t act up in class, but their grades are capped at a B+. Humans can reach the max grade, but they’ll also have traits such as crushes, bullies and friendships that will distract them away from their studies. As a school manager, you can either turn all your students to pineapples through the most degrading of lesson plans, or micromanage a legion of kids each with their own interlocking hopes and desires.

I was a little disappointed with how the “humanity” aspect of the game was handled however. The developers have been fantastic in incorporating a lot of diverse traits into their students, but their representation through the same menus as the pineapples robs them of the humanity the game claims they have. I would’ve loved to have seen students actually behaving like people, saying real words and thanking the player if they chose to play ethically. Instead, students were just a more complex pineapple with traits to deal with, and at times I found it hard to sympathise with the little peeps on my screen; especially when they do things like randomly going on a walk to their locker after the lunchtime bell had rung, earning themselves an instant fail.

The scenarios for each level are all based on the developers’ experiences in teaching high school, but with a magic realist bent for added humour. In one level, the bus company has gone on strike and is forcing students to arrive late to class. Students who are late get an instant fail – good luck trying not to go bankrupt on this level! Another has you managing overcrowded classrooms because your school is in an underwater base and half of it has sprung a leak. Subaltern Games really goes to town on their parodic vision of the American high school, with everything from cliques and subcultures, calls from parents and even high school football getting a mention in gameplay form. 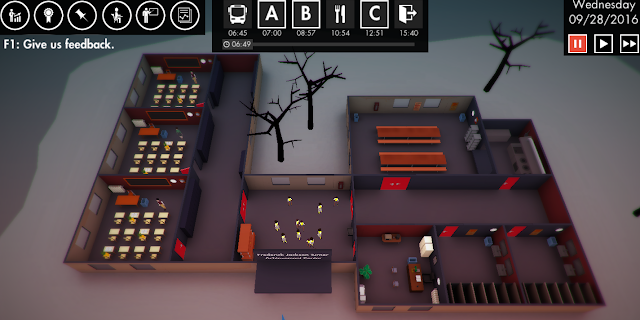 The storyline sounds funny on paper but once you hit the ground and get into the managerial aspect, the fun gets sucked right away. The difficulty level here is high, and unless you approach each level with a specific game plan you are going to fail miserably. One clever design aspect is that most levels can be beaten easily if only a player resorts to a morally questionable solution. In one of the earlier levels, you are tasked with making sure a male child isn’t bullied for wearing makeup to school. Now you could have your teachers zap all his friends to stop them from teasing, but it’s much easier to dehumanise the boy into a pineapple. Pineapples don’t have personalities, don’t get bullied and don’t wear makeup. Just try not to think about what the real life equivalent of quashing a child’s sense of individuality might look like.

As for production values, No Pineapple Left Behind does need work. The graphics are charming at times but the HUD is cluttered and full of fiddly popup boxes when there is a lot of unused space at the corners of the screen. The soundtrack is also nothing to write home about. The design is just a little bit too inconvenient for a real time management game – so much so that I found myself wishing that No Pineapple Left Behind was turn based so I could make strategic decisions in peace without having to deal with half a dozen popup windows.

So this brings me to the controversial part of this review. Is No Pineapple Left Behind fun? No, not really; it’s about as fun as watching documentaries about international corruption, or slowly watching an old house fall prey to erosion. It’s slow paced, punishingly difficult and quite sad at times despite billing itself as a comedy, so I worry that this game won’t find an audience with management sim fans looking for a good time. Admittedly I did derive a lot of enjoyment from beating some of the harder levels, but their solutions were so specific that I felt more like that I was playing a puzzle game than a sim. 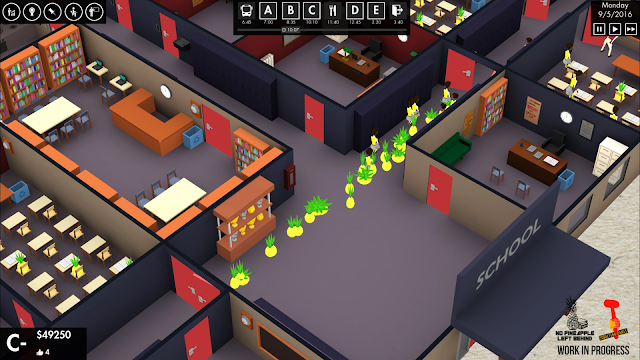 No Pineapple Left Behind isn’t made for your enjoyment though, and Subaltern Games makes that perfectly clear. This is a game designed to make an important point about education. If a player who stumbles upon this title on Steam becomes inspired to make serious educational reform after watching their students get dehumanised into tropical fruit, No Pineapple Left Behind will have all been worth it.