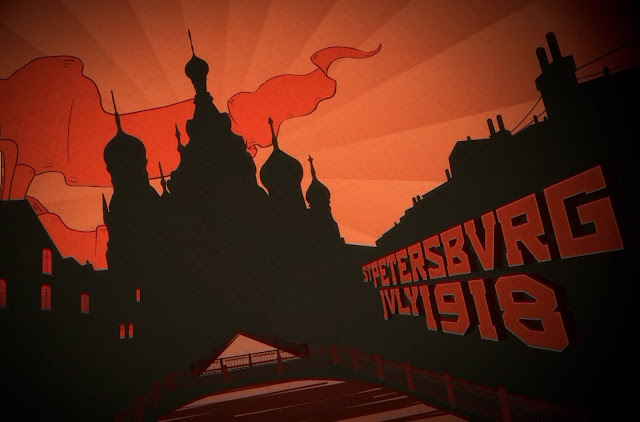 I really didn’t think that Climax Studios would manage to outdo its effort with Assassin’s Creed Chronicles: India. The Chronicles series has always struck me as the most experimental Assassin’s Creed titles that we have seen to date, and on top of that, India was the most aggressively progressive title that Ubisoft has greenlit for a very long time; starring a Muslim hero in an exotic setting when the game’s industry… well, mainstream entertainment as a whole just does not do that right now. And because it did that, India seemed to be the ultimate realisation of what the series wanted to be. I thought it could only possibly go downhill from there.

Where Ubisoft plays it very safe with the big games in the Assassin’s Creed franchise, to the company’s great credit it is far more experimental with the smaller releases. Both in terms of casting leading roles that could never be heroes for the blockbuster-that-must-appeal-to-all, and in taking some risks with the gameplay itself. The Chronicles trilogy has come to epitomise this approach to me, so I was never quite sure on ending it on this particular note.

As interesting as the formation of the USSR is, I was concerned that with Assassin’s Creed Chronicles: Russia, the franchise would find ourselves right back in familiar territory, with a safe, white protagonist and a nice, neat, moral code to justify everything that we’d be getting up to.

Gosh I love this game. Second play through ! #PS4sharehttps://t.co/JCh1jSFDNz pic.twitter.com/kp9R1jGCkR


After India, and China before it, I shouldn’t have assumed anything and had some faith in Climax. Assassin’s Creed Chronicles: Russia is in so many ways the best of the three. In a trilogy that had no problem whatsoever in trying new things, the massive shift in tone and behaviour in this one is daring stuff, potentially even alienating fans of the previous two. But if you like your stuff creative, then you’re going to appreciate this one on principle alone.

The most immediately obvious difference between this game and its predecessors is the art style, of course. The other two games were exotic and beautiful. Assassin’s Creed Chronicles: Russia is dark, grim, powerfully industrial and striking. The foreground makes heavy use of high contrast black and whites, broken only by a deep red, representing both soviet ideology, and the violent anger that seethed through society at this particular point in history. This red guides players through the adventure, as it typically represents things that our assassin can climb or interact with. It’s the lifeblood of the game’s narrative, then, and is also then the perfect visual symbol to represent our hero himself.

Nikolai Orelov is an angry, unlikable protagonist. This is the point. He’s a deeply conflicted, miserable sod that is planning on taking on one last mission for the Assassins before using the money to get out for good. Where the two previous heroes had noble, playful, cheerful and even sexy moments, dour old Orelov barely manages to break away from his droll melancholic Russian accent long enough to convince us he’s not the enemy. He ends up doing the right thing, of course, but the socialist revolution in Russia was not a pleasant part of that country’s history, and this game really doesn’t hold off on representing that and highlighting just how grim life was for the people at the time. 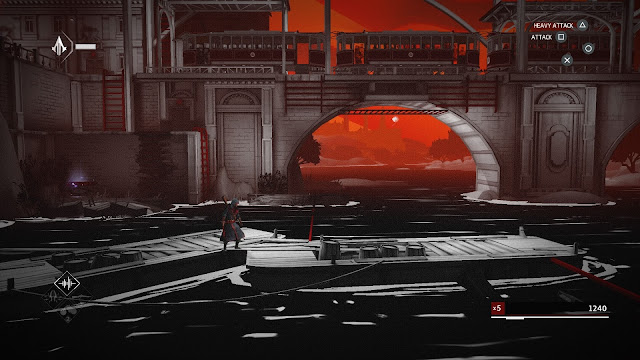 What I loved most about the presentational elements, however, was the use of Soviet Realist and Propaganda visual motifs that are littered through the environments. In Chronicles: Russia, the sky is drawn in a powerful, stark set of bold colours that are very reminiscent of the old posters and fliers that the Soviet propaganda machine would churn out. The heavily contrasted environments and architecture reminiscent of the filmic work of the likes of Sergei Eisenstein with Battleship Potempkin or Alexander Dovzhenko’s Earth. As a student of these films, and these art styles (I studied Soviet politics and art as part of my university degree, back in the day), I know that the development team have done their research well. The ideology has been stripped out of the art, or even deconstructed to be quite critical of what the art is meant to represent, but the raw power that this art style conveys, supported by a very Russian soundtrack of dirge-like hum-chanting remains. If there’s criticism to make here, it’s that it’s almost overwhelming; it’s a little hard to care about the moment-to-moment gameplay when at every turn the environment is demanding all of your attention.

As with the other Chronicles games, Russia is historically authentic, and people who are less familiar with the events surrounding the revolution will learn something if they’re paying attention. It’s only told through snippets, and if I’ve had one frustration consistent to the Chronicles games I do wish that Climax Studios had more respect for the appetite for knowledge in their players. I am familiar with enough with Russian history that I wasn’t looking to fill gaps in my knowledge bank after playing this one, but in the two previous games I would spend hours reading up on the relevant Chinese and Indian history, because I was less familiar with those particular eras of history. Full credit to the developer for making me want to know more – the ultimate goal of anything with educational merit – but I don’t think it would kill the developers to give players a little more context in-game.

The gameplay of this one is really quite different, too, and engagingly so. By this era of history, industrial modernisation was in full swing, and so for our hero, Orelov his most precious tool is his silenced musket. There seems to be an even lower reliance on melee combat in this one than in the previously oddly pacifist titles, and the gun is as important in slipping around the place undetected as it is for combat purposes. Combat itself is greatly discouraged, with even the most basic enemy a pain to try and take out after he spots you (let alone the hordes that soon accompany him), but that gun can be remarkably useful in creating distractions by taking out floodlights and the like. For the most part, Assassin’s Creed Chronicles: Russia wants you to stealth your way through each situation, and this means timing movements to avoid enemy patrol routes, hiding in concealment while waiting for them to pass, and creeping low in order to pickpocket valuable items from them. Each encounter is a puzzle to be solved, and a truly masterful player will be able to make their way through this game without attacking – or killing – almost anyone outside of the mandated “boss” targets. 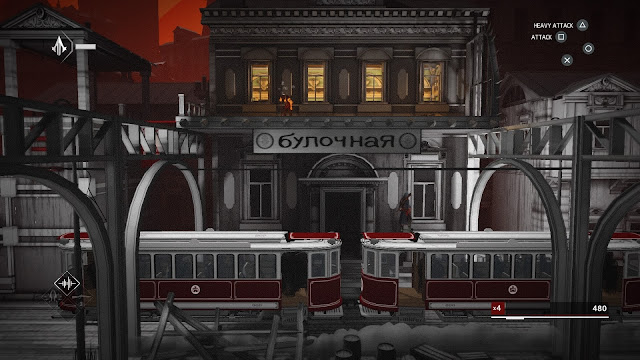 I found the use of sniping spots to be quite fascinating, too. Periodically there are places where Orelov needs to set himself up, zoom lens and all, to take out enemies or key targets to clear his way forward. On one level the sniping introduces a gameplay feature that does separate Russia from its predecessor – just in case the aesthetics weren’t enough to reinforce for you that you’re in a very different place to China or India. But these sequences, which are thankfully not overused, also create a clear allusion to politicised violence, which further helps to develop the game’s deeper themes.

Anecdotally I felt the level design lacked some of the creativity that I had come to appreciate in China and India. Those titles had such complex, nuanced stealth sequences, requiring every trick in the book imaginable to remain hidden that Russia felt positively blunt by comparison. It’s almost like Orelov is too no-nonsense to bother showing of his athleticism and subtlety. But that might just be because, while the gap of time between the releases of China and India meant I had time to really start itching for more, Russia’s landed far, far too soon after India. I don’t know what drove that decision (other than Ubisoft deciding it needed to pad out its quarter release schedule), but it was a poor one.

Tonally, though, I can’t fault Assassin’s Creed Chronicles: Russia. It’s different, it’s creative, it’s stark, and I loved every second of it. I do hope that the trilogy has been enough of a commercial success that Climax can be recruited to build more of these, because I do love the modus operandi; taking more “obscure” periods of history and then using them to frame Assassin’s Creed games that simply wouldn’t happen otherwise is something that I think is very worthy. 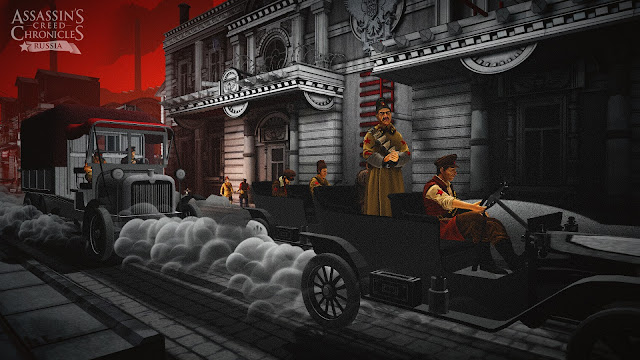 And hey, I can put in my request for the next trilogy now; can we please have something focused around the independence of one of the African nations from colonial rule, Assassin’s Creed Chronicles: Kyoto, and if they want to get semi-political again, having an assassin either working with or against Che Guevara would be fascinating, no?