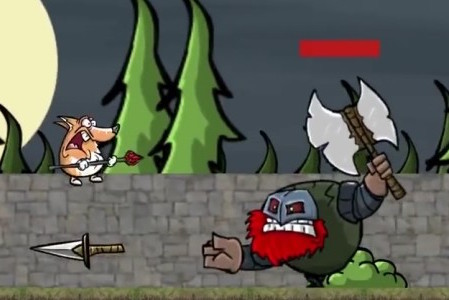 Corgi Warlock is not a concept that was doomed from the start. It has a wacky setup (appropriate for indie games like this), a talented individual behind the project, and a host of warrior animals. Unfortunately, it fails in the execution. Perhaps “fail” is too strong, but seeing Corgi Warlock had the potential of rubbing shoulders with indie greats like Super Meat Boy and Shovel Knight, the fairest I can say is it’s a missed opportunity. I mean, an unstoppable corgi taking on sheep, dragons and, among other assortment of animals, a giant evil skeletal bunny? Just how did they manage to mess that one up?

It’s apparent the developer, Corgi Xander Arcade, did extensive research on the indie gaming scene before making Corgi Warlock, because this game seems to be cut (more or less) from the same cloth the likes of Castle Crashers (a good example) and PowerPuff Girls: Defenders of Townsville (a bad example) – as evidenced by the use of Flash-style graphics and animations and a very cartoony setup. But where the aforementioned two occasionally add more spice to flavor, Corgi Warlock hardly moves from the “go right, kill enemies, fight boss, proceed to next chapter” mentality. In fact, it stays so rooted into that ground you begin to wonder whether the developer paid any attention to the other aspects of his inspirations at all. You know, the aspects that make a video game good and fun to play.

The game calls itself a platformer, but this is a misnomer: there’s hardly any platforming, and when the odd platform does appear, it refuses to behave like one. The baffling logic behind the placement of the floating platforms (bar the ones in boss battles, which are at least interesting) seems to me the developer did not completely understand their purpose. All in all, the ‘platforming’ aspect of Corgi Warlock is practically non-existent and does as much justice to the game as Joshua Michael Stern’s decision to cast Ashton Kutcher as Steve Jobs in the 2011 movie, Jobs, just because the actor bears striking resemblance to the late tech pioneer. Though I personally enjoyed the film, and Kutcher’s acting, I couldn’t shake off the fact the director was more interested in capturing the angles from which Kutcher resembled Jobs more than actually giving the actor a purpose of being on-screen. This is the case with the arbitrary placement of platforms in the game: they give the effect that you’re inside of a platformer but hardly do anything to do something interesting with it. 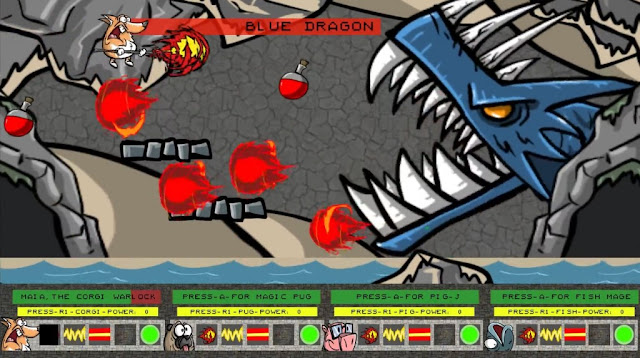 You’d think a former Pixar designer (with 15 year’s experience, no less) would make an attractive-looking game that plays exactly like the excellent cartoons. Sadly, that is not the case and Corgi Warlock is one of the least-attractive games I’ve played in a while. The animations are stiff and the expressions are surprisingly limited and restrained – a far cry from the usually excellent stuff Pixar regularly churns out. To prove I’m not some angry, frothing-at-the-mouth heartless troll, I’m willing to overlook the less than stellar production as I completely understand that designing and animating for a video game company is different from that of a film company. And that this is an indie game further accentuates the fact. But still, given the man’s obvious talent, and the clear dedication and time that went behind the game, it’s a mighty shame to see an otherwise decent game go into wasted potential territory. Maia (the eponymous heroine) is very under-developed and given zero personality – which makes connecting to her very, very difficult. After just a little while I even stopped looking at her directly and instead focused on her projectiles.

Speaking of which, the weapons in the game are uninspired but extremely over-powered. You start off with the basic fireball attack. A few hours and upgrades later, it will still be the fireball attack (now upgraded to multiple fireballs, of course) that you’ll be using to defeat your enemies. Just like how the stock weapons are better than the user-generated custom weapons in Team Fortress 2, the very first power-up you start off with is literally the strongest – and most effective – that you’ll find in the game. However, the relatively short range of the fireballs means you’ll occasionally have to resort to the other weapons in your inventory during large enemy numbers, namely: Corginado; laser beams; and lightning. Each takes a couple of seconds to cooldown after one use, so use them sparingly. Besides weapon upgrades, you also get health upgrades, such as my favorite: Instant health refill. Each time you use this one, the health bar is restored by around 75 per cent. As soon as I received this upgrade, what little challenge the game had went flying out of the window, as the only downside is that its cooldown time is nearly 30 seconds. And that’s a pity, as the game shows signs of being quite challenging in places, but that health refill turns what was clearly meant to be a challenge into a cakewalk.

The boss battles are akin to low-budget 50’s sci-fi movies: lame but at the same time enjoyable. There’s absolutely no strategy required to take them down. You basically end up doing exactly you’ve been doing the entire time in the levels leading up to the boss battle: pointing right and shooting until they fall over. The one and only difference is they take longer to die. Honestly speaking, the regular enemies end up putting up more of a challenge than the bosses because the former charge at you in droves. 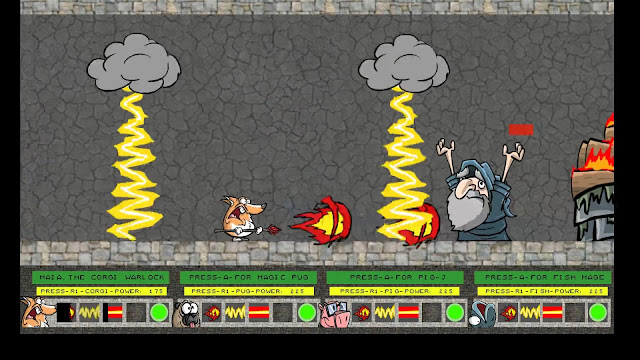 Despite the laundry list of things that are just not right about Corgi Warlock, it remains an enjoyable game. What’s more, for a first attempt it’s not that bad at all. The game has all the hallmarks of a fun indie effort: an insane cast of characters, good enough challenge, and a cartoony production. It’s just in the execution and slightly confused gameplay is where it falters and unfortunately, casts a big shadow over what little positive points the game has to offer.