Kromaia Omega deserves a gold trophy and a plaque that reads “most ambitious shoot ’em up of the decade”. It’s not as though the genre is starved for novel ideas; there have been countless shakeups to the classic 1980s arcade formula with titles like 99 Bullets and Everyday Shooter that buck expectations through inventive concepts or pleasing gimmicks. Yet in terms of raw scope, nothing can touch Kromaia with a ten foot pole. Now, I can’t promise I’m enthralled by all of its design choices, but its artistic vision and mission to revitalise the genre command respect.

In 2015, developers can comfortably churn out retro-style 2D shooters that satisfy a targeted niche so long as the underlying mechanics are well built or exceptional in some way. The actual process of designing them typically takes less time and manpower than other types of games due to the conservative nature of the genre (remember Action 52?). You don’t need a ton of levels or ultra flashy backgrounds to design a thoroughly memorable shoot ‘em up.

By simple virtue of being 3D, Kromaia is already more daring than its contemporaries. The intricacies of three dimensional space are instantly apparent in rail shooters like Star Fox, as are their need for more complex models and a very different approach (not to mention wads of cash an indie might not have in that piggy bank under the bed). Consider that this game is not a rail shooter but a revolutionary free-roamer and suddenly it’s no mystery why it took ages to develop. 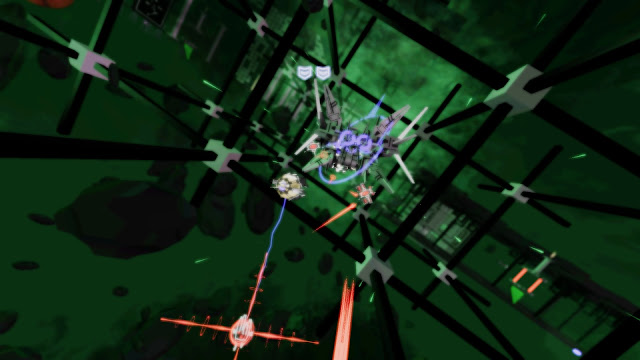 Yes, Kromaia is divided into smaller levels like the innumerable archetypal experiences out there, but each is a massive arena that functions closer to the shooter equivalent of a Banjo-Kazooie stage. Before you hurt yourself wrapping your head around that comparison, it’s important to note the greater sense of direction here via a compass system that forever points players towards objects of interest. Some loathe when player freedom is hampered by overbearing suggestions, but the subtlety of the radar’s graphics means it’s never intrusive (and, frankly, my brain would have imploded without it).
Within these arenas, you’re performing the expected galactic cleanup jobs. You know, shoot down the baddies until the big one shows up and then shoot him too. Nonetheless, additional goals like collecting keys add a compelling new wrinkle only really possible within a three dimensional space. Your direction in any given level is dictated by a combination of optional and mandatory MacGuffins as well as the pesky legion of foes on your tail.
There’s so much more going on underneath Kromaia’s hood that propels it out of the stratosphere. Enemies adapt their movement speed and patterns according to player reactions, worlds have their own physics that make interplanetary exploration exciting, and there’s a plethora of vehicles to choose from that all operate uniquely. The developers revel in taking the underutilised mechanics of other titles and jigging them to suit their own fresh concepts. 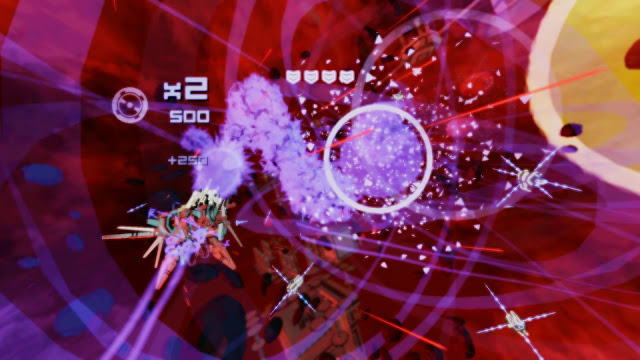 It doesn’t stop there. Kromaia Omega boasts a narrative that schools the vast majority of its 2D equivalents. From the get go, various vague messages pop up on the screen during the action as a mysterious voices demands you commit deicide. This one is best experienced without a lick of foreknowledge as it’s thought-provoking in spurts and ultimately gives players something to stew over whilst annihilating hordes of generic warships. Dialogue tends to be carefully chosen so as to drop hints about both the player and the thoroughly sketchy narrator without blatantly answering questions. The game probably isn’t going to win any awards for its storytelling depth when the game mechanics so clearly take center stage (which is a shame), but the intent to make the genre a more reflective experience is appreciated alongside the abstract sci-fi layers that complement the game’s motif.
As with many pioneering games, though, Kromaia isn’t necessarily the most comfortable experience initially. My first half hour was a disorienting one spent circling the overworld trying to grasp just what I was I looking at. Even after a solid time sink, the act of playing it makes me want to pay my local optometrist a visit and I’ve never encountered any sort of motion sickness in decades of playing games. I reckon it’s due to the art direction, which is a tad too simplistic in its portrayal of space and lays on several effects such as blurring quite thickly. In certain stages, your crosshair will flat-out blend in with your surroundings due to limited colour choices. Unlike the PC release where users can tinker with graphics settings to find an optimal experience, PS4 players have to adapt to a space-roaming experience that sometimes feels bizarrely claustrophobic.
Were my stomach stern enough to handle all the twists and turns, I’d still object to the game’s bloated length. The existing stages, though brief, would have been sufficient to demonstrate the raw potential of a free-roaming shoot ‘em up. Instead, players need to revisit the game’s areas multiple times to advance a single campaign attempt. I can accept that developers are pressured to provide players with perceived bang for their buck, but since the various ships on offer play so distinctively, why not just spin those off into their own campaigns and have a series of shorter and sweeter modes that are all infinitely more alluring to revisit? On higher difficulties that are unforgiving with checkpoints, it feels unfair to lose on the third iteration of a stage you’ve beaten multiple times because you’re jumping around between play styles. 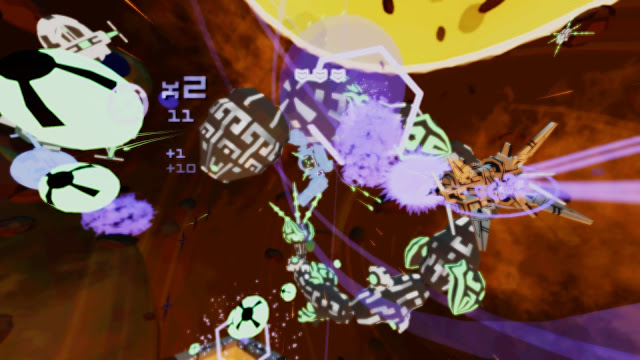 Nevertheless, Kromaia Omega’s technical shortcomings are kinks that can be ironed out. That I’m lavishing a game that physically ails me with so much praise is a testament to its glorious, grand vision. If other companies are bold enough to follow in Kraken Empire’s footsteps with similarly intricate shooters, this game could be the launch pad for a whole new subgenre and that’s exciting stuff indeed.