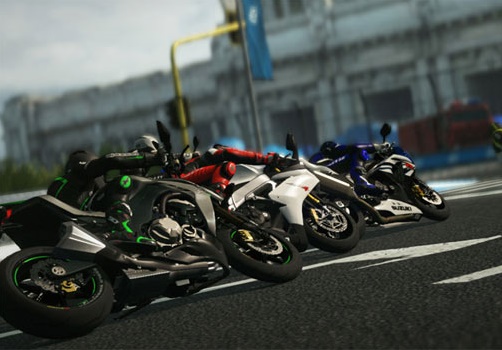 There are various compelling reasons why motorcyclists love to ride. For my father, who took me for speedy joyrides on the back of his Suzuki during my childhood, it’s about the freedom and the wind and the sense of control. For me, though, it’s about how riding places my mind into a state of heightened clarity. When my backside is flexing confidently in the saddle of my two-wheeled stallion, I feel and anticipate the contours of the highway. I notice motorists texting and swerving in the surrounding lanes, and proceed to distance myself from their potential carelessness. I smell the oddly pleasant combination of fresh grass and exhaust fumes. I actually appreciate the natural majesty of the mountainous horizon. When I’m riding, I’m genuinely in the moment, focusing on the beauty and dangers of both my natural and civilized habitat.

Although I can’t, thankfully, inhale the eau de toilette of exhaust and fresh grass through a Dual Shock 4, Ride, with its overwhelming collection of motorcycles, varied track locations, and gameplay that mixes the skill and finesse of a simulation with the accessibility and forgivable essence of an arcade experience, placed me, comprehending nothing besides my bike and its relationship to the environment, into a nearly accurate translation of “the moment.” It just a damn shame that abominably lengthy loading screens, middling character models and environmental graphics, and tame sound design all rallied together to peel out on my face and take me out of it.

As Tom Cruise in Days of Thunder recklessly showed the world, becoming a revered champ in a racing sport takes time, talent, and the type of terrifying cockiness on the speedway that would have your blonde neurosurgeon love interest correct in assuming that your favorite shade of black is “Death Wish.” And Ride, with its bevy of motorbikes, is no different. With eight racing events – each of which contain four to eight sub events that in turn harbor around four to six individual races – and over 100+ handsomely rendered bikes to purchase, you’ll need the time; with physics that exist to see you ragdoll into a wooden billboard unless you familiarise yourself its rules, you’ll need the talent; and with opponents who magically blaze past your superior tuned bike on straightaways, you’ll need the cockiness of a prince at a peasant pageant.

And like that prince at the peasant pageant, adjusting to the customs of your strange environment (mechanics) might take a few hours, if you’re not practiced in similar types of racers. A motorcycle is only as swift and stable as the rider’s trained constitution, so even a tiny degree of understeering or delayed breaking will catapult your avatar’s stiff corpse off her seat and send her sliding across the asphalt as though she’s a helmeted loon on the world’s most chaffing Slip ‘N Slide. And since flying off a bike is so much easier than being jettisoned, sparks shooting out of your back, from the seat of car, you’re offered a failsafe as well as a few tools to make the learning process a lot more approachable.

The failsafe is a rewind feature, the number of which you can set (from 0-9) at the beginning of any race. When you crash, get rammed, or unconsciously wander off track, pressing L1 will allow you to rewind back to a favorable point where you can fix whatever small mistake you just made. And while you’re adapting to the feel of your bike in the first few races, this mechanic will be your wingman. You’ll abuse this feature in the way a professional Call of Doody player abuses caffeinated suppositories. (I kid the kids of Call of Duty. They’re better at that game than I’ll ever be at anything in my life.) But this feature, along with the options to switch between Standard and Pro physics, raise or lower your opponents’ A.I., as well as the ability to adjust the degree of Anti-wheelie and bike stability, will make your learning experience enjoyable rather than brain-damaging.

Related Reading: Do you like dirt in your face? Then cruise over to my review of MXGP: The Official Motocross Videogame, another admirable Milestone creation.

Speaking of brain damage, your custom character will appear to be afflicted with it, judging from his boneheaded facial expression that denotes he just went Number Two in his riding suit. Really, you wouldn’t be kicked from the motorcycle club for claiming that your rider’s various facial models were surgically removed from the PS2 era. Granted, said rider’s face will be concealed within a helmet for most of your journey, and the variety of licensed helmets and gear that you can purchase and adorn are what compose a part of your rider’s identity, which includes his riding posture, a saddled pose that can be tweaked to the most infinitesimal degree. 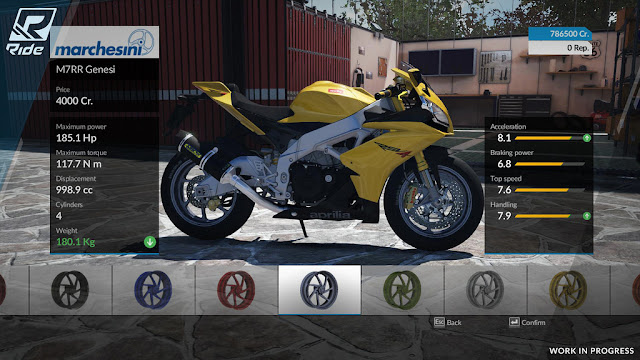 But, let’s be honest, the majority of your identity will be formed by your bikes, the stallions you purchase and upgrade and form relationships with by taunting the sound barrier in one of fifteen locations (that contain up to three different paths per track). These bikes are physically pristine, and perform authentically according to class, although bikes of the same class are nearly indiscernible in how they handle. A completely accurate simulation Ride is not; however, you can certainly perceive the unreal acceleration and top-speed of a Superbike compared to the flawless stability of a Specialised Bike. And these characteristics are made especially apparent after the bikes are upgraded.

It’s unfortunate that the environmental graphics and sound design didn’t receive similar attention. Graphically, everything looks passable while at high speeds, but once you slow down or come to a stop, trees, buildings, and spectators look like static, inorganic props posted on a miniature model set. The actual art design of the tracks, especially the city and country tracks, is eye-catching and facilitates a pleasant racing experience, but the vast contrast in quality between the bikes and the environment is too noticeable to purposely ignore, even if graphical polish isn’t a priority. But as I said, everything looks good, not amazing, while in motion.

Too bad the stars of the raceway, the bikes, don’t sound good or accurate while in motion. This was immediately noticeable when I revved my first bike, a Triumph Street Triple, at the race line. I’ve had the pleasure of riding this beast countless times in my life, and I’ve come close to biting my tongue shifting into second gear out of respect for the jerk of its torque accompanied by a smooth, futuristic roar. The Street Triple in Ride, though, doesn’t even purr. It whirs, as though a microphone and speaker system were placed against a blender set on High Whimper. 25+ hours and 30+ bikes later, I found that every motorcycle’s engine audio resembles, at its best, dual whiskey-fueled leaf blowers and, at its worst, a bronze plated fist jabbing at the crotch of my motorist ideals. I’m not complaining about the absolute inaccuracy of the engine audio; I understand that recording engine growls for 100+ unique bikes would be a lengthy and expensive project. What has me nearly defecating in my leather chaps right beside the bland character models is the absence of all weight, exuberance, and authority that most motorcycle engines demand. This particular shortcoming is something I could never ignore or grow used to. 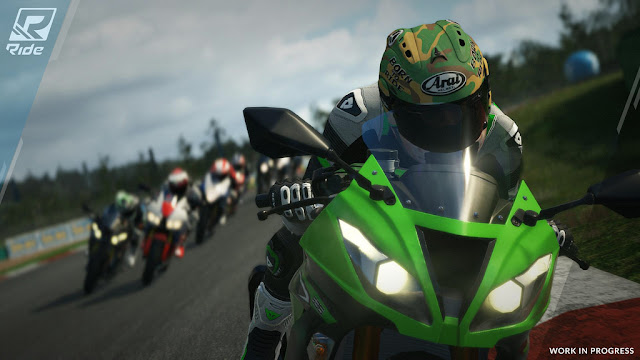 When you first become acquainted with an avid motorcyclist, you can sometimes apprehend from her enthusiasm the exact reason why she loves to ride. In my experience, it’s mostly in the way she describes her bike. If she refers to it as though it were a person or living creature rather than a complex machine, she, like my father, probably appreciates the freedom. If she mentions anything about its speed or the concentration necessary to control it, then she, like me, may be more about the focus. Playing and becoming acquainted with Ride, it’s easy to figure out what the developers appreciate about riding. They love the freedom. They cherish the focus. But mostly, they honor the craftsmanship of motorcycle conceptualisation, and the unique skill it takes to maneuver a bike under pressure. It’s just too bad that the same admiration wasn’t applied to characteristics beyond how the motorcycles look and feel.

Now you can watch the 2015 Hatsune Miku concert from the comfort of your couch!