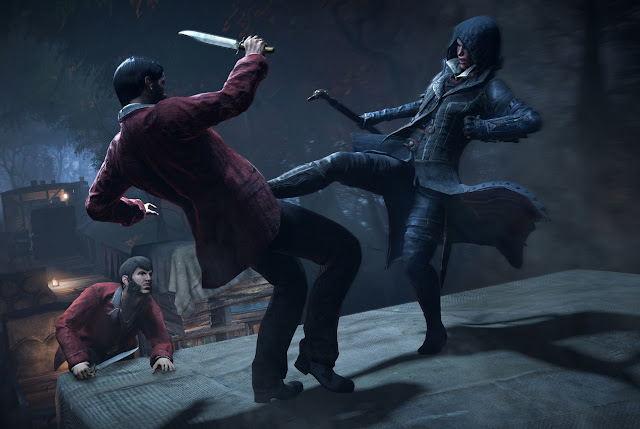 Charles Dickens’ parents, John and Elizabeth Dickens, were fans of the social life; they loved to attend dinners, perform a 19th Century prototype of the now-infamous Stanky Leg at parties, and mix pleasantries with mustache taming advice at family functions. The monetary cost of this lifestyle, combined with the absurd amount of cash it took to support themselves and their eight children, kept the family in unceasing financial instability. But despite this concern, they were a cheerful, congenial, and partially mustachioed family unit.

In 1814, tragedy struck like brass knuckles laced in ipecac when John, a clerk in a navy payroll office whose wage was suddenly dropped down to subsistence level (i.e. an income that provided the bare essentials; or, the minimum income to subsist an imaginary infant in modern times), was arrested and imprisoned for being unable to pay his debts. Concerned for his father and desperate to guarantee his family’s survival, Charles, at age twelve, quit school and reluctantly acquired a job, labeling pots containing a chimney cleaning substance, at a boot-blacking factory, somewhere along the billowing pestilence of the River Thames. So for a year, feeling betrayed and abandoned by parents who should’ve planned and acted for his and his siblings’ best interests, Charles Dickens was a cog on the grinning wheel of industrial child labor.

Charles was no stranger to poverty. He would never forget the influence poverty had on his life. 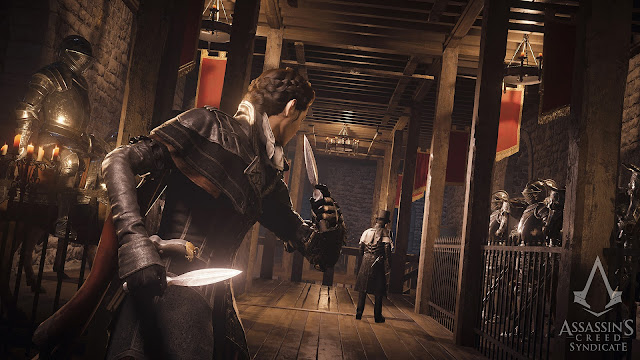 This may be why, in fictional 1868 London, the last years of his prodigious life, he takes such a liking to Jacob and Evie Frye, the twin sibling heroes of Assassin’s Creed Syndicate, so effortlessly and without hesitance; they, on their infinite crusade to discover tools that will help the Assassins outmatch the Templars, are the embodiment of social justice, hooded and bladed humanitarians who have a chance to quell the oppression and exploitation of the laboring poor. He is correct in liking and allowing them to solve his paranormal mysteries. Their skillset, their banter, the relationships they build, and their boundless interactions with a beautifully romanticised Victorian Era London make AC Syndicate a personal yet swashbuckling adventure. I only wish that, like within Dickens’ childhood and his later writings (most notably, Oliver Twist), we were allowed a sometimes more intimate, unromantic view of London, the victims of poverty, and the social causes and consequences of rampant immorality.

In a clandestine sort of way, AC Syndicate is a personal story about loss and the uniqueness of individual grief. Yes, the primary plot involves the megalomaniacal Templar Grand Master Crawford Starrick (a personification of corporate greed whose eerily calm demeanor skillfully suggests concealed menace) utilizing the benefits of corruption, brutality, and a cheap work force to dominate London’s, and eventually the world’s, industry. But it’s the motives, dialogue, and relationships of the primary characters that grant this tale impulse.

Evie and Jacob’s father recently passed away, and this forms a bit of a rift between the siblings. Evie, intelligent and cautious and open-minded, seems to take more after her father from the way she quotes his teachings, and grieves for him by approaching the mission in a way she believes he would suggest – by finding the mysterious Piece of Eden before the Templars do. Jacob, blunt and sarcastic and eager to solve the Templar problem with his blades and fists, however, grieves through recklessness – he aims to forcefully remove each Templar Lieutenant from power with his weaponised wrist, and amass a gang, which he dubs the Rooks (meaning “slum dweller,” I suppose), of the underprivileged to battle the Blighters, the Templar’s ubiquitous organisation of bruisers and criminals. Naturally, Jacob rarely thinks about the ramifications his and his gang’s actions might have on the city, leading him to create more problems than he can silently kill. 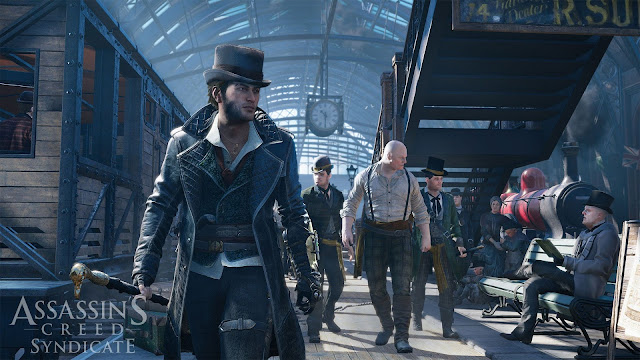 While the story is predictable (but relevant) and has a been-there-done-that vibe glowing through its plot points, it’s the dichotomy between the siblings that drives it and makes each interaction a playful competition between loved ones. Although the dialogue is superb, it’s rarely the things that are said but rather the ways in which the voice actors say them that are the most telling about the twin’s relationship. Jacob, who can’t help but poke fun at his sister for her tactical methodology and cute fascination with the paranormal, has humour and frustration in his tone that insists, no matter what he might say to the contrary, that he holds Evie in the highest esteem. And Evie, in her annoyed admonishments of her brother’s brashness, invokes an unspoken respect for her brother’s skills and willingness to take immediate action. It’s these rhetorical yet emotionally nuanced exchanges, coupled with their repartee amongst celebrity company (especially Aleck Graham Bell), that add a tone of fresh playfulness to the narrative, which greatly contributes to the adventure’s overall memorability.

Notwithstanding Evie and Jacobs admirable, relatable performances, Victorian London is the star around which all aspects of the game encircle and owe respect to. During the Victorian Era, when it came to styles of art, paintings, to be precise, the middle class preferred works that showcased people and society as realistically as possible; however, the upper class had a preference for idealism. They wanted subjects within a painting to appear more gentlemanly than nature and circumstance were willing to allow. AC Syndicate’s London sticks more to the latter, presenting a romantic vision of the first industrialised metropolis that is as breathtaking to gaze upon as it is blissful and thrilling to navigate. Architecture ranging from Neoclassical to Gothic Revival sings in the landscape, and scaling or zip lining from column to cornice is simplified thanks to the new and mostly accurate rope launcher.

But it’s the soundtrack that graces every action, especially exploration, with melodic and thematic relevance. Austin Wintory’s contextually appropriate score, with its assemblage of versatile string and wind instruments, fuses urgency to every fight, desperation to every escape, and serenity to every moment of quiet introspection. What’s most impressive is how the tunes know when to fade in and linger out, giving you a chance to momentarily absorb the sounds of the city – the calm winds, the gossiping citizenry, the inattentive horse-drawn carriages – without distraction. Like the facades of the buildings, the tone and tempo of the music even changes depending on your location, and subtly suggests the stark delineation between the wealthy estates and the slums when transitioning between boroughs. 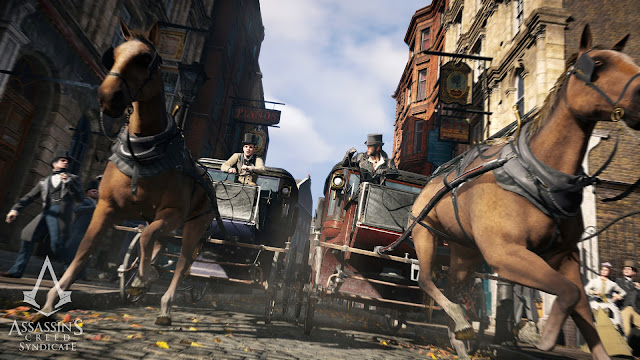 Of course, you’d be better off skinny dipping in the Thames and contracting cholera than free-running into any borough without adequate combat and stealth training. Combat is fast, vicious, and simple, with the twins capable of taking on multiple Blighters at once with slices, counters, and guard breaks. When you pummel or dice numerous enemies’ health down to near-death, Jacob and Evie perform stylish multi-kill takedown, impaling faces and twisting limbs in directions human evolution never intended. It does seem a bit chaotic at first, but there is rhythm to its frenzy. If there’s one aspect that could be improved, it’s the feel of the weapons. There are only three weapon types – knuckle dusters, cane swords, and kukris – and they each handle exactly the same but with different and satisfying attack animations. It would’ve been better if each weapon at least had a unique weightiness to go with the several you can find, craft, and upgrade. Still, the combat is enjoyable because it feels apropos to how an Assassin would actually dispatch her targets – as precisely and efficiently as necessary.

Stealth shares this pertinence of precision and efficiency. The system isn’t incredibly adaptable or loaded with nearly as many neutralisation options and tools as a towering beast like Metal Gear Solid 5. Plus, the enemies’ intelligence can be defined by your ability to whistle them into a chokehold. But like the combat system, it’s fitting to an Assassin’s methods of surprise attacks and espionage. Instead of having a vast collection of anachronistic gadgets, you have knives, darts, and different variations of bombs to disorient or shock (sometimes literally) your opposition. Your greatest tool is the environment, as it can be gratifying just to coordinate your attacks based on the geometry of surrounding architecture. For me, as I had been playing MGS 5 so much that Snake’s sneaking suit was starting to develop a layer of African jungle grease, AC Syndicate’s simpler stealth system and focus on environmental planning was a refreshing change of design philosophies.

The primary characteristics of Victorian literature are the showcasing of the struggles of the working class, and guaranteeing that, in the end, good always triumphs over evil. Dickens was keen on intimately describing the predicaments of the poor in addition to highlighting the flaws of society. AC Syndicate gracefully introduces us to the poor’s plight and (spoiler!) the triumph of the Assassins over the Templars. It even conveys some of the society’s issues, such as greed, the ethics of expediency, and political corruption. Unfortunately, possibly due to AAA game design’s fear of being too vulgar or offensive, Syndicate’s discussion of these issues is never as intimate as it could be. They give us child workers to rescue but never allow for exposition on how they ended up there, a compelling story that should be told. 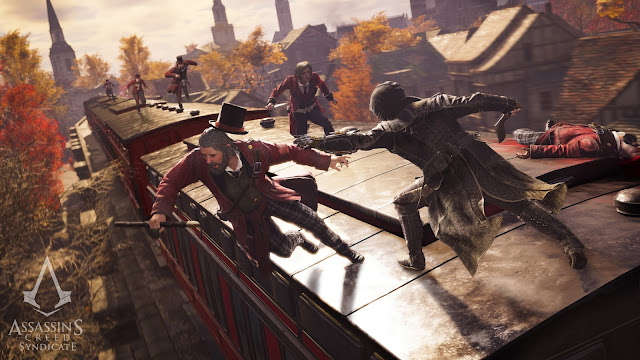 Perhaps the series is better off this way, since the franchise is to history as Indiana Jones is to archeology. It’s meant to be entertaining. And it is. But while others hope for graphical and mechanical innovation in future installments, I’ll be the awkwardly shirtless gentleman suggesting that Ubisoft continues to improve and expand its narrative.

Are you going to purchase Assassin’s Creed: Syndicate?

The key games of November; the flood never abates