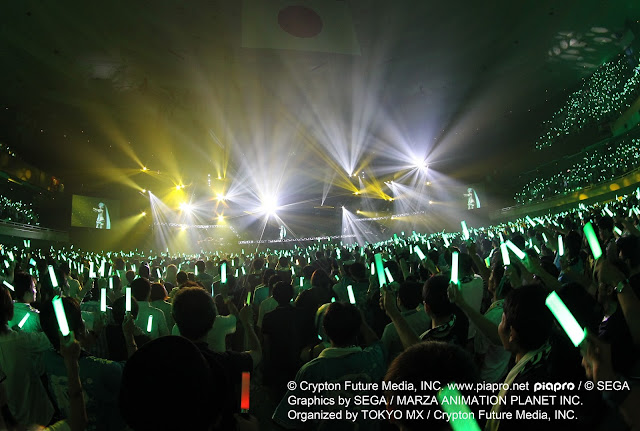 Everyone should go to a Hatsune Miku concert when they visit Japan. I have honestly never had more fun at any event, concert, or experience than I did for those two hours.

I got there early, keen to make sure that under no circumstances whatsoever would I miss even a second of this event, which I had hoped would be one of the absolute highlights from my trip to Japan this year. I figured that it might not be a once in a lifetime event, as I certainly hope I’ll get the opportunity to go to more in the future, but it would fill a gap in something that has become as much of a hobby to me as gaming itself.

So I got there early, and thanks to the efficiency of the Japanese in managing queues, despite being a massive concert hall and many thousands of people lining up to attend the sell-out event, I was sitting in my seat hours before the concert was actually due to begin.

To help pass the time I went and got myself a katsu sandwich and started to ponder what, exactly, a Miku concert would really be like live. After all, this girl doesn’t actually exist, and surely – surely! – even with the best screen and holographic technology on the planet there is no way that this concert could possibly have the same atmosphere and energy of an actual live concert with Lady Gaga or similar on stage. Surely I would be reminded at every moment that I was paying money for literal smoke and mirrors, and surely that would mean a very flat, emotionless kind of concert. 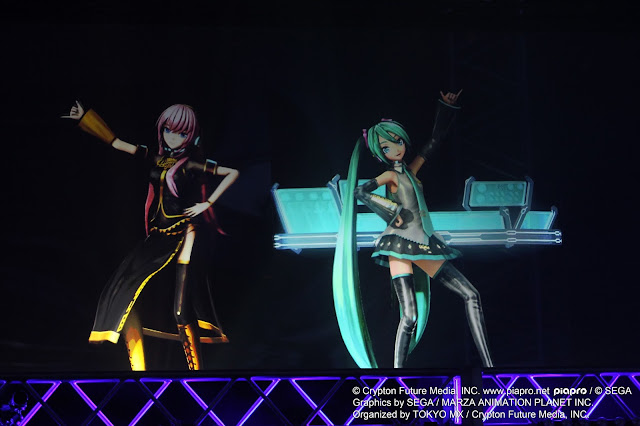 In fact, as the time drew closer to the start of the concert I actually started to worry. This was meant to be the very pinnacle of Hatsune Miku experiences, and if it didn’t live up to my expectations and blow me away well beyond what the games, figurine collection, and so on have achieved, then could this concert have the reverse effect on me to what it should, and the whole vocaloid thing would lose some luster? Or was I over-thinking? Perhaps it was the latter (eating a katsu sandwich does tend to make a person wax philosophical), but I suddenly and genuinely became worried that I had let my expectations for this concert inflate far too much, and I was going to emerge the other side of it having genuinely lost my love of Miku, that concept that in a funny kind of way become very important to me.

The lights dimmed. The chatty crowd hushed, prepared for the event to start. Then the stage lights flashed on, Miku appeared on stage, and the crowd erupted. That’s when I realised that Miku on stage is every bit as real as Lady Gaga.

I mean, you can’t actually reach over and touch Lady Gaga while she’s performing at a concert. Your sensory experience of her is limited to what you hear and see, and the other senses, if they contribute to your experience of a concert in any way, are limited to helping drink in the atmosphere. The smell of the smoke machine. The taste of too-warm water late into the concert because you’re not going to waste time leaving the arena to get a cold bottle. The sensation of sweat dripping down you because concerts are hot places. This is all you taste, feel, and smell at a concert, and of the remaining two senses (sight and hearing), Lady Gaga and Hatsune Miku are much the same experience.

I cannot stress enough just how utterly incredible the technology is that beams Miku onto fully three dimensional screens. She is life-size, detailed and animated to a ridiculous level of detail, and the technology gives her a solid, rounded look that you would expect a normal human to have. As she moves around the stage her hair literally flows. That Lara Croft hair animation that Square Enix was so proud of with Tomb Raider has got nothing on this. When Miku runs, jumps, and comes to a stop she slides the most imperceptible half centimeter further, as a real dancer does when coming to a sudden stop from a leap into the air. Were Miku to look more like a natural human, the concert would have a severe case of the Uncanny Valley going on. Because she’s an anime-like character, however, there’s no risk of that. She’s simply impressively life-like without being human, and it is really unfortunate that photography and video can’t represent just how impressive this effect is on the naked eye, because these shots, as good as they are (provided to DDNet courtesy of Crypton, as I was, understandably, not allowed to bring my own camera in), don’t do her justice. 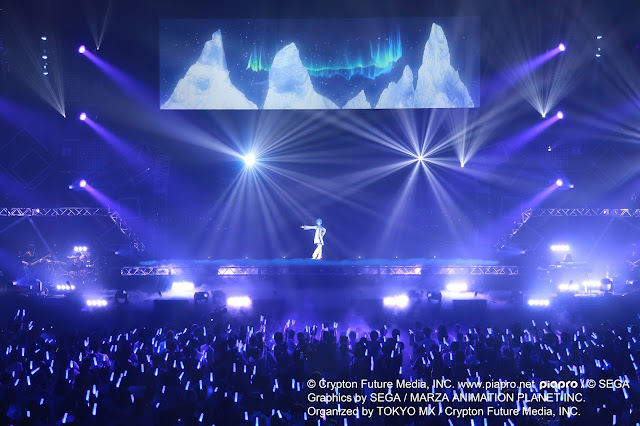 Most people in the crowd had electric glow sticks that could change colour. For the entire concert the entire crowd was pumping these sticks into the air in time with the music, chanting and cheering loudly. When Miku took a break and one of her vocaloid buddies took to the stage, these glow sticks would, en masse, change colour to suit, from Miku’s green to Kaito’s blue, MEIKO’s red, Luka’s pink, and yellow for the twins. Not only was this visually impressive, but it was hugely atmospheric. The crowd was totally sold on the “realness” of these characters, and responded in kind. With an actual real band providing music support it certainly sounded like a real pop concert too, and the designers had a lot of fun with the lighting, too. “Kinetic” doesn’t begin to describe the energy and atmosphere of the place.

Then, as Miku finished her set and walked off for that annoying pretend end of concert trick, the entire crowd also started to chant “Miku, Miku, Miku,” imploring her to come back on stage. When she did, the roar was utterly deafening.

And that’s when I realised that everything I had hoped to experience at this concert really happened. My belief that Miku is destined for genuine global superstardom was validated. For now it’s “just” two dozen or so thousand anime/ game/ otaku fans piling into the arena. But that’s because Miku is new and these of us in the arena are, effectively, early adopters. In the years ahead we are going to see Miku appear before more and more mainstream audiences, on TV, in games beyond the rhythm genre, and her music will slowly scale the charts. More and more “general” fans will pile into the concerts. Miku is going to be so incredibly important to the music industry in the longer term, and it is just awesome that I got to be there as her popularity curve really started to accelerate.

Finally, there is one thing I would like to address, in light of criticism of Miku from certain corners of the games industry that she is “sexualised”. This includes a review that notably argues that the adorably cute and innocent Project Mirai, of all games, was guilty of it. There is nothing sexualised about Miku, either in terms of the concert, or her games. And the overwhelming bulk of her fanbase certainly don’t see her that way. None of the dance moves that Miku performed on stage were even close to, say, Miley Cyrus’ twerking, or the weird stuff that Katy Perry, Lady Gaga, and even Madonna (especially back in the day) get up to. Heck, Miku’s skirt seemed to be weighed down with lead, as even when Miku’s hair was flying about the place as she was bouncing, her skirt remain resolute in not indulging the audience with so much as a quick flash. Crypton has proven over and over again that it has no interest in sexualising Miku, and even censors players of Miku games from being able to tilt the in-game camera to a low position to look up the skirt. 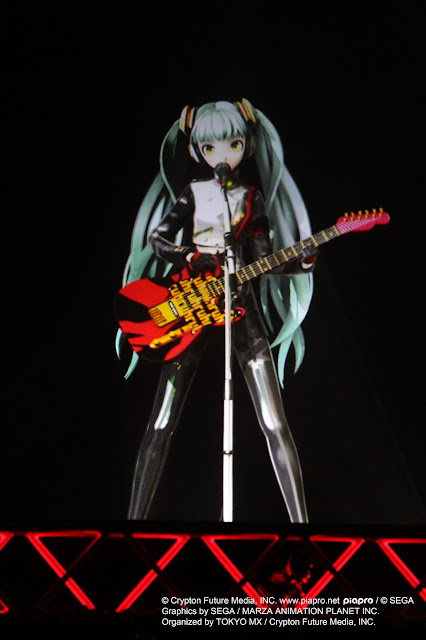 And because Miku is not sexualised, there were little kids running around the arena dressed as Miku. They were with their parents. There were teen girls dressed as Miku. There were fully grown men dressed as Miku (yes, really. They were probably having the best time of everyone there too, good on ’em). People, especially the Japanese, see Miku as kawaii, or cute. That is a very different thing to being “sexy.” The Japanese, and Miku’s growing fan base outside of Japan, do not see her as some seedy, erotic thing, as too many critics guilty of being case studies in research into the Dunning-Krueger Effect constantly and endlessly argue.

Frankly, if you do see Miku as something sexualised, here’s my suggestion to you: have a genuine look at yourself and consider whether the problem is, in fact, Miku and the vocaloids, or the way that you’re looking at the world. Because if you’re looking at this stuff and thinking “sex”, based on the fact that the character is female and wearing a skirt, perhaps you’re the kind of person Nabokov was satirising when he wrote a certain novel…

That unpleasantness (but yet unfortunately necessary) statement aside, I say again: If you ever get the chance, go and see a Hatsune Miku concert. If it doesn’t completely convert you to the wonder that is Mikuhime I will eat my hat.