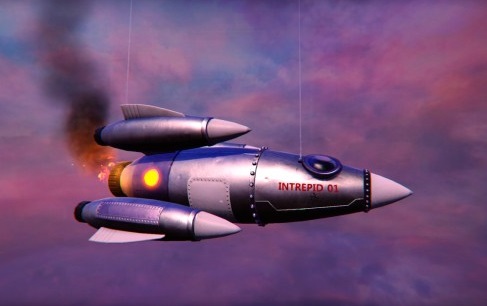 Atlus has published a couple of games by Chilean developer, ACE Team. Rock of Ages was fun, and Abyss Odyssey is a mild classic, and now the dynamic duo are back together for The Deadly Tower Of Monsters.

This game will be an action adventure that looks a little like Diablo, but with all the B-grade horror and sci-fi movie references you could ever want to see in a game. It’s cheesy-deliberately so, and continues with ACE Team’s maverick nature of crossing all kinds of boundaries and themes in its work.

This one might just offer a couple of unique features of its own though. The goal of the game is to climb up a giant tower, which is generic enough, but unlike many other games, here you’re able to see the entirety of the tower as you climb. That also means it’ll be possible to climb up a couple of levels before jumping off the tower to uncover a secret bonus that was previously inaccessible a couple of floors below. A little like a vertical Metriod, if you will.

We’re always up for more ACE Team games, and we love a good Ed Wood film, so The Deadly Tower Of Monsters has immediately jumped ahead to become one of our most anticipated games. It’s coming to PlayStation 4 and PC in fall (spring, for Australians), so it’s not a long wait at that.

In the meantime, enjoy the delightfully produced trailer!