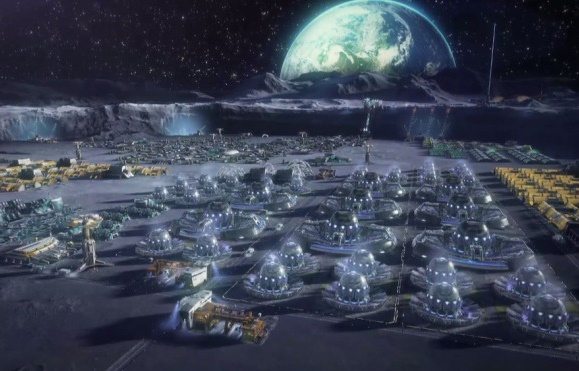 Ubisoft’s E3 show had a lot of Tom Clancy and combat games, but as far as we’re concerned one of the best games that it had to show off was the latest edition of the Anno franchise.

For those who haven’t played the Anno games before, they’re a reliable alternative to the likes of Sim City, Tropico and so on. As with those games you’ll start with a tiny community of people and, by carefully managing resources and making smart investments in new buildings and the like, you’ll be able to grow the city.

There are also technology investments you can make, with new buildings and opportunities opening up as your city develops its scientific credentials. And in Anno 2205 that scientific research means you’ll be able to take to space and colonise the moon.

Where Anno is a little different is that it has an almost puzzle-like structure in place too, where you’ll need to organise buildings into nice little blocks so they can benefit from bouses provided by other buildings such as churches and fire departments. That’s somewhat similar to other city building games, but the range that those special buildings have are traditionally smaller than in other city building games, meaning that you need to use Tetris-like skills to squish everything together.

After a couple of misfires with free-to-play and mobile games, it’s good to see Ubisoft invest in a new “core” Anno game. We don’t know much about this new game yet, in terms of release dates and platforms, but I do hope that Ubisoft takes it to consoles as well. The Anno title on the Nintendo Wii was excellent, and as we’ve recently seen with Tropico on the PlayStation 4, city sims can work on current gen consoles too.

What do you think of this trailer? Let us know in the comments!

Trailer: The Last Guardian is finally happening and we couldn’t be happier