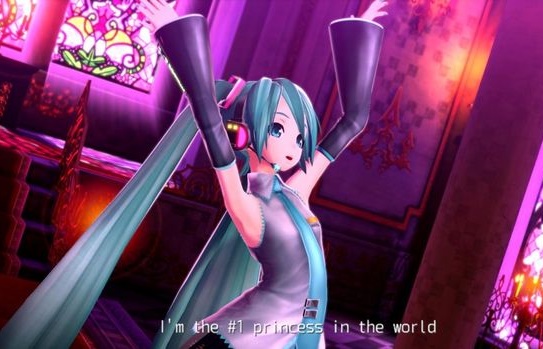 Sega took a demo of a hypothetical Hatsune Miku game with it to E3, to show off the capabilities of Sony’s Project Morpheus. Because it was Hatsune Miku the bulk of the critics ignored it, but of those that tried it, the reports that came back were positive indeed.

I’ve found a video here of the demo – unfortunately no sound (apparently you needed headphones at the show). But you get to see what happened nonetheless. You start in the crowd cheering on as Miku does a little concert, as you would were you at a real Miku concert (oh boy I can’t wait to be at one). Then Miku spots you in the crowd and calls you up on stage (which I suspect won’t happen when I go to the real concert). There she dances around you as you watch, and the crowd around you cheers on, doubt doubt jealous as sin that you’re the one up there.

Then the demo finishes. It’s not a real game, being a tech demo, but nonetheless, its shows all the potential for VR to offer experiences that are fundamentally different to anything else capable with current technology. The PlayStation 4 at the moment could render you a beautiful, detailed Miku, and just like in the Project Diva games, you could tap along to the beat and have a hell of a time.

But could you be in a Miku video clip? No, that’s not possible. Until Morpheus hits, that is.

This demo is also exciting because it makes it clear that Sega has every intention on bringing Miku to the PlayStation 4. Some kind of formal announcement will happen this year, I suspect. Perhaps at Tokyo Game Show.