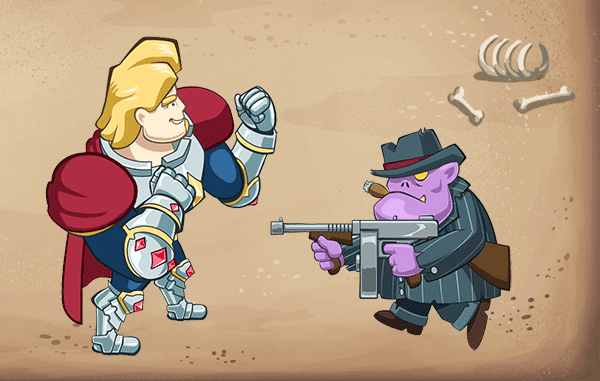 Puuba’s The Weaponographist is apparently the answer to what if the original Legend of Zelda was fused with Smash T.V., with a bit of The Binding of Isaac and added anachronism for good measure. Utilising a simple premise, lightweight gameplay, and balanced challenge, The Weaponographist certainly is different from its loud, chaotic, frenetic, ultra-difficult indie contemporaries. This game has comforted me with the fact that indie games can be both nostalgic throwbacks to the arcade games of yore and be cheerful fun at the right difficulty level so that you can enjoy the game to the very end without popping your veins or snagging handful of hair from your head, at the same time.

The premise of The Weaponographist is that an innocent village has been captured by supernatural forces. When the hapless villagers turn to Doug McGrave (that’s you), a likable jerk stud in shining armor, he refuses to help when he learns that the villagers don’t have anything to pay him for his work. For this, a witch places a curse on McGrave; anything he uses as a weapon will start falling apart in his hands. The game tries to follow the classic idea of a jerk hero through Doug McGrave – but the sparse use of dialogue and practically non-existent character development mean Doug ultimately becomes a lifeless character that you just use as a means to kill the enemies with. The story is not the game’s strongest suit, nor is the writing, but the fun gameplay more than makes it up for that.

As mentioned before, the gameplay is very similar to Smash T.V., in that it is a static-screen multi-directional shooter seen from a top-down perspective. Instead of bombs and pistols, however, your weapons are your fists, arrows, staffs, swords and – as the game progressively shows its anachronistic side the more you play – machine-guns and chainsaws (to name but a very few). The gist is that the more you use your current weapons, the more it starts to deteriorate (due to the curse), so you’re forced collect dropped weapons to increase the ‘health’ of your chosen weapon. Each weapon is unique in its hitting power and strength and favorites are bound to be made along the way. 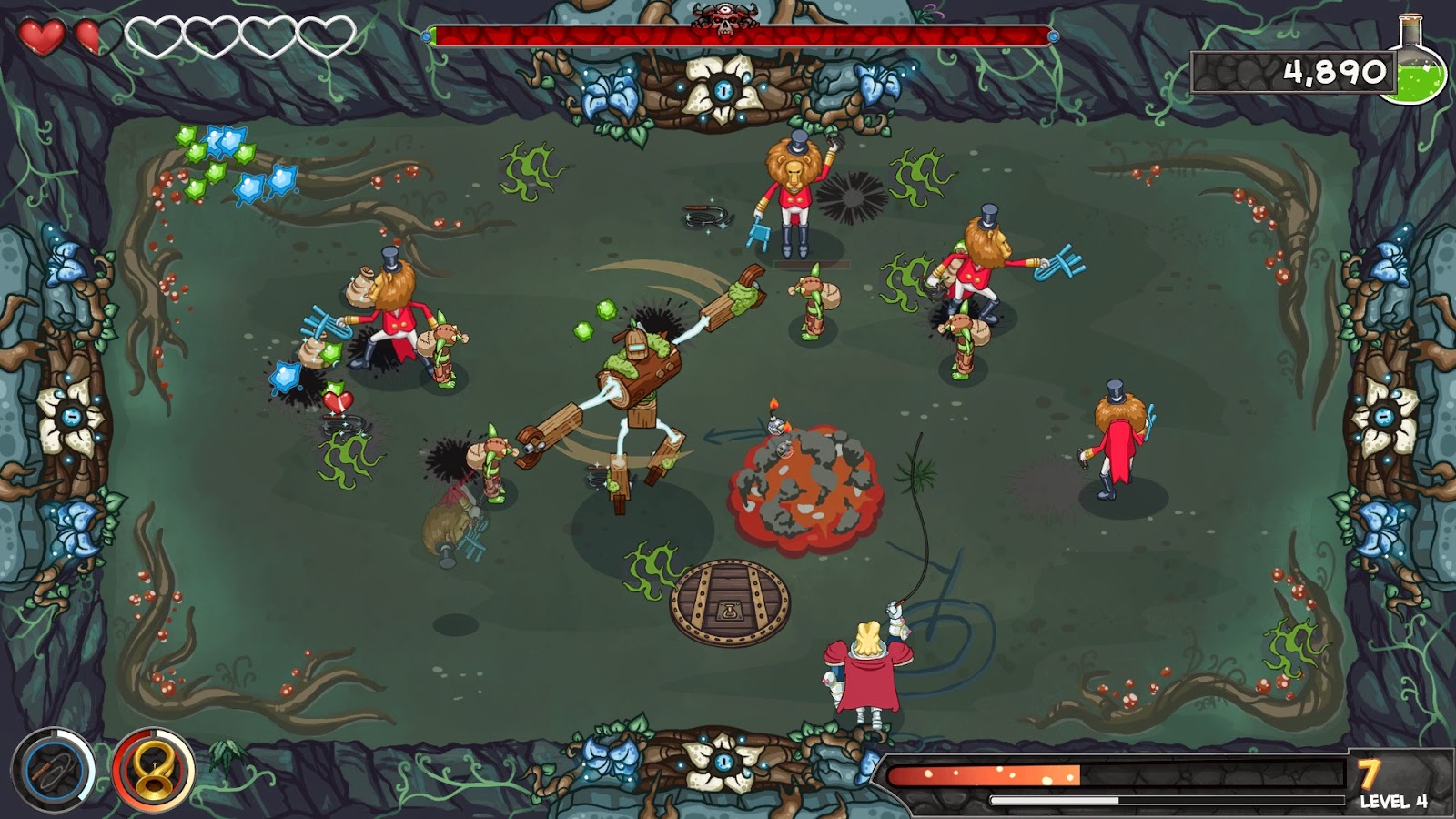 My ideal combination was the ever-revving chainsaw and the ring of fire special that you so abundantly get from fallen mages. The enemies themselves vary from the expected to totally out-of-place (in a good way, of course). Initially you start off with headless swordsmen and jumping red demons. Then, female archers and chainsaw-wielding humanoids who curiously resemble Dad from the indie game Dad ‘n Me join the fray. Once you deal with the thirty-or-so odd respawning enemies, the entrance to the next dungeon opens up, and the game moves forward in a style reminiscent of Legend of Zelda from the NES.

The Weaponographist’s the RPG labelling makes sense in that weapons and specials can be upgraded by collecting green goo from fallen enemies. When you die, you’re revived in the village town, and here you can trade your goo with the villagers to upgrade your weapons or purchase specials like extra health, speed boost and increased hitting power. It’s this easy-to-use upgrading system that makes every death that much more worthwhile and the conquering of the dungeon that caused your demise that much fun. The enemy A.I. is commendable, though there were times where the female archers just stupidly stood there, not doing anything. The machine-gun toting gangsters (yes, you read that right) also behaved erratically a few times here and there, but nothing game-breaking ever occurred from these hiccups. The limited number of frames of animation per character actually look good and hearkens back to the old-school arcade side-scrolling hack ‘n slash games.

The Weaponographist is a solid game to play if you’re ever in the mood to dwindle a few minutes or hours off the boring day you’re having. The pick-up-and-play quality, easy-to-understand nature and lightweight gameplay all come together to make The Weaponographist an easy recommend for everyone.

Ar nosurge is coming to your PlayStation Vita very soon

Digitally Downloaded is up for two awards at the Australian IT Journalism Awards!