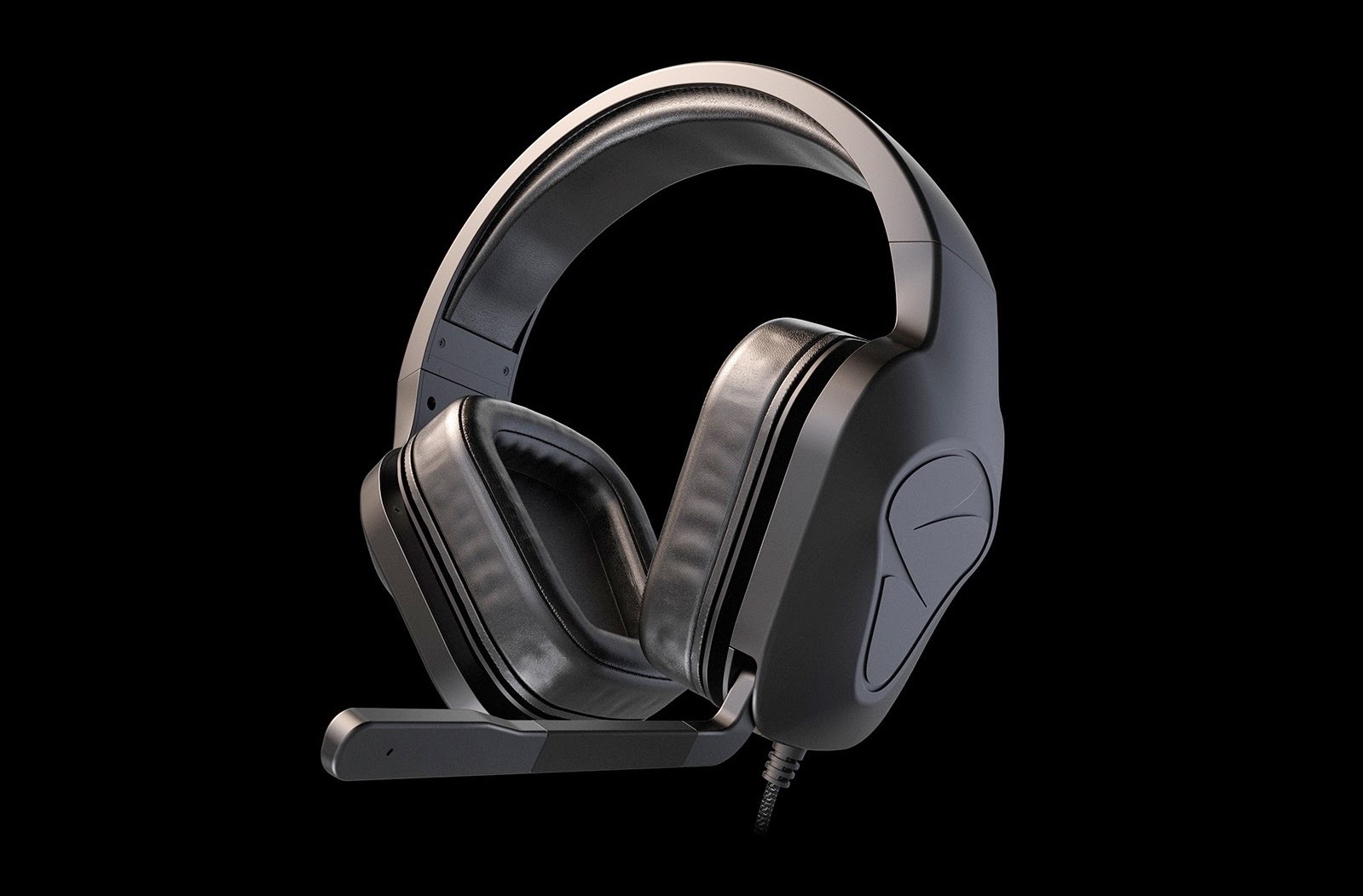 In a day and age when it feels like many hardware makers are churning out version after iterated version of their gear so quickly that yesterday’s peripheral feels outdated half a day later, it is nice to see a company like Mionix taking its time and crafting a smaller number of well-designed accessories that meet specific needs.

The first thing I noticed was how basic the NASH 20 looked. There were no flashing lights – in fact this is not a USB powered headset at all. This is just an analogue headset that ends in a pair of 3.5mm plugs – one for the headset and one for the microphone. Some people prefer this, others demand a USB port, but because there is no option here, it is worth noting. I personally have no preference for PC gaming, but like having a 3.5mm option in case I want to use the headset for something else like my phone, Vita or 3DS.

Not that these are really headphones for ‘audio on the go’. They are large, and chunky-looking in design. The ear pieces are more rectangular in shape than round, with a sturdy, bulky build and a black design. The headset also has a flip-up/flip-down boom microphone attacked to the outside of the leave ear cup. One nice feature to the microphone is that it automatically mutes when set into the raised position, offering a slight audible click as feedback that it is in place and that it is not broken in some way. 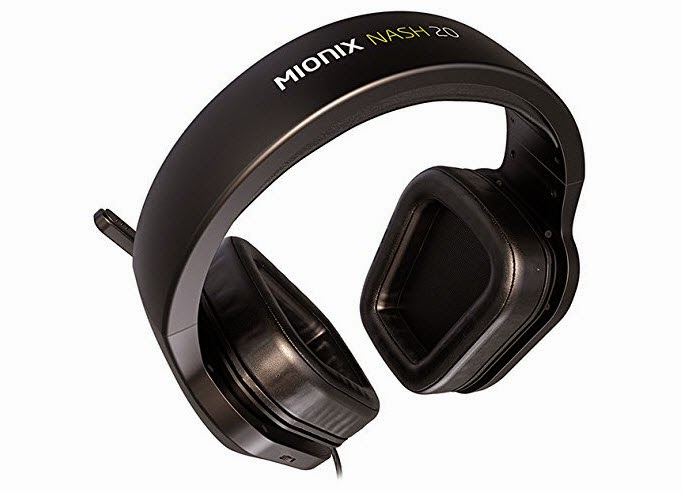 The microphone picks up audio just fine when in the extended position. I was playing online with some friends and all of them said that they could hear me very clearly, though it did seem to pick up background noise just a bit more than I would have liked as well. There is some flexibility near the middle of the rubbery microphone, but not enough to really bend or direct it directly in front of my mouth.

Another small but pleasant mechanical feature on the headset is the volume dial on the back of one of the ear cups. It is small, black, hard to see but ridged and responsive so you can easily dial volume up or down as needed without having to mess with the computer’s audio.

I said that this was not a flashy headset, and I meant it. There are no illuminating ear cups, fancy boxes or switches along the cable or anything else of that nature. The headband is both thick and padded, providing excellent support and durability. It allows you adjust the headset for a more comfortable fit based on the side of your head as well. The aforementioned cable is a thickly braided one that holds up well to use (and me accidentally running over the wire with my computer chair at one point!). There is a rubber-like coating to the headset that feels nice to the touch. The pads have a bit of swivel to them, so they can better accommodate a variety of head shapes and sizes as well. 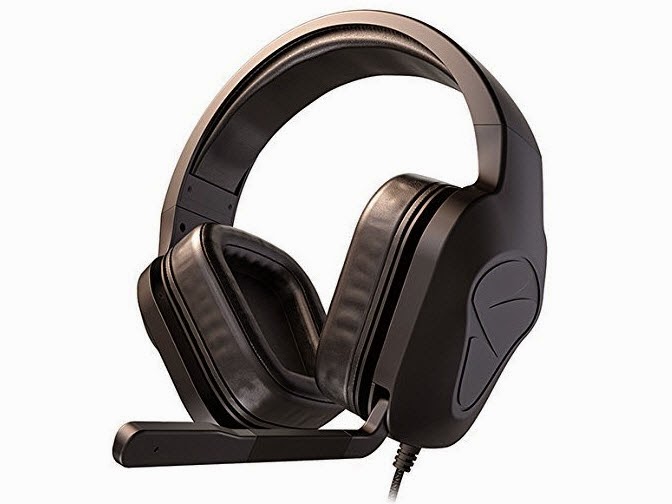 Given just how large these ear cups are, I had concerns about how they would sit on different sized faces. The ridges ran back along my jaw line, but sat just far enough back that they did not apply any pressure there. Still, I had concerns that maybe they would sit oddly on smaller heads (I have the biggest head in my house. I know, I know – insert joke here), so I had my son and my wife try these out. My son is a heavy gamer and is often my test subject when I am looking for a second opinion on how a headset or a mouse fits his hands as he is only sixteen and half my size. He said that these were one of the more comfortable that he had tried, and had no problems wearing them for hours on end. My wife is a more interesting test case because she usually does not bother with headsets. Once she finds a pair that she likes, she sticks with it until they break down. She has had her last set for about three and a half years, but just a couple of weeks ago they broke. She has not liked any of the others I tried to set her up with yet – until now. I think she is planning to keep the NASH 20s which she has been interchanging between her PC and her iPhone as needed.

The pads on the cups is among the most comfortable I have ever worn. These leather wrapped memory foam pads feel like marshmallows on the sides of my head and I was able to wear them for hours without feeling any weight or discomfort. The only complaint I could leverage against them is that because they are over the ear, it can get a little warm in there if you do not take them off and let that part of your head breathe every now and then. That being said, I almost never noticed that despite wearing them for several hours, which is a testament to just how comfortable they were.

The sound quality is also as good as any number of more expensive headphones I have tried in the past. Bass is loud and firm, but not overwhelming. Treble is subtle when it needs to be. Music and movies sounded great and directional audio in games was well represented by the 50 mm neodynium DACT drivers. For better or worse, horror games and FPS are usually the two genres that make the most use out of audio, so I tested these with a handful of games from both genres. Hearing nearby footsteps approaching while sniping absolutely made me feel like I was a part of the action, and some well-placed scratching and wailing sound effects had me thoroughly creeped out in the horror genre.

Much like its Propus 380 gaming surface, the Mionix Nash 20 Headset is more about substance over style. If you can look past only having the analogue plugs and the somewhat chunky style of the headset, what you have here is outstanding audio quality and comfort – which are the two primary aspects I look for when reviewing headsets.

Opinion: On Konami, Silent Hills, and the Dunning-Kruger effect