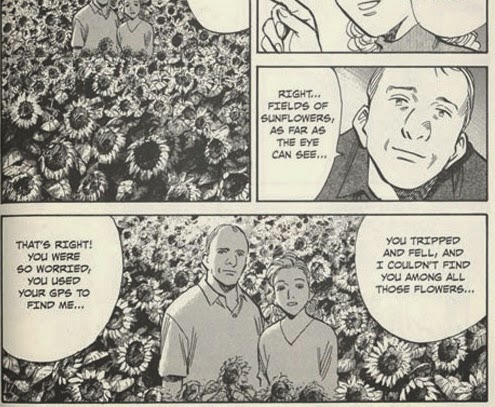 The first volume of Pluto, which Madman Entertainment is currently in the process of re-releasing at the rate of one volume each month, affected me deeply. Racism is something that upsets me quite unlike anything else, so far a manga author to explore the theme to such a raw degree is both profound and a disturbing reflection on modern society.

In Pluto, robotics technology has evolved to the point where robot AI is advanced enough that they are able to move well beyond the uncanny valley and become fully functional members of society. Some become professional wrestlers, others become police. Still others find the time to ponder existential philosophy around emotion and life.

But, as with ethnic minorities in the real world, they’re constantly facing extreme racism and prejudice from humans. A cult, not unlike the KKK, actively works to destroy robots at every opportunity. What’s worse for robots is that an unknown killer is picking off the most advanced of their kind… and no one quite knows who is doing that.

Far from being complete, by the conclusion of the fifth volume, Pluto is still asking more questions than it answers, but it paces revelations just far enough apart to continue to entire readers back for more. Naoki Urasawa (ably assisted by co-author Osamu Tezuka) is one of the finest proponents of pacing in manga, and it’s amazing to sit back and consider how he can design such a dynamic and fast paced narrative, while still taking the time to properly develop characters. 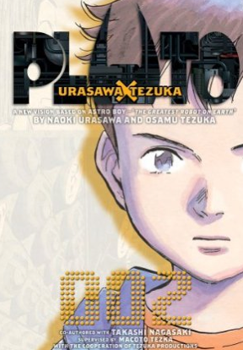 This is important, because if we didn’t care about the characters we obviously wouldn’t care what happens to them, and for the themes around racism to ring profound, we need to care what happens to the robots. It doesn’t take long to realise just how limited the understanding of robot AI is, even among the smartest of humankind. Whether it’s the condensation of humans needing to “protect” robots, the lack of understanding about their capacity for emotion, or the outright hatred, there’s implicit and explicit racism towards robots from all quarters in the world of Pluto, even among those that nominally want to do right by the robots. The KKK-group was easy to pinpoint as the villain, but Urasawa’s genius is in highlighting how the supposed friends of robot detective, Gesicht, are every bit as racist in, for example, feeling entitled to mess with his memories.

The underlying cause of racism is when an individual or group dehumanise another individual or group, and in opting to demonstrate this process through the eyes of a group of people who are not human, but behave humanlike, Urasawa exposes the underlying social, cultural and moral drivers behind those with racist attitudes in a sharply blunt manner. I’ve never seen a better deconstruction on the very root causes of racism in a piece popular entertainment.

It also helps the strength of the story that Urasawa is happy to belong to the same school of narrative thoughts as George R. R. Martin. By that I mean he’s more than happy to spend a great deal of time carefully giving a character a relatable personality and set him/ her up as a major character, only to kill them off with blunt impact. This was important to do in order to give the robots at the centre of the story a sense of mortality and reinforce the basic reality of their humanity, and Urasawa handles this with expertise.

Pluto still has a long way to go, but after the superb start in the first volume, the other opening chapters are escalating the tension masterfully. Even early on, this is clearly a example of how manga can behave like literature.