When I was interviewing for my upcoming book (yes, that was a shameless plug, but it fits), one of the people I was interviewing with, who has extensive experience working in both the Japanese and western games industry said to me “western developers tend to focus on the big show, which the Japanese developers tend to focus on the (more subtle) between the moments of play.”

Pro Evolution Soccer 2015 isn’t developed by a Japanese company, but it is published by a Japanese publisher in Konami. And in comparing it to EA’s FIFA franchise, this difference in philosophy is quite clear.

(Interested to see how we’ve compared FIFA to PES in the past? Check this piece out)

In comparing the two games, I think that the way I prefer to experience the game on a visual level highlights the differences between them. With FIFA I like to play from a side of the field perspective, so that I see something that is not dissimilar to the experience of watching a broadcast. I can see strategies playing out on the field in front of me, and I can admire the brilliance of various players as they cut swathes through an opposition field. But with PES I set the camera to a behind the back perspective. It doesn’t really make sense from a gameplay point of view to do that because it’s harder to get a sense of space around the ball, and difficult to follow what the players behind whatever character you have selected is doing, but I like to do it because there’s a richer and more immediate sense of character to this camera angle. It looks more like it would playing on the field, in other words, and this suits PES’ game more, because it’s not about feats of individual brilliance, or pulling off grand, layered strategies from one end of the field to the other.

Rather, PES is more about the immediate, visceral game. It’s about nailing aa cutting passing game, timing the perfect sliding tackle, or simply watching as the perfect curved kick from distance finds its way into the corner of the net. It’s about appreciating the beauty and subtlety of the beautiful game, and that’s why I do generally prefer this series to FIFA.

But that’s not to say PES is perfect, and indeed in far too many ways it’s still a grating experience, and most of those can by attributed to having a tiny budget compared to its main rival. PES focuses on the regional leagues, which means that there’s nowhere near the same depth in terms of domestic competitions or international competitions as FIFA offers. What’s worse is many of the teams in there are not the official teams – as a Crystal Palace fan, for example, the fact that the only licensed English team is Manchester United is hugely disappointing. EA no doubt enjoys the advantage in the licensing battle thanks to its deep pockets to demand exclusivity, but as the years go on it is disappointing to see PES appear to make no progress with getting real names on board. Even if the English Premier League and the like were not available, the developer should have focused far more on getting leagues that perhaps FIFA doesn’t have – China and Japan have strong leagues in their own right, for example. 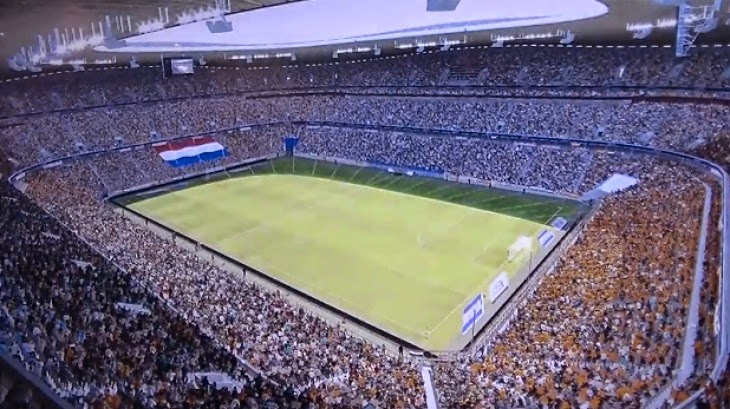 If you can stomach the unofficial names and generic character models, then PES 2015 on the new generation of hardware looks gorgeous. Konami has used this game to debut its Fox Engine to the world, and it’s a good start. There is perhaps not as much fluidity in movements of individuals as we see in FIFA, but the stadiums are gorgeously rendered and the atmosphere from watching the overall game in motion is incredibly authentic. That atmosphere is let down by one of the most bland commentators with the most limited range of comments we’ve seen in a major sports production for some time, but there’s a genuine rush from hearing the crowd wind itself up as a goal gets close.

The difficulty is finely tuned this time around, and certainly a better job than some PES games I’ve played in the last couple of years where the AI goes from a pushover to a nightmare from one level to the next. There’s also plenty of modes and PES does offer a better, cleaner online experience than FIFA, as far as I’m concerned.

I am very happy to see that PES has come onto the new generation of consoles in style, and of a quality that is competitive with a series many times its budget. The world would be worse off without this alternative to FIFA, and without an alternative that presents a different understanding of the sport of football (or soccer, depending on where you are in the world). It might be irritating that there aren’t enough licensed teams, but I do think the football purists will prefer the on-the-pitch action of this game.