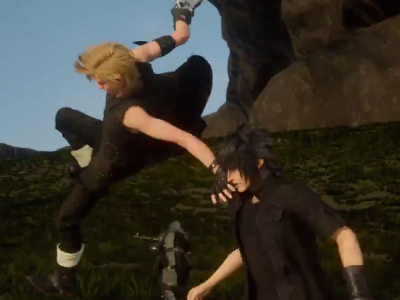 You knew it was coming…eventually. Square-Enix’s Final Fantasy XV has been in development for nearly a decade now, changing platforms and monikers several times over the years. It’s not often we actually get an in-depth look at the game, though, so Tokyo Game Show seems like the perfect place to release some information about the upcoming JRPG. Or at least tease us some more, depending on your point of view.

Rather than further beat the poor horse by drowning you in history lessons or speculating about the game’s cost at this point, though, here’s the trailer that was shown this year. In addition to whetting your appetite it should showcase the fact that the former Versus XIII is indeed a thing that exists.

The decidedly grandiose aesthetics in the video below depict driving scenes, cave exploration, combat, and more. And yes – actual gameplay is interspersed throughout.

“It’s been a long time coming…”
“Almost there.”

What, you wanted a release date? At least there’s going to be a demo next year called “Episode Duscae”.