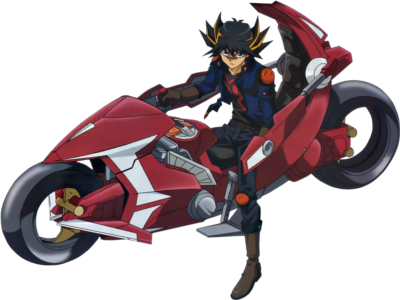 When Konami first unveiled the Yu-Gi-Oh! 5D’s anime back in 2008, it was promptly met by detractors with giggling, condescension, and thorough mockery. The franchise had gone from depicting the story of an ancient pharaoh regaining his memories in modern times to high school students studying card games to…well, card games on motorcycles. Now, 5D’s eventually wound up as a fan favourite thanks to its serious atmosphere and older lead characters, but I’d wager that success can also be attributed to the story’s strong first story arc.
Despite being a manga based loosely on the show however, this version of Yu-Gi-Oh! 5D’s has a surprisingly milquetoastian kickoff. While the anime hastened to build up the post-apocalyptic land of Satellite and its ramifications on the main characters, writer Masahiro Hikokubo elects to dive straight into the most overt element of the battle shounen franchise – card game-based duels.
Yusei Fudo, master of the Duel Monsters card game, and his protégé Sect face off in a Turbo Duel (a version of the game played on a motorized vehicle; it’s only half as silly as it sounds, I swear). The street audience is fairly laid back about the whole ordeal until the match segues into Yusei versus a horsemen-esque skeleton rider.
Regrettably, the latter duel lays bare this manga’s starting issues. Aspects that would be startling such as, y’know, a supernatural being manifesting from thin air to play with trading cards on his noble steed rather than a motorbike have minimal impact when they’re utilised at the beginning of the story and promptly discarded. The brisk synopsis and character chart at the front of the book can only cover so much ground. 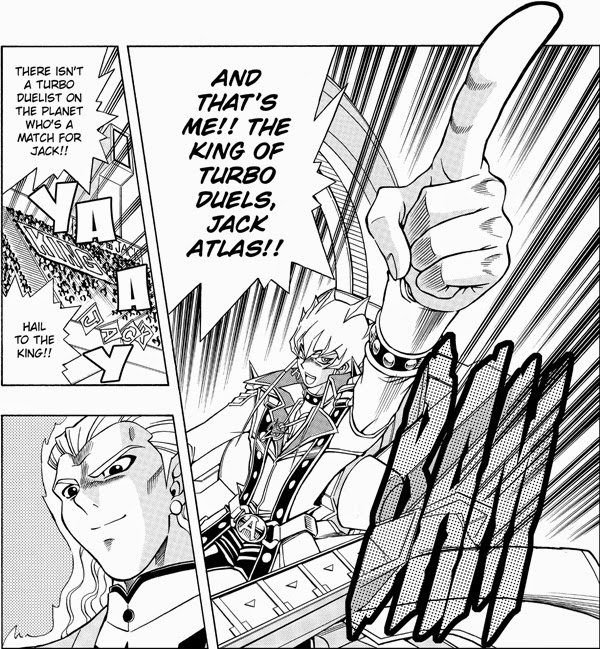 I suppose it’s natural to have a battle shounen manga open hot with some action. After all, if you’re in the target demographic for this series, you’re more than likely aware of the fundamentals surrounding the card game, if not the source material outright, so introducing every element would be patronising to most readers. My beef is that the early chapters rely on that foreknowledge and then subsequently divert from it, which does no one any favours. Even after the first volume concludes, there isn’t a whole ton of basic information to work with.
Underwhelming start aside, though, Hikokubo’s interpretation offers plenty of distinctive twists. Fans of the animated version of 5D’s won’t feel short-changed by reading a direct adaptation because this one introduces numerous new plot points, alters character backgrounds, and is generally its own entity.
Granted, I can’t say I appreciate every change either. This version of Yusei’s archrival, Jack Atlas, comes off more as a caricature villain than a legitimate foil. Another character, Akiza Izinski, was ostracised by nearly everyone in her life to the point of having to create a separate persona to deal with the pain in the anime. Here, she’s instantly respected and idolised by all with nary a hint of the instability or sadism that allowed her character to grow.

I readily give Hikokubo credit for making Izinski a Turbo Duelist from the get-go, though, as this thrusts her character into completely different scenarios. If there’s a silver lining to all the changes, it’s that readers can’t anticipate the outcomes of duels so easily as even the main protagonist is prone to losses this time around.
Speaking of duels again, if there’s anything I enjoy about the manga versions of Yu-Gi-Oh!, it’s that the duels flow rather eloquently. That’s especially true here once again, as duels are succinct and entertaining bouts that still manage to incorporate enough strategy to convince you Yusei is a decent duelist. Sure, they’re not quite as showy as their animated equivalents and rely heavily on exclusive cards fabricated from thin air, but they’re quicker and easier to follow as writers have to compress matches into a couple of chapters that edge around 20 pages each.
The manga edition of 5D’s, though by no means offensive, didn’t blow me away either. Thankfully, it successfully established its individuality and adequate potential lies in these characters to develop for future releases.

DDNet does EGX: The full wrap