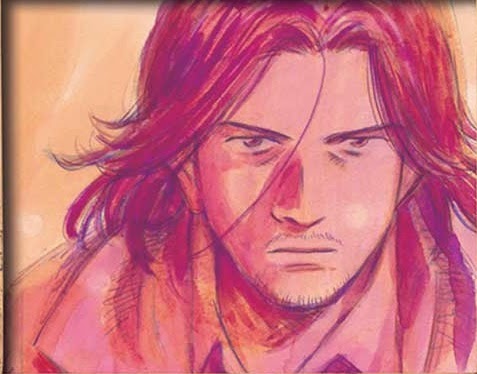 Naoki Urasawa‘s Monster is rarely out of print, and for good reason; if anyone needs proof that the manga form has artistic legitimacy, it is this landmark example of crime fiction.

But in the off chance that you haven’t had the chance to check Monster out yet, a new print has just been released in Australia, so whatever local bookstore you visit should have the first volume for sale again (assuming, of course, that the book store carries manga). Volume 1 contains the first three chapters of what is an incredibly lengthy story, but it’s a tense, effective and dynamic opening that is impossible to put down.

Dr. Kenzō Tenma has a good life. He’s a brain surgeon in good standing working in the town of Düsseldorf, but after choosing to operate on a man called Johan, rather than the mayor of Düsseldorf who also needs urgent treatment because he arrived in the emergency ward later (though expected preferential treatment), his life is ruined. The mayor dies and Tenma loses his social standing… but then people that are discriminating against Tenma start showing up dead and the Johan and his twin sister, Anna, go missing.

The story then jumps forward nine years with Tenma practicing elsewhere… but his past catches up with hm and Monster’s narrative starts in full. Because this is a thriller I won’t give away any further details, but Urasawa offers up a twisting, labyrinthine plot that asks some serious questions of its readers. As with some of his other work (Pluto), Urasawa is a master of pilling ethical conundrums on the reader, and then, in the most brutal fashion possible, forcing them to second guess their own moral compass and how they would react to a given situation.

Because Urasawa’s worlds tend to exist in a state of moral ambivalence, they also tend to be quite dark places where we see the a less pleasant side of humanity than we’d like. Already in the first volume of Monster we get the sense that no one is without guilt, and the few true innocents in his world don’t get to stay that way for long.

And as with Pluto, In Monster Urasawa displayed a love for creating important, interesting characters and then killing them off long before George R. R. Martin had started playing around with the Starks. This is the kind of thriller in which readers will allow themselves to become attached to what should be important characters, only to flip the page eventually to find that one of them is lying dead on the stone cold ground. Manga might not be the ideal platform to explore deeper emotional connections with characters, but Urasawa has done a good job here; flawed as they inevitably are, the various people of Monster are relatable and believable human beings, and each and every time one of them dies it’s a shock.

Monster’s artist uses simple, clean lines to depict both characters and environments. Individual panels are never busy with information, instead drawn expertly to bring the eye to a highlight to emphasise the narrative itself. It’s easy to speed through each page of Monster, taking everything that’s important in without an overload for the eyes, and that’s a good thing. I wish more manga was as clean as this.

More than anything else, Monster’s first volume represents the kind of tight pacing that the entire series would then be renowned for; a truly impressive feat given how long the story is. At 18 volumes in total Monster is a commitment, but after the first volume I’m certain that it’ll be a commitment you’re prepared to take.