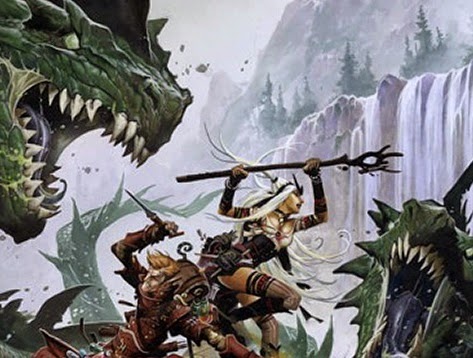 Amongst all the craziness of Gamescom this year (surely a future rival to E3 in terms of importance), there was one little bit of news that we missed but absolutely must report on: RPG legend, Obsidian, has picked up the rights to the brilliant Pathfinder pen-and-paper RPG.

Now for some history: Pathfinder is essentially an enhanced form of Dungeons & Dragons. When Wizards of the Coast published the 3.5 Edition of D & D it also created an “open license” in which any other publisher could use the basic rules for their own game systems.

One such company was Paizo, which at the time was publishing the Dungeon and Dragon hobby magazines. But then Wizards of the Coast released 4th Edition, and it was so different to the Dungeons & Dragons that fans had grown up with that they started looking to other systems and for other games. Paizo, having lost the license to publish Dungeon and Dragon as Wizards of the Coast decided to cease printing magazines in favour of an “all-digital” approach, saw an opportunity. Tweaking the old 3.5 Edition ruleset, the company created Pathfinder.

So popular the system has been that I would not be surprised if Wizards of the Coast went back to this system as the basis of 5th Edition to try and win back some of the mass of customers that the company lost with 4th Edition.

Convoluted, huh? The point is that Pathfinder is an incredible pen-and-paper game with a mass of heritage behind it, and it is truly wonderful that Obsidian as been granted the license to create games in its fantasy world.

The first game that Obsidian is producing for Pathfinder is a mobile card game, which you can read more about here. But there will be more games to come, no doubt. It is worth noting that Obsidian is not working with Goblinworks, a developer that has a separate license with Paizo to produce a Pathfinder MMO.

The Friday 10: My ten favourite games ever