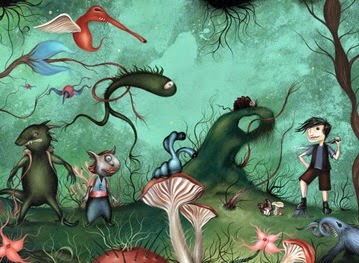 We’ve seen plenty of stories in the past about kids hurling themselves into fantastic adventures in “other worlds.” There’s the obvious examples, such as Alice in Wonderland and The Lion The Witch And The Wardrobe, but it’s a common enough theme that it probably deserves a bookshelf all of its own.

It follows through to film and games as well. Have you seen Pan’s Labyrinth, watched The Neverending Story, or played Papo & Yo? If not, you probably should, because they’re all excellent examples of this theme at play as well.

It’s a popular theme with writers because it taps into something that all young people do: engage with their imagination to create fantasies, and so it’s quite easy to relate to. Anyone who’s had an imaginary friend or given a personality to a favourite doll, teddy bear, or created stories for their LEGO men are essentially doing what the authors of this kind of literature do. At the same time these stories allow the author to delve into some darker themes in an enjoyable kind of way. Most of these stories are coming of age stories, and there’s always an edge of darkness to a coming of age story.

Then we come to Miyuki Miyabi’s Brave Story; a wonderful fantasy adventure staring a boy called Wataru. In every way an average child living in the Japanese equivalent of suburbia, Wataru finds his world torn apart after his parents divorce and then his mother attempts to kill herself.

Seen through the eyes of the child we slowly discover the story that led to such a broken home, but as Wataru pieces things together, he also struggles to cope with the emotional trauma that he is experiencing. And so he finds himself in Vision, a twisted, fantastic and often hostile kind of world where his real fears are manifested in a kind of physical form and he can embark on a quest to literally defeat his demons.

Wataru’s quest requires him to track down five different stones in order to obtain a wish from a Goddess in the Tower of Destiny. These stones are all metaphoric, representing charity, bravery, faith, grace, and the power of darkness and light, and as readers we get to witness Wataru’s premature transition to boy to man as he comes to terms with the meaning of each of these adult concepts. He should be too young to go through his coming of age, but the impact of his parent’s selfish actions (at least, we as readers are led to identify the parents as selfish) means that a young and often ignorant boy is thrown into an adventure he is ill-prepared for.

Brave Story is remarkable, and remarkably well written. Pitched for an audience somewhere between The Lion, The Witch and The Wardrobe and Lord of the Rings, Brave Story doesn’t hold back in depicting the sad circumstances that Wataru has found himself in. It’s relatively rare for a novel of this kind to spend much time in the “real world,” before sending the protagonists on their adventure, but Miyabe’s story calls for a grounding in the depressing realities of the world to contextualise the way the fantasy world works, and so it takes a little while for the actual adventure to begin. With that being said, it’s not a criticism, as Miyabe has paced the story perfectly to keep people interested and the plot moving along while allowing them to build an emotional connection to the events that are going on to Wataru and around him.

The metaphors that run through Brave Story are more explicit than perhaps those of The Lion The Witch And The Wardrobe, and perhaps Miyabe’s moralising is a little heavy handed as a result. While we only see Wataru’s parents from his own eyes and thus it is hardly unsurprising that we’re not led to sympathise with them, the subjective nature of the story in general raises more than a few frustrating questions about what’s really going on around the boy. As a result of this the world of Vision ends up being too contrived for its own good.

This is also minor gripe within the context of a truly wonderful story, however. Brave Story, as the Japanese equivalent of Alice in Wonderland, is every bit as worthy of a read. The translation also deserves a special call out, because it has perfectly captured the poetic flow of the narrative’s structure, and the vivid descriptions of Vision, especially, could not have been easy to bring into English in such a way that they have the same impact on the reader.

Trailer: Watch Bloodborne in action, be reminded of those Souls games

Cubemen 2 has a Wii U release date