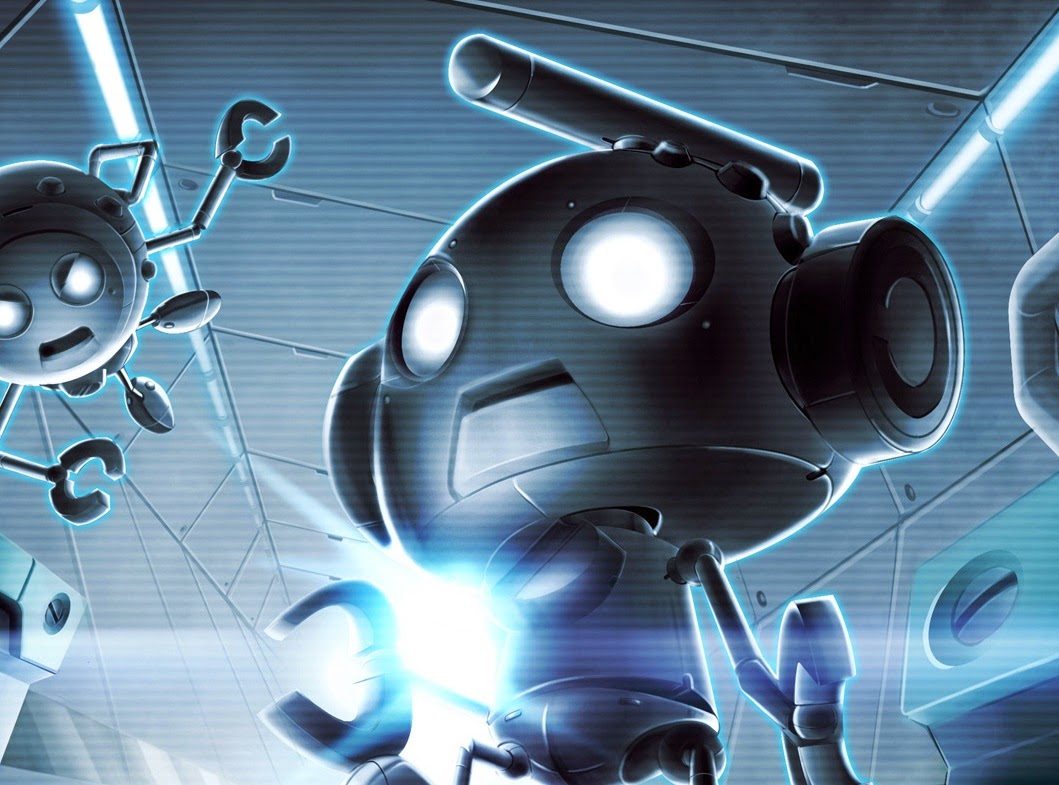 During the second semester of my middle school education, the trite analogy most teachers would barrage their more athletic students with in an attempt to get them excited about understanding pH balances and cellular respiration was the classic, “your brain, it’s like a muscle; the more you use it, the BIGGER it gets, and the smarter YOU get!”

If there is any validity to that statement, then everyone who plays and completes Constant C will develop a brain and head the size of Hugh Jackman’s torso; it’s a fun, abundantly intelligent puzzle platformer. However, like how having a gigantic brain would be a pain to support,  Constant C comes with the minor pains and frustrations of occasional inconsistency.

At the preface to the mind-growing puzzle solving, you ascertain that your little hero is on a desolate space station. Time has stopped; boxes and lamps dangle in a state of stasis. As the frail but determined Emergency Rescue Robot, you meet up with the ship’s A.I. construct; a massive computer monitor with an expressive emoticon for a face who informs you that the only way to figure out what actions led to the station’s barren condition is to collect data tubes. So he hands this little robot a time field, winks at you with, hopefully, well placed faith, and sends you hobbling through the first door and onto your first puzzle.

Now, the time field is a radial sphere that surrounds the little robot’s frame. Any object in stasis that passes through its membrane instantly becomes loyal to the laws of gravity. So to manipulate objects, such as crates and laser beams, which are in stasis and always obstructing your progress, you have to find a way to place the robot in a position where the object can be moved without causing self-injury. But to move the objects in the desired direction, you must become absolutely familiar with the gravity shift ability, which the robot will receive immediately after the first set of levels.

With this ability, pressing square, triangle, and circle rotates the entire level left, 180 degrees, and right, respectively. This offers some amazing options to the puzzle mechanics. For example, when you need to reach a ledge that can’t be accessed by simply rotating the screen 180 degrees, you can hop on a crate, creating downward momentum with said crate that is signified with a blue arrow.  When you jump off the crate, placing it back into stasis, then hit triangle, flipping the level 180 degrees, that crate now has upward momentum, which is again signified by the same blue arrow, meaning that when you jump back on top of it, it will send you soaring up as far as the built up momentum will allow, despite the inversion of gravity.

These two mechanics, the time field and gravity shift, are a genius’s gift to platforming, and a joy to freely play around with, although the latter can be disorientating, causing you to hit the wrong face button mid jump during a moment of airborne suspense.

If any of this sounds slightly confusing, don’t worry; the first twenty or so stages do an excellent job of educating you over the possibilities of the mechanics; nevertheless, once you reach the more mind chaffing stages, a major inconsistency begins to materialize.

Really, your little Emergency Rescue Robot should be named Go-Explode (that’s what I called him). He’s a fragile little droid, which is fine when the laws of mortality are clearly set and consistent. But here, they’re sometimes not. You see, he has a tendency to explode when prior experiences dictate that he shouldn’t. For instance, landing a jump from too high a distance will, naturally, make him explode. So by the process of experimentation, you jump from different heights to find out his exact go-explode threshold, and you use this as your frame of reference from then on.
But for some reason, toward the midway point, the little android urinates oil all on the chest of your go-explode threshold, and he begins exploding from falling distances that will urge you into screeching, “oh c’mon! That wasn’t even that high!” This is especially troublesome when you’re shifting gravity mid-jump, thinking, “He shouldn’t explode when I make this jummmmm – AIEEEEEEE”

And he doesn’t just explode; his horizontally oblong head jettisons off his wiry framework like a suicidal co-pilot, which actually does alleviate rage or frustration with (possibly) intentional humour.

And this brings me to another minor issue: slowdown. It happens occasionally in the later levels, when more busywork is occurring on screen, but it’s nothing to go explode over.

With these annoying but manageable flaws out of the way, it must be said, the story, though seemingly as barren as the setting for the first few hours, is a charmer. You’ll need to collect the majority of the data tubes to find reward in its surprising sense of urgency and theme of sacrifice. It took me around 10-12 hours to collect all of the tubes, and I was offered a fulfilment similar to scoring the highest possible mark on an exam conducted by a notoriously difficult (and crabby) professor.

Constant C is a puzzle game that will frustrate you with its inconsistencies. You will scream toward the vaulted ceiling after your little rescue bot perpetually explodes as though any pressure to his feet triggers his self-destruct sequence. But you will also rejoice every time you defeat a puzzle with your patience and brilliance, and that makes what frustrations there can be definitely worth the effort.