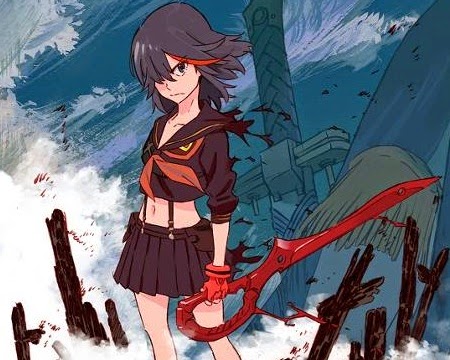 It’s safe to say Kill la Kill stirred up the anime community when the anime began airing in late 2013, gathering loyal fans and leaving others revolted. It wasn’t simply polarising in terms of quality either; the show spawned plenty of debates about its female heroines (and inevitably led to some cosplay that pushed the boundaries of what constitutes acceptable wear at conventions).

Kill la Kill is now due for an English dub, courtesy of Aniplex of America. Whether you never had the inclination to check it out before or simply don’t fancy English subtitles, here’s another way to watch the show.
The trailer below features a solid three minutes or so with the voices of various characters:
The cast is as follows:
Erica Mendez as Ryuuko Matoi
Carrie Keranen as Satsuki Kiryuuin
Christine Marie Cabanos as Mako Mankanshoku
David Vincent as Senketsu
Matthew Mercer as Aikurō Mikisugi
Sarah Williams as Nonon Jakuzure
Patrick Seitz as Ira Gamagōri
Grant George as Uzu Sanageyama
Steve Cannon as Hōka Inumuta
Lindsey Eaton as Mataro Mankanshoku
Michael Sorich as Barazo Mankanshoku
Erika Harlacher as Sukuyo Mankanshoku
Todd Haberkorn as Shiro Iori
The first four episodes of the English dub will be available on DVD and Blu-Ray when Kill la Kill Volume 1 releases on July 15th. If you’re among the crowd that finds English dubs to be poor compared to their native languages, the same set will include Japanese voices as well.
– Clark A.
Anime Editor
Email me at: clarka@digitallydownloaded.net
Share this