Simplicity can be both a good and a bad thing. At the best of times, simplicity makes a game feel second nature, and at the worst the game becomes tiresome all too soon. And Pulstar is an example of the latter. Billing itself as a twin stick shooter with the nonsense removed (an odd claim, since the shooter genre really didn’t have much nonsense to begin with), Pulstar starts with predictable gameplay and finishes in about as much time as it’ll take you to read this review.

No, really. You could feasibly see all the content this game has to offer in five minutes.

Gameplay wise, Pulstar is all you would expect from the twin stick genre. You control a glimmer of light defending a dying star from invading aliens. This is done by moving around on a rectangular arena and shooting everything that moves. It’s by no means revolutionary gameplay, but there’s a distinct universality about the setup which is precisely what made predecessors like Geometry Wars so popular.

There are only three types of enemies in Pulstar, all of which are available from the very beginning. There are space octopi which try to ram the player’s avatar, space sea slugs which shoot projectiles and what appear to be demon-possessed car tyres which split into three parts on death. As with many arcade classics, spawning is random and the game intensifies until around the 3:30 mark at which point too many enemies spawn for the player to feasibly deal with. 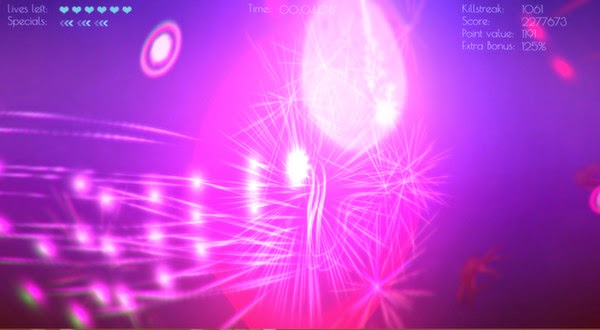 Enemies aren’t the only department lacking in variety either, as the dying star’s defender only has one type of weapon, with powerups instead increasing score, life or multiplier. The game tracks your kills and awards a special weapon upon 400. Said special weapon is not a screen-clearing smart bomb but rather a profoundly less useful time warp which slows down the action significantly. It does take a while to kick in however, so its value in a pinch is diminished.

Pulstar is the first Steam venture from Dutch indie outfit Concave Studio, but unfortunately it lacks the drive and ambition which is easily associated with the more prolific indie releases as of late. Concave have made a game which, while it isn’t broken by any means, just barely meets the tenets of its genre and rarely aims to go past that. In being no-nonsense, Pulstar also throws away its sense of individuality and its lasting appeal, making it a hard sell unless more content is added in the future.