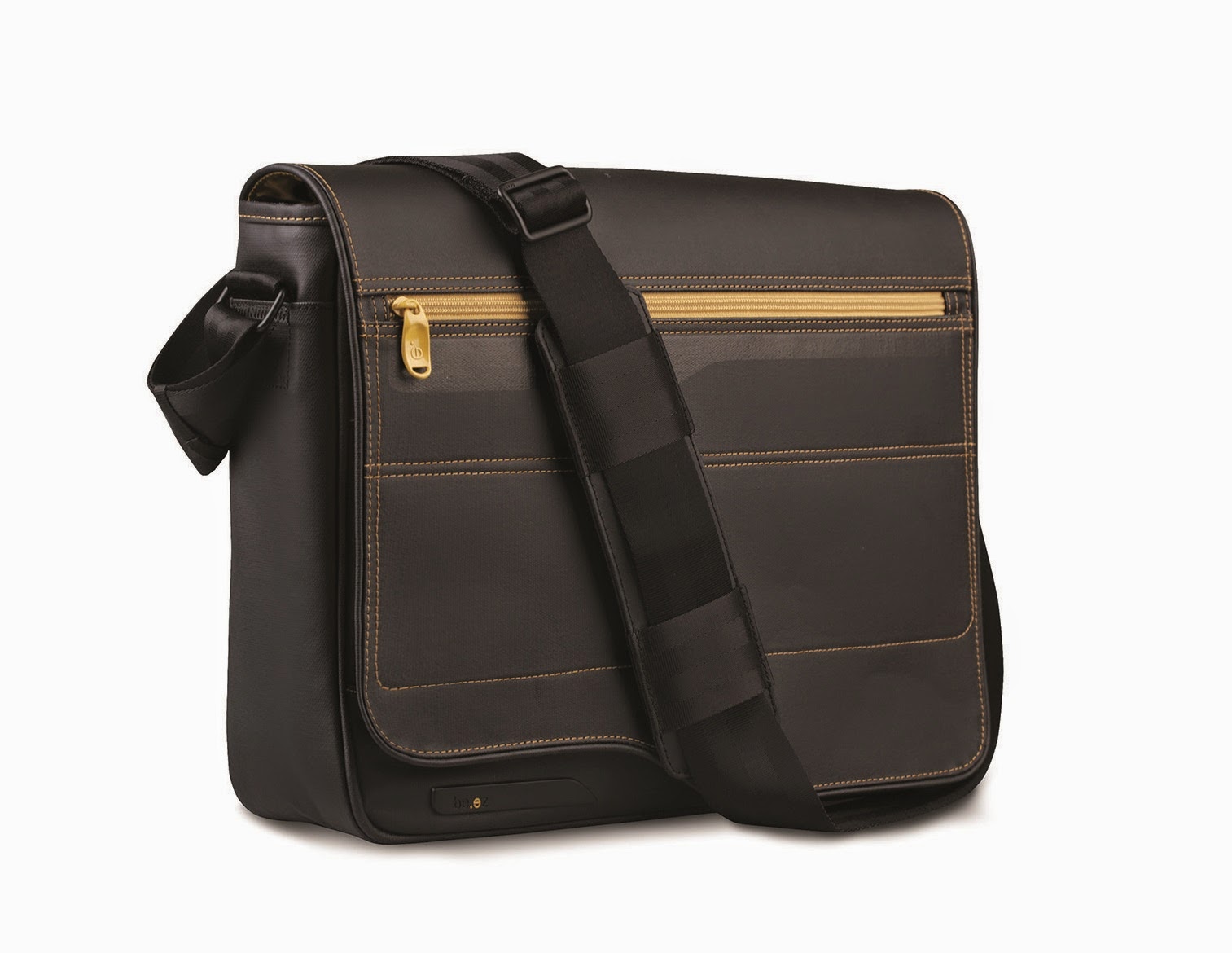 Today, I’d like to talk about an insidious evil that threatens our very society. It’s all around us. It’s on the bus, on the train, in the fields, on the beach. It starts slowly, with a scuff or a scratch. Left unchecked, it spreads rapidly, leaving a ravaged trail of cracked screens and broken hinges in its wake. Its name is Gadget Neglect, and it’s everywhere. Don’t be a victim.

The be.ez (‘be easy’) LE Reporter can help. Part fashion accessory and part laptop bag, it’s made from top-quality materials and promises to make Gadget Neglect a thing of the past. Even so, it helps if your gadget wears an Apple logo. The Reporter is designed around the 11” Macbook Air or the 13” or 15” MacBook Pro, but owners of other devices may still find that they’re able to take advantage of the bag’s many protective features.

The LE Reporter’s primary defence comes in the form of a waterproof outer shell. Although this is a soft-sided bag, the tough, PVC-coated canvas adds a fair amount of rigidity and gives the bag a stylish look. Decoration is minimal but classy, with an Apple-inspired tapered finish, high-quality zips and contrasting interior linings. An up-and-over flap keeps everything in place, and masses of Velcro minimise the chances of an embarrassing spillage. The final weapon in the Reporter’s arsenal is a thick nylon strap that looks sturdy enough to double as a crash-test harness. It’s just a shame that there’s no top-mounted handle, which would have added extra versatility, albeit at the expense of those sleek, sleek lines. 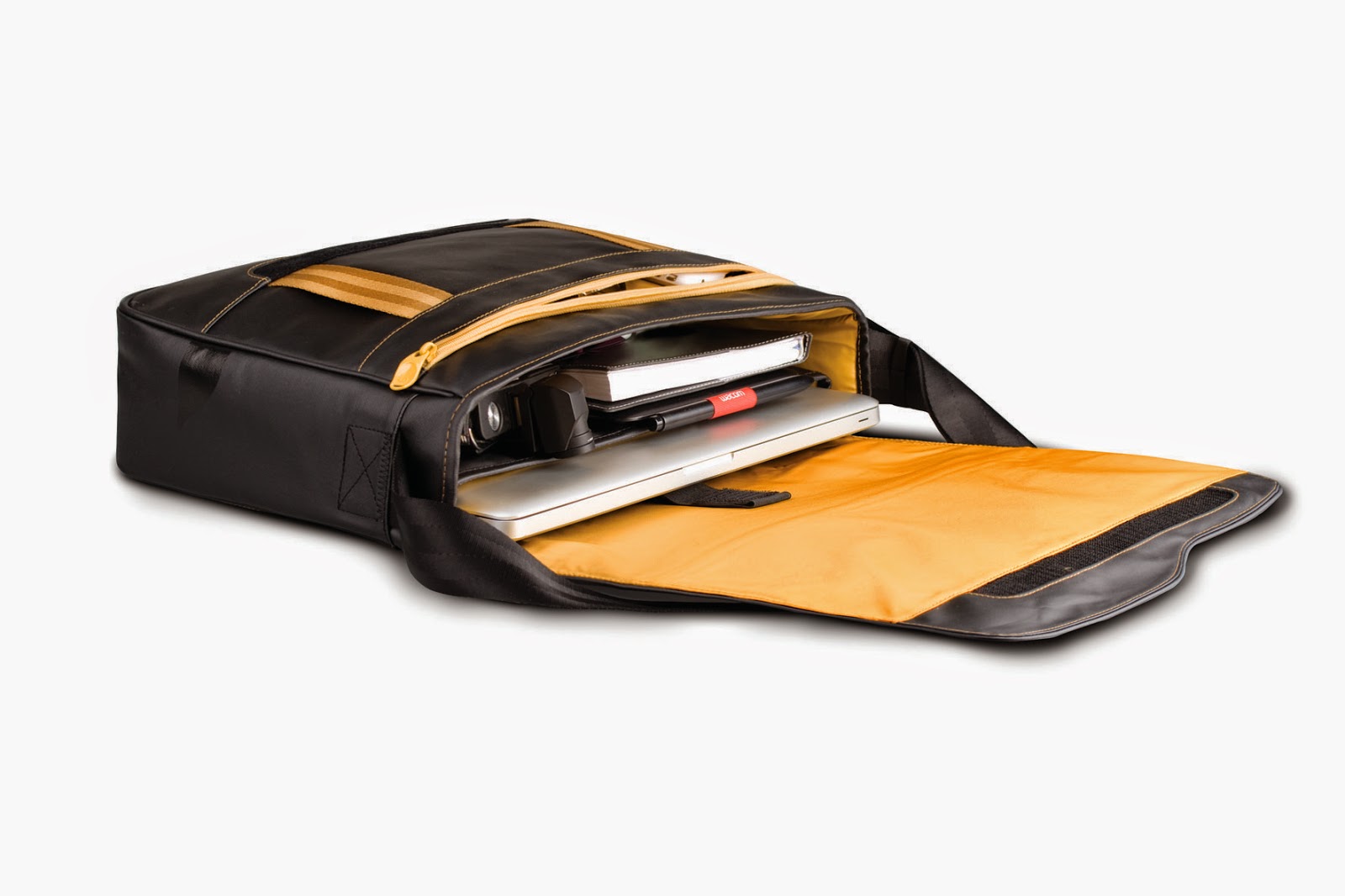 Shall we talk pockets? The Reporter has loads of them. With the bag closed, there’s access to a magazine-sized pouch on the rear of the case and a half-sized pocket on the front. Open things up and your options multiply. In addition to the main section, the largest bag has ten smaller compartments in sizes ranging from capacious to dinky. Most impressive is the laptop caddy itself. It’s secured with a Velcro tab, and is elevated from the bottom of the bag so that an accidental drop means that it’s not your precious Mac that hits the floor first. It’s not bombproof, but it should be enough to protect against everyday knocks and scrapes.

There are a couple of areas where the design could be improved. A handle, obviously. Every bag needs a handle. Also, the device caddy suffers from being a little too small for a standard 15.6” laptop; a couple of extra centimetres would have made the Reporter useful for non Mac-owners, too. Finally, the main compartment could use a zip, as the up-and-over flap means that there’s a slight chance that ultra-determined rain could get in at the sides.

Despite this, the be.ez Reporter is a very good bag. It’s stylish, great quality, and well worth the asking price. It’s one in the eye for Gadget Neglect, and a fine choice for Mac owners on the move.