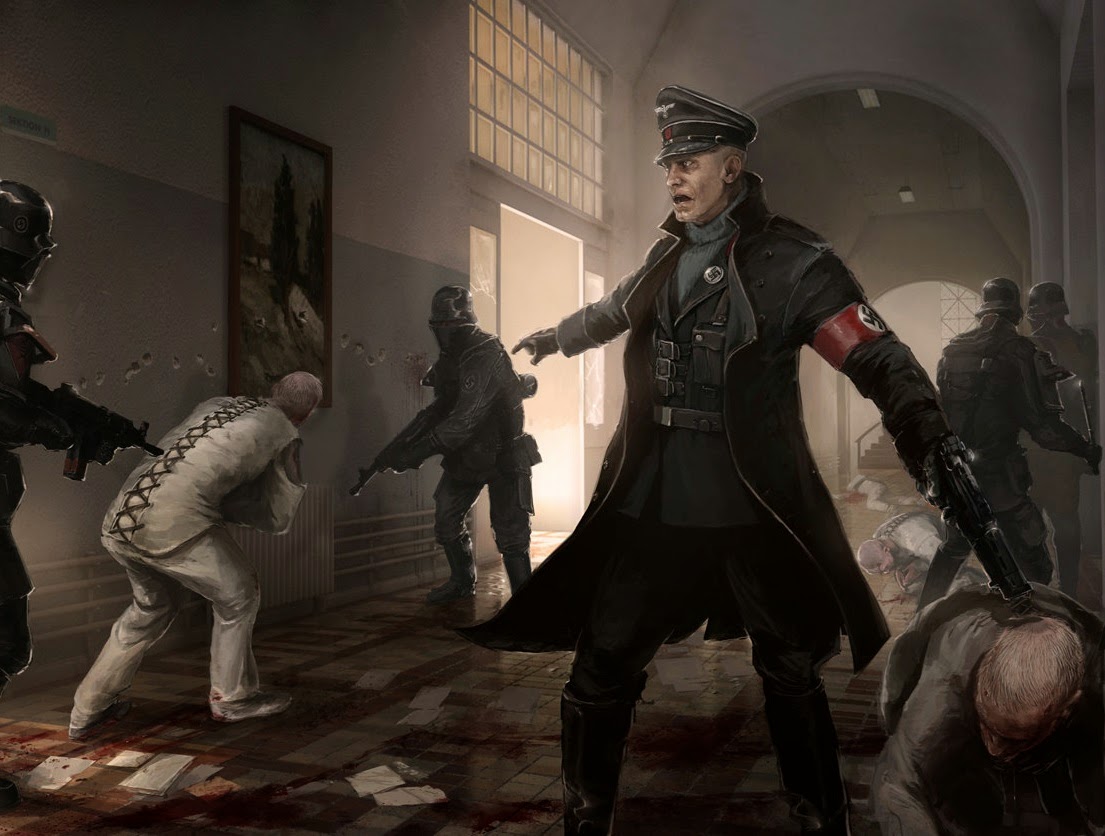 I’m surprised that Wolfenstein: The New Order ever saw the light of day. Not only is it an entry in a fairly low-key series (let’s be honest, the Wolfenstein franchise has lost much of its importance over the last few years), but it’s a narrative-focused single-player-only first person shooter, a bit of a rarity in a genre that tends to focus on multiplayer shootouts in order to provide some replay value.

And yet, against all odds, Wolfenstein: The New Order manages to succeed where others have failed. The mishmash of alternate history, science fiction, human drama, and both old and new shooter mechanics might seem like the game is overstepping its bounds, but Machine Games’ debut title is greater than the sum of its (many) parts.

The New Order puts you back in the shoes of B.J. Blazkowicz, a man who has spent much of his life taking out members of the Third Reich. The game opens in 1946, as Allied forces conduct a raid on a German castle, in a Hail Mary attempt to take out General Wilhelm “Deathshead” Strasse, the Nazi head scientist whose creations could spell doom for the rest of the world. This opening scene, in many ways, echoes the style of military shooters from the past few years. There are a handful of contextualised button presses to get things moving, and a couple on-rails segments that ease you into the action, as Blazkowicz and his team attempt to raid the castle, in a somewhat over-the-top fashion. It’s arguably the ‘worst’ part of the game, but a necessary one, as it allows the developers to set up the rest of the game, which is noticeably different from the opening level. 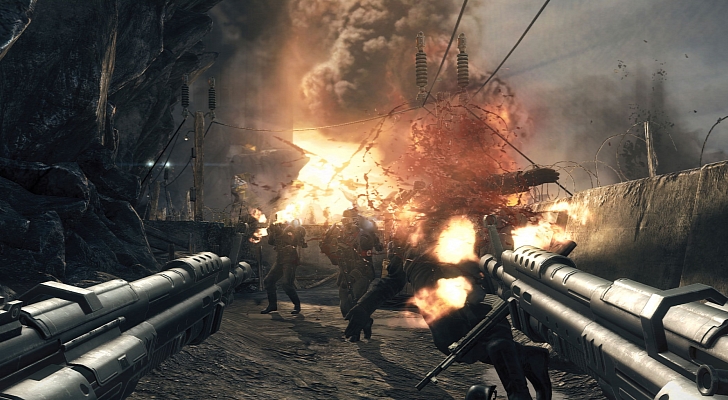 It’s fitting then that this opening mission ends in failure; Deathshead manages to elude his capture and execution, and while Blazkowicz and his ragtag band of brothers are attempting to escape, Blazkowicz himself suffers a debilitating head injury, leaving him in a vegetative stage for the next 14 years. He eventually awakens in 1960, to a world that is ruled by the Nazis, who have not only won the war, but have quashed most of the resistance through extreme measures, including nuclear warfare. Unsurprisingly, Blazkowicz springs out of his semi-comatose state as a team of Nazi soldiers begin to shut down the asylum he is being treated at, as they proceed to quickly kill not only all the patients, but the owners and staff that run it.

This ‘what if’, alternate history isn’t just a convenient backdrop against which much of the action is set, however. Rather, it provides the developers the opportunity to explore and expound upon the world and its characters, with a level of depth that is new to the series, which has largely focused on action (and mostly action) in its previous entries. Despite his three-dimensional model and the ability to talk, Blazkowicz is largely the same character we controlled back in the 2D days of Wolfenstein 3D (don’t worry, I know the contradiction there, I’m getting to that).

As previously mentioned, Blazkowicz’ identity has largely been formed by his ability to follow orders and, well, kill Nazis. It’s a role that has suited him well in the past, but in a post-World War II era that sees his home country essentially destroyed, Blazkowicz is largely a man out of place and time. Between action-packed scenes, he wastes no time pondering his purpose in a time of war, how his world has changed around him, and more importantly, how a man like himself would live his life when this is all said and done. It’s an interesting direction in which to take the character, and one that I largely commend Machine Games for.

As much as the game focuses on action, it never forgets the suffering and decay of those both on and off the battlefield. As easy as it would have been to have Blazkowicz tackle the game alone, or at the very least, with a group of fighters with way too much testosterone and machismo, The New Order portrays characters from all walks of life, whose suffering at the hands of their Nazi overlords presents a more somber setting than the gung-ho antics of a typical FPS. Soldiers continuing to fight for what they believe in, doctors who are forced to compromise the well-being and safety of their patients, prisoners being forced into slavery at Nazi work camp; it’s a fleshed out world here. There are also a handful of supporting characters, though the most notable include an ex-Nazi named Klaus, Caroline Becker (a resistance leader who made in appearance in 2009’s Wolfenstein), and Frau Engel, a Nazi leader whose personality and demeanor is reminiscent of Christoph Waltz’s character, Hans Landa, from Tarantino’s Inglorious Bastards.

The entire cast is strong, representing strong men and women from different races and backgrounds, and it’s all brought together by a lovingly realised world, a strange mix of retro-futurism and world domination. Outdated methods of communication and black-and-white monitors are thrown right up against robotic soldiers and space travel, to the point where the entire game feels both surreal yet oddly horrifying. Small touches and window dressing complements the environments and artwork; there are always optional cutscenes and conversations to be found, and collectibles that fill out biographical data or background information around the world. Considering Machine Games was founded by ex-Starbreeze developers (the team that worked on both The Chronicles of Riddick: Escape from Butcher Bay and The Darkness), it’s easy to see where the inspiration comes from.

This freedom and sense of choice finds its way into the gameplay itself, which might seem odd for a franchise that prides itself on the old-school style of running and gunning that it built its name off of. The New Order eschews many of the common systems seen in shooters from the past decade; a two-weapon limit is instead replaced by a well-rounded suite of firearms and handheld weapons that almost all feature dual wielding and additional firing modes and attachments. Health doesn’t rebound fully either, instead putting an emphasis on scavenging for health kits and pieces of armor for protection. 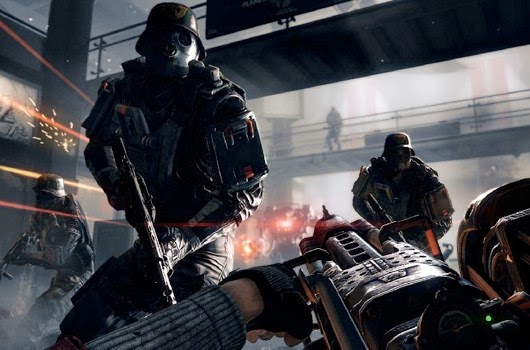 Modern gaming sensibilities are present however, most notably the option to use stealth rather than brute force. You gain control of both a silenced pistol and a knife at the beginning of the game, allowing you to eliminate enemies without drawing attention to yourself. This is useful not only in more open levels, where it’s easier to pick off enemies one by one, but it allows you to proceed through a level without raising an alarm. You see, some areas are patrolled and overseen by Nazi commanders, who have the ability to call in reinforcements should they spot you (or hear your gunfire). While there is no radar or mini-map, the game does tell you how far away you are from these commanders, giving you the option to eliminate these high-priority targets first.

Hidden secrets, a staple of the series, also make a return, some of which require more patience and puzzle solving than simply tapping on a specific section of a wall, or pulling a hidden switch. Some of these secrets and collectibles are tied to a player decision during the game’s first mission, which either gives you the ability to either hotwire or lock pick, providing some incentive to replay the game a second time to see how things are different depending on said early game decision (which I won’t spoil). Still, the campaign clocks in at around 15 hours, a more than respectable length for the story mode in the modern FPS.

Machine Games has taken an aged franchise and brought it into the current world of gaming, yet they’ve done so without compromising the core tenets that are at the heart of Wolfenstein’s identity. As competent as it is a shooter, The New Order elevates itself from your standard run-and-gun action game by crafting a world that is actually worth caring about, and it’s done so with a level of confidence that is worthy of commendation.