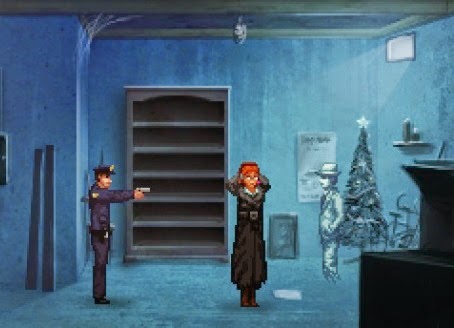 The Blackwell series started back in 2006 is a point and click paranormal murder mystery. In preparation for the final chapter of the series that has just been released I also played the first four. You could say I’m Blackwelled out.

The series for the most part follows the story of an independent writer Rosa (Rosangela Blackwell) and the ghost Joey Mallone as they work together to put spirits to rest. There is a slight break in time as the second chapter is a prequel to the events of the first where you play as Rosa’s Aunt Lauren as she and Joey set about doing the same thing. There is a catch though in all of the storylines; the spirits that you need to put to rest, don’t know they are dead. It’s up to you to make them realise that they are no longer alive to put them to their eternal rest.

(Wait, hang on, no M Night Shyamalan joke there, Pierre? For shame with you! – ed)

The series puts a lot of intriguing ideas about death and the great beyond together and really makes you think things out at times as the answers to the puzzles are not always clear. Then again, if they were clear it wouldn’t be much of a mystery would it? Needless to say, those who are easily frustrated need not apply. 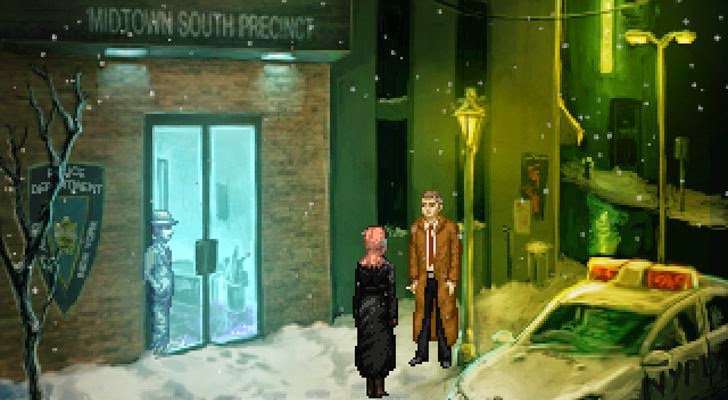 Originally, rather than playing through each game, I was going to simply read a breakdown of the individual chapters so that I could play (and review) the latest one, but the further I went into the story, the more I realised that to do so would have taken away from the experience. The Blackwell series as a whole is really like chapters in a book, and, just like you’re much better off jumping into a series like The Walking Dead from the first episode and working through it, so too are you better off playing through these games in sequential order.

One thing that stuck out with all certainty is that from the first game to the last, is that the voice acting and the dialogue are consistently well written. It has its moments where it can be cringeworthy, but thanks to the style of game those moments never detract from the overall immersion within the experience. A nice touch is that recurring characters have the same voice actors which really helps sell the whole package as a complete story and provide some consistency as the visual presentation standard does improve from one chapter to the next.

As a game, Blackwell series offers a number of different features that help to make the sometimes complex puzzle solving easier and more efficient to the players. If you follow my advice and play the series through from the first game, then please do stick through the first couple of games, because these mechanics do improve from one game to the next, and what is initially frustrating becomes much more reliable later on. 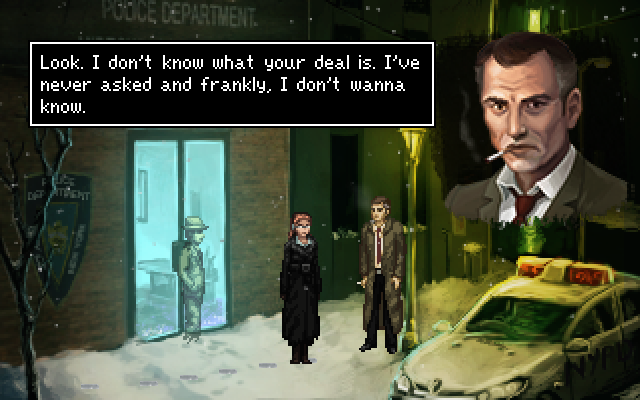 There’s an auto-updating notebook that progressively becomes filled with information vital to the investigation. Using this notebook it’s also possible to “merge” ideas to form new ones, which requires a touch of investigative thinking, and provides the insights required for working through each game. A phonebook, meanwhile, becomes the Internet, and then the mobile Internet as the games progress onwards. This gameplay gimmick allows players to do research on various things they see or hear in passing but can become important to the investigation. What was that you heard in a passing conversation? Maybe you remember seeing a poster on a wall? You know the name of a business but not where to find it? All of these are examples of ideas that could be searched for to allow you to move further into the mystery. Sometimes the ideas being searched are nothing more than additional information to create a more believable world and are effectively red herrings.

The last of the major features that is present from the second game onwards is the ability for Joey, the ghost, to pass through locked doors, walls, cabinets and desk drawers to look for objects or eavesdrop on conversations without the stress of being caught in the act. It’s a clever way of giving players additional puzzles to figure out, too. How can Joey turn on a light switch so he can read an important document? This idea gets expanded on from one game to the next, with players increasingly being able to separate Rosa and Joey, and distance becoming another factor in some puzzles. 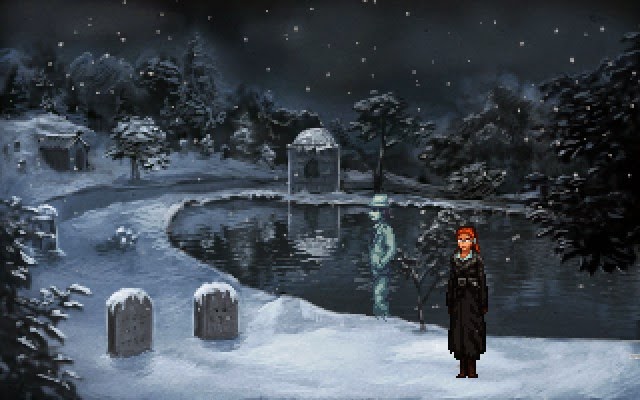 As for the final chapter itself, Blackwell Epiphany uses all of these features in a well packaged conclusion to the series. From the music to the graphics (character arts, portraits, and environments) it is definitely the shining gem of the five. Where Epiphany falls somewhat short is that the first half of the game is more focused on tracking down specific objects and interacting with them rather than other characters, and this is much less interesting as an investigation process. Thankfully the second half is all dialogue with plenty of individuals to chat with.

There were also times I had to wonder about the consistency of the narrative. and why events were happening the way they were. It felt like running into one stone wall after. It also felt overlong and it was rather disappointing that this was to be the conclusion, I said to myself.

I could not have been more wrong.

The level of storytelling once it makes it past the more clunky moments makes the whole experience worthwhile. The conclusion itself made me forgive the game for all the awkward moments that came before it. And, after playing through all five chapters in quick succession, I can guarantee that that is the best way to appreciate the overall narrative.