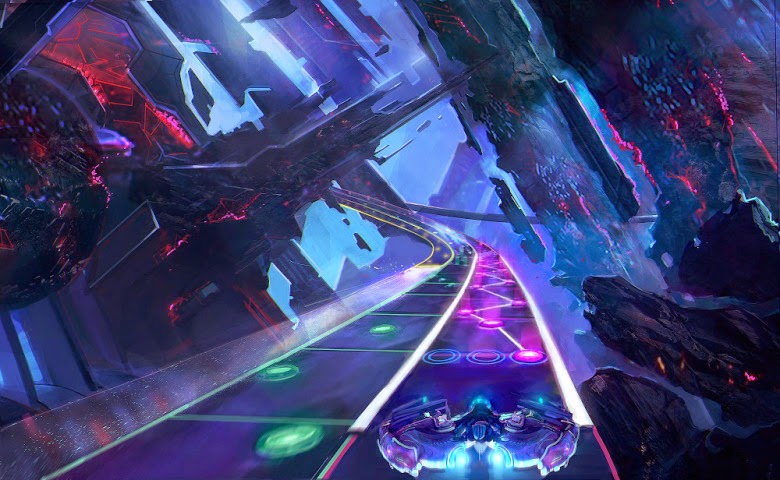 Back in 2001, before there were plastic guitar peripherals and drum sets being hooked up to gaming consoles in mass, Harmonix delivered an explosive controller-based hit rhythm game that gained quite the cult following: Frequency. Even though it amassed strong critical acclaim, sells weren’t great. In 2003, Amplitude refined and polished the game play it started with Frequency and included a soundtrack that it hoped would attract a mainstream following.

Regardless of reviewers’ praise at the time, neither game met expectations and Harmonix went on to deliver a number of franchises that did gain mainstream appeal: Karaoke Revolution, Bemani, Guitar Hero, Rock Band and Dance Central. Even though it’s hard at work on Fantasia: Music Evolved and Chroma, there is a strong desire within the team to head back to the company’s’ roots and deliver a brand new Amplitude for the world to enjoy.

In 2012, Harmonix delivered Rock Band Blitz, which brought a similar game play experience to the games of old, but things just weren’t quite the same – not that Blitz wasn’t a great game, as we gave it 4.5 Stars in our review. Amplitude was less about accumulating high scores through power ups and more about staying in tune with the rhythm of the songs with timed button presses. These games were notoriously difficult – just trying to finish a track on anything but the lowest difficulty setting was enough of a challenge for most players; attempting the highest difficulty setting was for masochist only. These games lacked the mass appeal that’s found in newer Harmonix franchises, so it’s up to the fans through the use of Kickstarter to decide if we’ll see another Amplitude brought to life.

Whether you’re a fan of Frequency or Amplitude or just rhythm games in general, head over to Amplitude’s Kickstarter page to check out its unique take on the rhythm game genre. We think you’ll like what you’ll find.