This May Day edition of the Wrap sees Nintendo releasing a bunch more info about Mario Kart 8 and the E3 happenings it has planned, some strange Amazing Spider-Man 2 happenings on Xbox One, and news about that time ET went to the dump. 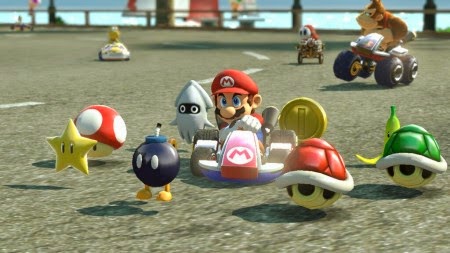 In what’s possibly the final Nintendo Direct before the big E3 show in June, Nintendo outlined a pile of new info about Mario Kart 8. The company’s big game for the Summer (and maybe the rest of the year too), Mario Kart 8 is poised to be a monstrous title for fans of the series and the Nintendo faithful alike.

The presentation treated the game as such too, with outlines of everything from the courses to the music tracks. With the amount of attention that Nintendo is giving the latest in the Mario Kart series, it’s fairly obvious that the gaming giant is putting a heck of a lot behind this one.

It’s doubtful that they’re putting all their 2014 eggs in one basket though, as there’ll more than likely be some big surprises announced at E3. For right now though, this is the big one folks- and we have a full analysis of the Nintendo Direct that brought it to you right here.

More Nintendo news for you today with the official announcement of the companies E3 event list. As usual, Nintendo won’t be having a press conference, which turned out to not be all that big of a deal after some serious media fretting at the 2013 show (me included). What they will be doing is holding another E3 themed Nintendo Direct presentation, now called a ‘Nintendo Digital Event’.
On top of that, you’ll be able to play the new Smash Bros Wii U game at your local Best Buy (if your store is participating), check out a special tourney of the game at the big event, and see all the Nintendo happenings you can take via the Nintendo Treehouse.
Click here to see what all the hubbub is about with a little more detail on what all that means. And no, it’s not a real treehouse. I don’t think it is anyway…

If you were bummed out about the Xbox One edition of The Amazing Spider-Man 2 video game getting deep-sixed by Activision, you’ve got a nice little surprise in store. The game, which was abruptly announced to be indefinitely delayed not all that long ago, is now officially available for the next-gen Microsoft console.
You can log onto Xbox Live right now to download a copy should you desire, or apparently just wait till next week to find a boxed edition at retail. Looking for an explanation? Well, you’re not going to get one as Activision hash’t said a peep about the while mess and it looks as though they’re not going to.
If you’re a Spidey fan though, you probably don’t care too much about that. Click here for the full 411 on the web-swinging fun.

The legend is true, there be ET carts in that landfill

Students of gaming history (or just plain old history) take note- the rumors of the mass dumping of ET Atari carts in the New Mexican desert are true.
Long thought to be an story and nothing more after newspaper reports were vehemently denied by some Atari staffers back in the 1980’s, the apparent plentiful unloading of unsold Atari cartridges and paraphernalia into a garbage dump in the American Southwest were indeed accurate.
A dig last week by an independent film crew shooting a documentary about the sordid fall of the video game industry in the ’80s crash drew attention aplenty from just about every major gaming news outlet and company (including Microsoft’s Larry Hyrb) as they dug into the dusty earth looking for the offending unsold merchandise. Several hours of digging and a lot of wondering about what was to be found later, and we’ve got a conspiracy tale turned true in west.
Click through for more.