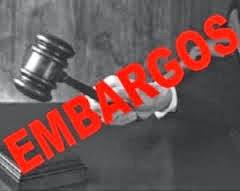 One of the most interesting press releases I’ve ever seen has just landed in my inbox. The game it was trying to sell to me, a member of the press, looked decent enough, but that’s not why I found the release so interesting.

This made me angry. So much so that no, I will not review this game. I will not announce what game it is, or who sent the press release, since that would not be ethical on my part, but the very act of sending that out in a press release is so incredibly offensive that my anger needs to be aired in public.

Look, publishers and developers, PR and marketing people. I don’t care if you’re big or small, I happen to fully believe that you have every right to request publications respect an embargo. In fact, it’s a matter of ethics on our part that we do respect an embargo. It’s an informal (or at times, formalised) contract that we are able to get early access to content in order to best prepare timely coverage of that content for our readers.

Embargoes benefit both sides of the equation. They allow the developer and publisher to provide content early, safe in the knowledge that it won’t ruin the multi-million dollar marketing campaign that might be supporting the project. Embargoes also benefit the press, though. They provide us with certainty that our coverage isn’t going to be undercut for time by the other press. No one really likes rushing out reviews and the like. It comes at the expense of quality and, often, integrity.

Developers and publishers rightfully get upset when embargoes are broken, because it means, in very real terms, a break of trust, and the expectation that the publication would behave ethically. Developers and publishers are also rightfully upset because the other publications that adhered to the embargo get upset when someone else breaks the embargo and steals the thunder from their own review to an extent.

But developers and publishers don’t do anything about it. Oh no. A half-hearted public criticism serves as a wrist slap, but that same publication will no doubt get the next game from that developer or publisher. And now, apparently, they’re promoting those unethical reviews.

I’m sorry, developers and publishers, PR and marketing people. Here’s the thing: if you want people to respect your embargoes and if you want conforming to those embargoes to be a point of ethics for journalists, then start doing something when publications break embargo. Black list them (or just the journalist in question). Don’t promote them. That’s like giving a reward to a dog because it peed all over your couch.

Want a copy of Demon Gaze on PlayStation Vita? We have two to give away!