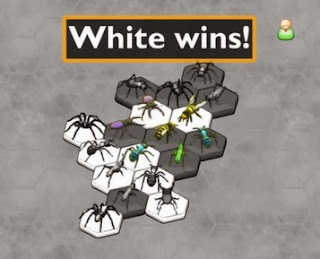 While I’m not the biggest fan of board and trading card games, I do enjoy it when they get digitised in the form of a game. These digital versions often (if not always) cost less than their physical counterparts, and while they are still better played with (or against) others, the rise of Internet play helps to counter their inherent reliance on multiplayer. As an added bonus, these games often feature some excellent artwork and visuals (here’s looking at you Magic 2014), along with single-player campaigns for those who like to hone their skills offline.

Unfortunately, when compared to the standards set by other games in the genre, Hive comes off as a bit of a disappointment, despite some deep and surprisingly original mechanics.

Unlike most tabletop games, Hive isn’t played on a set board or number of pieces. Instead, players have control over a handful of gameplay tiles, which represent a variety of insects, each with their own special abilities. After an initial setup period, during which each player must set down a few tiles, including the queen bee tile, players are then free to continue placing tiles, or simply moving theirs on the board. The goal of the game is simple – surround the enemy queen bee from all six directions (the game is played with hexagonal tiles). You can pull this off using both your own and your enemies’ tiles, and there’s a surprising amount of freedom in how you accomplish this, especially since you’re free to play as few tiles as you want.

Despite the lack of a preset board, it all feels a lot like chess, as each piece has their own rules when it comes to moving. The queen bee acts a lot like the king, limited to moving one tile space per turn. Grasshoppers live up to their name, and can leap over friendly and unfriendly tiles, taking up residence in the closest vacant spot. Beetles can only move one space, but can move on top of the hive, trapping and locking down enemy tiles if they so choose. Spiders, much like knights in chess, can move three tiles (and only three) at a time. Last but not least are ants, which are arguably the most powerful piece in the game, as it can move an unlimited number of spaces, so long as it only moves around the edges of “the hive”. 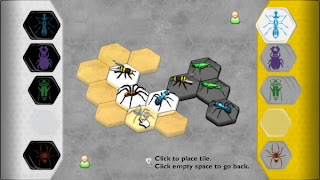 The only other rule that limits player movement is that you cannot split up “the hive”, meaning you can’t move a piece if it will cause the board to split into two or more groups. This crucial limitation drives a lot of the strategy in Hive, as crafty players will pin down enemy pieces in the middle, rendering them immobile. This actually gives way for some unbalanced gameplay, as players who find themselves in a tight spot can focus on pinning down a large amount of tiles. Sure, this won’t help in the way of forward progress, but it’s not too difficult to force a stalemate through repetition.

Still, as much as I enjoy (and appreciate) the deep mechanics surrounding Hive, everything surrounding the core game is largely flat and stale, making it hard to recommend. Aside from the option to play against an AI opponent or a human (both offline or online, though online play isn’t up and running yet) there is nothing in the way of a campaign, or a challenge mode for example. There’s no tutorial either, and instead of a practice mode that walks you through a few scenarios and strategies, players are left with a meager ruleset to read up on. And while there are 5 AI difficulties to contend with, the AI is rather easy (as a novice player, I was able to defeat the hardest computer within 20 minutes of booting up the game the first time). As an added bonus, the computer will often ignore winning moves that are readily apparent (it seems to ignore moves involving the beetle piece, though the developers have stated that they are working on improving this). The audio and visuals are disappointingly simple as well – think browser-based Flash game.

The game’s pricing model also warrants some criticism. While it’s available for $6.99 as part of the Steam Early Access Model, the final version will cost around $9.99. While this isn’t so bad when taken alone, it’s an odd choice considering the iOS and Xbox 360 versions each cost $1. There’s also a free Android version, and you can also play Hive for free over the Internet, through various Java applets. And even with the higher price point on Steam, the game doesn’t feature any of the DLC/expansion pieces (the in-game menu suggests they will release this for a price sometime in the future), and one of the expansion pieces seems to be tied to buying its physical (tabletop) counterpart, which will include a redeemable code. It’s a setup that’s both baffling, and to be frank, a bit off-putting.

It’s no wonder then why it’s so hard to recommend Hive to other players, even when taking into consideration that it’s currently in alpha. Fans of tabletop and trading card games will undoubtedly enjoy its mechanics, but you’re better off trying out one of the free (or cheaper) versions first, as they offer what is virtually the same game, with the same content. There’s definite potential with Hive, but it’s got a long way to go before it’s worth the asking price.

The 24 Games of Christmas! Day #10: Atelier Meruru Plus: The Apprentice of Arland